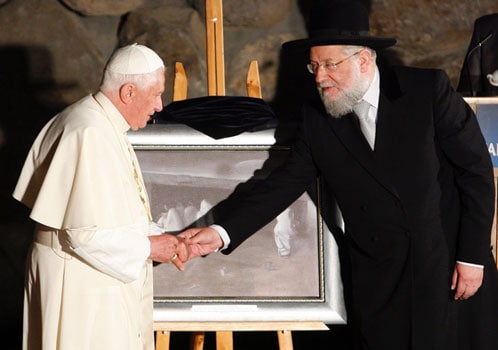 “England before the so-called Reformation period was a superstitious time, with those who objected to the heathen practices of the Roman Catholic Church subjected to all manner of persecution.” – Tony Blizzard

Edward Hendrie, author of “Solving the Mystery of Babylon the Great” takes issue with Tony Blizzard’s view that the Catholic Church was a bulwark against Talmudist/Cabalists.


“The Roman Catholic Church was established by crypto-Jews as a false “Christian” front for their Babylonian religion. Both Judaism and Catholicism are based upon Babylonian mysteries.” – Edward Hendrie


Tony Blizzard’s article, Catholic Church Was Bulwark Against Cabalists, begins with a disputable premise. Blizzard claims that “England which, before Protestantism, was known as Merrie ol’ England and was about the most contented, happiest land on Earth.”

Blizzard’s opinion, however, seems to be based to a large extent on mythology. Roy Judge, an expert on English folklore, has stated that Merrie ol’ England is a mythical world that never actually existed. Not all agree with Judge. Why is there disagreement? Because, one’s view of history is completely based upon the point of perception.

I am sure that the priests, bishops, and cardinals, from their point of view, had fond memories of their stay at the Vatican in the pre-Reformation period. There were 6,800 registered prostitutes in Rome in 1490 to service, for the most part, the clerics of Rome. Keep in mind, that was in a city with a population of only 90,000, and the figure does not include clandestine prostitutes.

If, however, you looked at the Vatican from the perspective of the prostitutes or their illegitimate offspring, you would get a less favorable view of the Vatican.

While some illegitimate children actually became future popes, others were not so lucky. In 655, the Ninth Council of Toledo decreed that the children of priests who had remained neither celibate nor chaste would become permanent slaves of the Catholic Church.

In 1548, Pope Paul III issued the address, motu proprio, which stated that anyone in Rome “may freely and lawfully buy and sell publicly any slaves whatsoever of either sex.” It is, therefore, not surprising to find that during the U.S. Civil War, the Vatican was the only nation to recognize the sovereignty of the Southern Confederate States.

I am sure that the former plantation owners in the antebellum southern states would remember fondly their experience on their plantations. The former slaves, however, would have a different, less-fond, memory of the plantations.

Getting back to the topic of feudal England, certainly the aristocracy and the Roman clerics viewed that period as idyllic and may even describe it as “Merrie ol’ England.”

What about the Christians who wanted to follow biblical Christianity? Was England merry for them? The answer is unequivocally no. How could it be merry, when there was no true freedom of conscience? England before the so-called Reformation period was a superstitious time, with those who objected to the heathen practices of the Roman Catholic Church subjected to all manner of persecution.

I would refer readers to Acts and Monuments by John Foxe, which gives an authoritative account of the oppressive Roman Catholic reign in England before the Protestant Reformation. The massive work is available online at http://www.johnfoxe.org/ . Any disagreement with the Roman Catholic theology at that time was met with swift and sure punishment.

The persecution of biblical Christians by the Roman Church in “Merrie ol’ England” did not stop at the grave. For example, in 1415 Englishman John Wycliffe (1328-1384), was deemed a “heretic” 30 years after his death by the Catholic Council of Constance. Pope Martin V ordered that Wycliffe’s body to be exhumed, burned, and his ashes thrown in a river. It was done as ordered in “Merrie ol’ England.” The pope also ordered that Wycliffe’s books be burned.

AS FOR THE TALMUDISTS

Blizzard states that Talmudists viewed “that Christ-instituted Church” as its only real enemy. Certainly biblical Christianity is the principal enemy of the Talmudists.

Talmudic Jews, over the years, have been in conflict with the Roman Church; but periodic conflict does not change the historical synergy between the two in their fight against their common enemy: biblical Christianity. The synergy between the Vatican and Talmudic Jews is in part explained by the fact that the Roman Catholic Church was established by crypto-Jews as a false “Christian” front for their Babylonian religion. Both Judaism and Catholicism are based upon Babylonian mysteries.

The Judaizing strategy resulted ultimately in the establishment of the Catholic Church. There is historical evidence for the common Babylonian lineage between Judaism and Roman Catholicism.

After the fall of Jerusalem, Cabalistic Jews migrated to Alexandria where they synthesized their Chaldean witchcraft with Neo-Platonic philosophy and cloaked that religion in Christian terminology.

They then tried to introduce this new heathen gnostic philosophy into the fledgling Christian Church. The penetration of the true spiritual church of Christ was futile. What this Jewish gnosticism did accomplish was the creation of a new ersatz “Christian” church, which grew into what we know today as the Roman Catholic Church. Those facts have been concealed from the historical accounts of the Catholic Church.

Another example of the Talmudic influence over the Roman Catholic Church is the worship of Mary. The Mary of the Catholic Church is not the Mary of the bible. She is in fact the Jews’ queen of heaven. Athol Bloomer reveals that Mary is equivalent to the Sabbath Queen in Judaism. The Kabbalah also has a warrior queen called Matronita who commands the hosts of heaven on behalf of Israel against its enemies.

Bloomer states that “Matronita is an image of both Mother Church and the Mother of God.” Bloomer equates Matronita with Shekinah and Mary. Daniel Matt in his book Zohar, The Book of Enlightenment reveals that the Sabbath Queen and Shekinah are one and the same.

The Catholic Mary (as distinguished from the biblical Mary) is a heathen goddess, who in 1950 was “infallibly” declared by Pope Pius XII to have been assumed body and soul into heaven and crowned “Queen over all things.”

The Catholic Church has a series of ritualistic mysteries that are recited after each of 15 Catholic “stations of the cross.” These “mysteries” are said while counting beads that are called the rosary. The primary focus of the Catholic Rosary is not Jesus, it is Mary. Mary’s roles in Christ’s birth, death, and resurrection are highlighted, exaggerated, and in some instances fabricated in 12 of the 15 “mysteries.” In fact, the formal title of the Rosary is: “The Roses of Prayer for the Queen of Heaven.” One of the “mysteries” recited during the Catholic rosary is called “the Fifth Glorious Mystery – The Coronation.” In that mystery it is claimed by the Catholic Church that “Mary is the Queen of Heaven.”One of the final prayers of the Rosary is a prayer to the Catholic goddess “Mary” called “Hail Holy Queen.”

The Mary of the bible is not a goddess, she was a woman elected by God to be the mother of Jesus. She died like everyone else and any attempt to communicate with her through prayer is the sin of necromancy. Deuteronomy 18:10-12. “For there is one God, and one mediator between God and men, the man Christ Jesus; (1 Timothy 2:5).

What does God think of this Catholic goddess, Mary? “Thou shalt worship the Lord thy God, and him only shalt thou serve.” (Luke 4:8)

Blizzard claims that the doctrine of the Protestants was corrupted by Talmudists. There is no doubt that factions within the Protestant Reformation were undermined by Judaic/Babylonian religious beliefs.

However, Blizzard has it backwards. The Judaic/Babylonian corruption flowed from Rome. For example, Augustus Toplady (1740-1778), the author of the famous hymn Rock of Ages, concluded that Jacobus Arminius (1560-1609) was a secret agent of the Jesuits. Arminius’ purpose was to infect the Christian church with heathen Catholic doctrine. Arminius was not the only Roman Catholic agent of deception sent to undermine Christian doctrine; there have been many others.

Toplady’s conclusion about Arminius was not just based upon circumstantial inference. The Jesuits themselves have revealed that Arminius was their secret agent sent to poison the doctrine of the Protestant churches. William Laud (1573-1645), the Archbishop of Canterbury, was working secretly with the Jesuits to infect the Church of England (Anglican Church) with Roman Catholic doctrine, including Arminianism. Laud was executed for treason.

A secret Jesuit correspondence found after Laud’s death confirmed Arminianism was a “soveraigne drugge” designed to undermine the Church of England. The Jesuit reiterated in the letter for emphasis the importance of Arminianism: “But, to return unto the maine fabricke:–our foundation is Arminianisme.”  As we see today the Jesuits have been largely successful. There are only slight differences today in the doctrines of the Anglican Church and those of Rome.  The Anglican Church today has completely gone over to Arminianism.