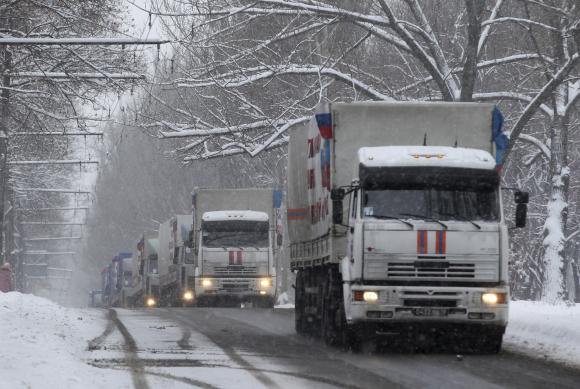 While the world shops and busily prepares for Christmas, the TV News is relatively silent about any significant world events. We’ve all but stopped hearing about Ebola. Situations in the Ukraine, Baltic States, Lybia, Iraq, Turkey, Gaza and Syria (did I miss anybody?) for the time being, remain unchanged and have been relatively quiet for the last couple months. But while the MSM ominously ignores these developments, alternative news sites have been turning out a steady stream of articles suggesting that Russia is (quietly) preparing and building up to start World War Three (below). The Bible tell us that World War III will happen, the only question is when.

” And there went out another horse that was red: and power was given to him that sat thereon to take peace from the earth, and that they should kill one another: and there was given unto him a great sword.” Rev. 6:4

(Reuters) – Ukraine said on Sunday that a convoy of 106 vehicles had entered its eastern territory from Russia without Kiev’s permission and accused Moscow of once again using humanitarian aid shipments to send weapons and ammunition to separatist rebels.

In the separatist-held city of Donetsk, fighting intensified at the local airport, a Reuters witness said. There has been continued shelling from both government forces and the rebels, even after a peace deal signed on Sept. 5.

Months of fighting in Ukraine’s separatist regions have left many without sufficient food and medical supplies. Russia has regularly dispatched shipments of aid, a move which the pro-Western Kiev government has denounced as cynical.

“The lion’s share of humanitarian supplies find their way to the rebels partly in the form of food, but mostly it is ammunition, equipment and other things for combat operations,” Ukrainian military spokesman Andriy Lysenko said in a televised briefing.

The latest delivery of Russian supplies is the eighth since mid-August, Russian news agency RIA cited Russia’s emergency ministry as saying, adding that a total of 9,500 tonnes of mainly food, building materials and medicine had been delivered by the first seven convoys.

A Reuters witness in Donetsk said repeated volleys of artillery fire could be heard from the direction of the local airport, a strategic point that both Ukrainian troops and rebels lay claim to.

Both sides have accused each other of violating the terms of the truce, raising fears it could collapse entirely.

Lysenko said three Ukrainian servicemen and an 82-year-old civilian had been killed in the past 24 hours.

He also said Ukrainian positions in Mariupol, a strategic city on the Sea of Azov, were once again coming under attack from rebel shelling.

Russia to carry out large-scale military drills in 2015

(Reuters) – Russia said on Monday it would carry out more than 4,000 military drills next year, with the largest involving “tens of thousands” of servicemen next summer.

Russia has increased the number of military drills to test and improve its military capabilities as ties with the West deteriorated over the crisis in Ukraine.

“The exercises will take place in the summer period simultaneously on several training grounds within Russia and abroad,” Yaroslav Roshupkin, a spokesman for Russia’s Central Military District, said of the planned “Centre 2015” drills.

“They will be extended in time and bring together under unified command tens of thousands of servicemen of the Central Military District, branches and types of the armed forces, as well as other security ministries and agencies.”

He said new weapons would also be tested during the exercises.

The Defence Ministry said next year’s plans mark an increase from more than 3,000 drills carried out this year.

Russia is launching a new national defense facility, which is meant to monitor threats to national security in peacetime, but would take control of the entire country in case of war.

The new top-security, fortified facility in Moscow includes several large war rooms, a brand new supercomputer in the heart of a state-of-the-art data processing center, underground facilities, secret transport routes for emergency evacuation and a helicopter pad, which was deployed for the first time on Nov. 24 on the Moscow River. The Defense Ministry won’t disclose the price tag for the site, but it is estimated at the equivalent of several billion dollars.

The new National Defense Control Center (NDCC) is a major upgrade on what was previously called the Central Command of the General Staff, a unit tasked with round-the-clock monitoring of military threats against Russia, particularly ballistic missile launches, and deployment of strategic nuclear weapons. It was roughly a counterpart to the US National Military Command Center, the Pentagon’s principal command and control site.

The NDCC inherits all those functions, but also has plenty of extra roles as well. In peacetime, an additional task is to monitor all of Russia’s important military assets, from hardware being produced by defense contractors to the state of oil refineries, to weather conditions and their effect on transportation routes.

And if Russia does get into a war, the center would act as a major communication hub and a form of wartime government, delivering reports to the country’s military command and giving orders to all ministries, state-owned companies and other organizations, according to the needs of the armed forces.

“The creation of NDCC was one of the biggest military projects of the past few years. The closest analogy in the past in terms of functions and tasks was the Commander-in-Chief HQ in 1941-45, which centralized all controls of both the military machine and the economy of the nation in the interests of the war,” Lt. General Mikhail Mizintsev, the NDCC chief, told Lenta.ru in an interview. The military says the upgrade has been long overdue. The national security situation may be very fluid in modern times, and instead of days the leadership may have only an hour to take crucial military decisions. The center’s job is to offer the Defense Minister and the President options in case of emergency, which would be based on facts, figures and accurate projections.

Potentially the biggest part of the upgrade was the creation of communication and data processing equipment that would give the military computer power and software needed to factor in hundreds of parameters in their mathematical models. The Defense Ministry had to use only domestically-produced hardware due to security considerations, which limited its options.

According to officials, the result is a very robust computer network with state-of-art data encryption and multiple backup sites spread throughout the country, which would keep the center functional even if its main facility in Moscow is damaged by an enemy attack or sabotage. The center employs over 1,000 officers working on a rotating watch system. Mizintsev said the armed forces selected their best officer for the posts, many of which are new for the Russian military and require skills not previously taught to officers on a regular basis until recently. They have been operating in trial mode since April.

A thoroughly military facility, the NDCC has an unexpected civilian component to it. Its location in Moscow is close to two major hospitals, including the Pirogov trauma center. Both hospitals are quite old and their original designs didn’t provide for dedicated helicopter pads.

The Defense Ministry said the medics can share NDCC’s new pad on the Moscow River for emergency patient transportation. The pad can accommodate helicopters weighing up to 15 tons, enough to land a Mil Mi-8, world’s most-produced transport helicopter, or a Mil Mi-38, its designated replacement. Russian President Vladimir Putin has a concrete plan of invading Europe, taking it under his total rule. The covert plot was exposed by Germany‘s well-known newspaper, the BILD, citing credible sources from the intelligence community.

NATO To Russia: ‘Pull Back Your Troops’

Mr Putin’s grand plan was reportedly outlined in a supposedly classified document titled “Putin: the new leader of international conservatism.” The blueprint was drafted by Moscow’s Centre for Strategic Communications.

“In Europe Putin dreams – and he has said this publicly – of having a sphere of influence across the continent all the way down to Portugal,” the newspaper BILD reported as quoted by the Express. According to BILD, Mr Putin’s strategy involves wooing different far-right political parties across Europe to support Kremlin’s political influence within theEuropean Union.

According to BILD’s report, Mr Putin’s strategy includes hoarding gold through front companies, thereby giving the acquired gold to the parties it can woo as means of financial support. The report also suggested that various Russian banks and other financial institutions agreed to provide cheap loans to the different political parties that will be one with Mr Putin. Curiously, a loan amounting to nine million euros was approved by the First Czech Russian Bank of Moscow to a far-right political party in France, the Front National or FN, the Express reported.

Mr Putin had also reportedly met with right-wing parties in Vienna in May, including political parties in Bulgaria, Austria and France. However, his main focus was allegedly set toGermany‘s only “mildly-eurosceptic party,” Alternative for Germany or AFD, to get its vote in March against another looming western sanction.

Vladimir Jakunin, Mr Putin’s ally and “most important western networker,” was reportedly delegated to coordinate all willing political parties in a convention recently held in Berlin. Jakunin is widely known for his effective propaganda schemes that he was trusted to bolster the bonding among the “friends of Russia.”

All political parties wooed and potentially will support Mr Putin were named in a separate report run by The Independent. Aside from FN and AFD, the neo-Nazi National Democratic Party or NPD and the Social Democrats or SPD were also wooed by Mr Putin. These parties were also said to attend the convention in Berlin held over the weekend.

BILD was reportedly banned from covering the convention in Berlin because of its recent criticism against Jakunin. The newspaper had apparently condemned Jakunin for saying that homosexuals have an “abnormal psychology.”