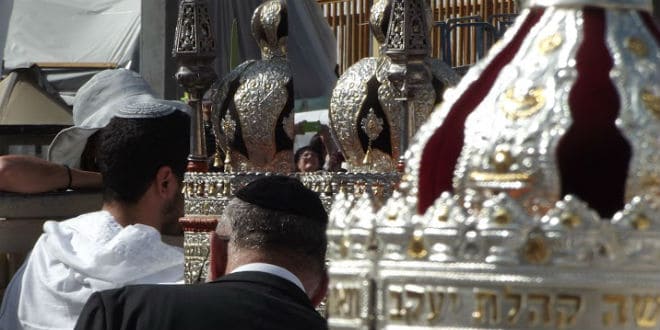 It couldn’t get any plainer than this. Israeli Rabbi’s are preparing for the coming of their false Messiah. No mention of Jesus, the true Messiah. That’s no problem, according to the Vatican who has declared that Jews don’t need Jesus to save them.

“The Simon Wiesenthal Center applauds a new Vatican document that instructs Catholics not to target Jews for conversion, affirms G-d’s continued covenant with the Jewish people, and asks Catholics to work with Jews to eradicate anti-Semitism.”

This recent ReligionNews.com article with a decidedly “Judeo-Christian” slant, further states that Replacement Theology demeans Jews and Judaism and “severs any connections of Jews with their land.” – read full article about the vatican document here

Torah Scroll Being Written to Present to Messiah Upon His Arrival

“Now it will come about that In the last days the mountain of the house of the Lord will be established as the chief of the mountains, And will be raised above the hills; And all the nations will stream to it. And many peoples will come and say, ‘Come, let us go up to the mountain of the lord, To the house of the God of Jacob; That He may teach us concerning His ways And that we may walk in His paths.’ For the Torah will go forth from Zion And the word of the Lord from Jerusalem.” (Isaiah 2:2-3)

Rabbi Yosef Berger, one of the rabbis in charge of King David’s Tomb in Jerusalem’s Old City, has been dreaming of a project for over a year – one Torah scroll to unify all of Israel.

Recent global events have forced Rabbi Berger to move ahead quickly with his dream as he wants to be able to personally present this Torah as a gift to the Messiah. Many prominent rabbis and Kabbalists have told Rabbi Berger that may be very soon indeed.

The inspiration for the project came from the Book of Hosea (3:4-5), in which it is written:

“For the sons of Israel will remain for many days without king or prince, without sacrifice or sacred pillar and without ephod (a sleeveless garment worn by Jewish priests) or household idols. Afterward the sons of Israel will return and seek the Lord their God and David their king; and they will come trembling to the Lord and to His goodness in the last days (before Messiah).”

Rabbi Berger explained to Breaking Israel News what this prophecy had a personal meaning for him.

“In the end of days, when Israel realizes that all hope is lost and they have no solution or salvation from their plight, the people of Israel will be wise enough to seek the three things which our ancestors despised: the Kingdom of Heaven, the Kingdom of David, and the building of the Temple,” he said.

“It is taught in the Yalkut Shimoni (a collection believed to have been arranged in the 13th century) Samuel 1: 106, ‘Rabbi Shimon Ben Monsia said, “No signs of redemption will be shown to Israel until they seek these three things – the kingdom of heaven , the dynasty of King David, and the building of the Temple.”’”

Rabbi Berger believes that by bringing all of Israel together in the writing of a single Torah scroll housed on Mount Zion, where King David is interred, and adjacent to the Temple mount, he will accomplish all three goals in one action.

Rabbi David Hai Abuhatzeira was honored with writing the first letter of the Torah. Rabbi Abuhatzeira is the grandson of the prominent Moroccan Sephardic mystic Rabbi Israel Abuhatzeira, known as the Baba Sali, renowned for his ability to work miracles through his prayers.

For Kabbalistic reasons which he refused to reveal, Rabbi Abuhatzeira chose to write the Hebrew letter ‘yud’, rather than the first letter, which is a ‘bet’. Rabbi Abuhatzeira urgently instructed the organizers of the project, “Write the Sefer Torah as fast as possible, you don’t have much time!…I hope you have a chance (to finish)!”

“The Messiah will also take part in the process,” Rabbi Abuhatzeira explained. “The nation of Israel will give him this Torah as a gift, as it is written “Whither kings shall bring presents unto Thee” (Psalms 68:29) and “Bring presents unto Him that is to be feared” (Psalms 76:11).”

According to Rabbi Berger, Rabbi Abuhatzeira added that the combined numerologies of the phrases “This year we will merit seeing him” (השנה נזכה לראות אותו) and “The arrival of the Messiah” (ביאת המשי), add up to 5776, the current year according to the Jewish calendar.

Hundreds of letters have already been written in the Torah scroll. Jewish tradition teaches that a Torah scroll contains 600,000 letters, equal to the number of Jews who received the Torah at Mount Sinai.  However, the actual number of letters in a Torah is 304,805, leaving many more opportunities for people to be included in the Klal Yisrael project.

Rabbi Berger realizes that preparing a gift for the Messiah is not a normal type of charity, and his expectations are unique. “Even if someone gives me a million dollars to write many Torahs, it isn’t what I want. I want all of Israel individually to have a part in this Torah,” he explained to Breaking Israel News.

When the Torah is completed, Rabbi Berger plans on having a parade through Jerusalem to dedicate it. The parade will go through every corner of the city in order to include as many people as possible and will finish at the Tomb of King David, where the Torah scroll will be kept.

“We want it to be such a wonderful event that all of Israel will be praising God and asking for him to come and redeem us.”