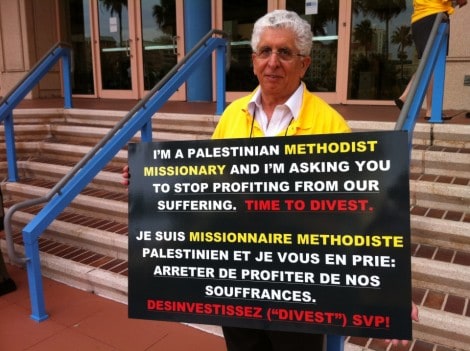 It is imperative that Christians become informed about what is really going on in the middle east and the distortion of scripture which is popularly taught, asserting that “God given rights” have been given to secular, British Israel.

Rev. Dr. Alex Awad served as the pastor of the East Jerusalem Baptist Church and was affiliated with Bethlehem Bible College for over 30 years.

1. Palestinians are obliged to continue enduring over half a century of Israeli occupation in which their rights have been consistently trampled upon.

3. Palestinians should remain passive when a family home in a small Palestinian village is fire-bombed by extremist Israeli settlers, resulting in the scorching deaths of an 18-month old child, his father and mother, and the orphaning of their 4-year-old son.

4. Palestinians have no right to defend their land from being illegally and underhandedly seized, piece by piece, by Israeli government-backed settlers and realtors.

5. Palestinians have no right to take measures against the 24-foot-high, 400-mile-long wall/fence built by Israel in the West Bank, dissecting and fragmenting what little is left of their homeland.

6. Palestinians should stand by passively as Israeli military bulldozers routinely demolish their homes and uproot their trees.

7. Palestinians are expected to watch calmly as radical Jewish settlers burn their olive orchards, poison their sheep, and pollute their farms.

1. Are we the only people who have no right to bear arms to defend ourselves or have an army to secure our territories while Israel, with the strongest army in the Middle East, receives 3-5 billion dollars annually in arms shipments from the US?

2. Do we have no right to protest when the bulk of our water resources are taken away from us by Israel to be used by settlements and Israeli towns?

3. Should we be content with the daily suffocations caused by inhaling tear gas when our young people nonviolently protest the occupation of our homeland?

4. Should we pretend that it is normal not to have any local or international legal recourse when our men and women are incarcerated in Israeli jails for years, many without trial and without due process of law?

5. Must Palestinian Muslims stay docile and keep quiet as Israeli settlers, soldiers, members of the Knesset and high ranking ministers threaten to destroy the Al-Aqsa Mosque, the third holiest site in Islam, and rebuild a Jewish temple in its place?

6. Are Palestinian Christians expected to sing the praises of the State of Israel while their clergymen and nuns are spit upon in the streets of Jerusalem and their houses of worship torched and assaulted by Jewish religious extremists?

7. Should Palestinian citizens of Gaza, many of whom are refugees since 1948, be at ease with living besieged for over a decade under a choking Israeli blockade? When they protest the blockade, albeit sometimes violently, should they keep quiet as their neighborhoods are bombed to rubble?

With what they leave out, US politicians might as well be shouting from loudspeakers that Palestinians have no right to expect their hopes of freedom and independence to come to fruition. This is thanks in large part to US bias, self-serving political maneuverings and lopsided brokering of the Arab-Israeli conflict. Noteworthy is that US politicians seem to be in total denial of the correlation between this double standard and the rise of extremism among Arabs and Muslims around the world.

The inspired words of the prophet Isaiah 2800 years ago, describe well the injustices that are taking place in Palestine today:

No one calls for justice,
Nor does any plead for truth.
They trust in empty words and speak lies;
They conceive evil and bring forth iniquity.
The way of peace they have not known,
And there is no justice in their ways;
Isaiah 59:4,8a NIV.

Rev. Dr. Alex Awad lived and served in Palestine for decades, including over 25 years as missionary with the United Methodist Church. Alex served as the pastor of East Jerusalem Baptist Church, as well as Professor, Dean of Students and Director of the Shepherd Society at Bethlehem Bible College. Alex helped to organize three “Christ at the Checkpoint” conferences in Bethlehem, and is the author of two books: “Palestinian Memories: The Story of a Palestinian Mother and Her People” and “Through the Eyes of the Victims.”