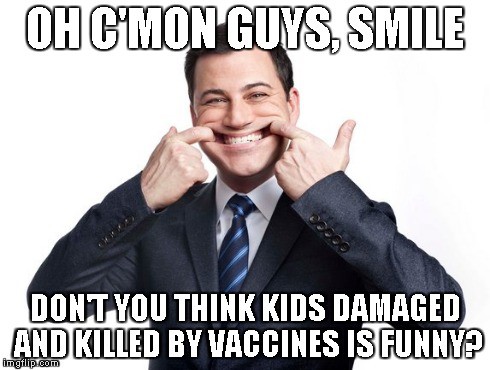 I find this hard to believe, but then, I shouldn’t since it’s just yet another sign of the times we are living in. We have seen the bigoted oppression of different groups of people over the years and it is always inexcusable, but this takes it to a whole new level. Hopefully people will begin to question just who and what agenda are behind the media and celebrities. Pray for the awakening of the church and warn young parents about the dangers of vaccines.

DOES JIMMY KIMMEL THINK KIDS BEING KILLED BY VACCINES IS FUNNY?

Over the past few weeks, we’ve seen various comedians and pundits find ways to mock the parents in this country who have chosen to not vaccinate or even just alter the vaccination schedule of their children.

The other night, Jimmy Kimmel performed a scathing monologue insulting parents who choose not to vaccinate. Kimmel didn’t pull any punches as he fired one insult after another in what was a shocking display of insensitivity towards parents who have made a personal choice for reasons that perhaps Jimmy Kimmel can’t comprehend. He said these parents:

Then he added insult to injury with a mock PSA featuring doctorswho proceeded to insult these parents more with bleeped out expletives. These real doctors proceeded to:

Then the doctors ended the PSA saying among other things “Get your god damned kid vaccinated“.

ALSO – Did This Pharmaceutical Company Market The Disease Before The Drug?

Some people might think this is funny. Just some clever late night humor that really doesn’t hurt anyone, right? Just those idiot parents making stupid uninformed decisions because they saw something on Google. Heck, those anti-vaxx parents are asking for it anyway. Right Jimmy?

How about we have the adult conversation now. There’s something you overlooked in your overzealous rush to jump on the “attack the anti-vaxxers” bandwagon.  There’s a human side of this that somehow got lost when the mob mentality took over. Here’s what I’m talking about.

Jessica’s parents came home from work to find her dead on the bathroom floor. Their shocking discovery occurred only 2 days after Jessie’s third and final injection of the HPV vaccine, Gardasil.

Kaylynne developed a headache and fever after a flu shot. It spiked to 102.3 and the little girl started vomiting and became disoriented.On the 15-minute ride to the doctor’s the unexpected happened. Kaylynne stopped breathing in her mother’s arms.

He passed away in the night, less than 13 hours after his mother was bullied at the doctors office to give him 5 vaccines, even though she only felt comfortable with one at a time.

I ask you Jimmy Kimmel, are these parent’s idiots?

Did they come to their opinions because they “listened to some moron who read a forwarded email“?

Are you prepared to ban these parents from going to the emergency room because they now question vaccines?

Here’s one more for you in case you don’t get it yet:

Ryan Johnson from Nashua, NH died on October 31, 2011 following his routine vaccines at age 15 months. His parents still grieve. They always will. And in the midst of their grief they have to put up with other’s negative comments about protecting their new son, Drew from vaccine death.

“Willing to bet any of you that are complaining about unvaccinated children would feel totally different if you were in our shoes.

“How about getting a call from your wife hysterically saying your son was found dead?”

“How about being the first one to arrive at the hospital just to be told they are doing the best they can for your little boy?”

“How would you feel going in the room while they were working onhis lifeless body while you were holding his hand telling him to please come through this?”

“How would you feel if you have to make a decision when to stop resuscitation on your little boy’s life?”

“How would you like to hold your son’s dead body in your arms to sing him his favorite lullabies one last time before they bring him foran autopsy to butcher his little innocent body?”

“How would you feel the next day while you were picking out his little casket and the Medical Examiner called you to tell you that physically he has been one of the healthiest looking specimens she has ever worked on?”

“How would you feel when 7 months later you are told that they cannot find a reason why your son died?”

“How would you like to live everyday knowing these facts?”

“Your healthy baby boy who was never sick and never had any infections of any kind is now dead, less than 72 hours after receiving 6 vaccines.”

“And again, other than that there are no facts. Except that no cause of death was found in his autopsy.”

“Now put yourself in our shoes and tell me you wouldn’t feel differently.”

“I really hope none of you have to go through what we have been going through.”

“It took 11 months to get pregnant. Ryan was a happy baby even laughing out loud at 2 weeks old. On Friday, October 28th he had his 15-month check up and received 4 shots the DTaP, HIB, flu and pneumococcal conjugate, he cried like crazy. That night he was cranky but slept through the night. The next day he was ok but it seemed that his leg was hurting I didn’t think anything of it.

“On October 31st, 3 days days later it was a normal morning I took him to day care. I dropped him off and he didn’t seem himself and even the babysitter noticed. I got a call around 2:40 it was the babysitter saying “Ryan is dead” she kept saying it. I thought it was a joke but it was a nightmare. I rushed to the hospital. Our babysitter had put him in a car seat so he was sitting up so he could take a nap but when she went back to check on him his eyes were rolled back in his head, she said she started CPR on him. At the hospital they worked on him for an hour but we had too make the decision to stop CPR as there was no chance for him at this point so October 31,2011 at 4:20 pm Ryan Thomas Johnson, 15-months old passed away.

“That was just the beginning we had to go to the police station after the hospital to be questioned. I knew in my heart our babysitter did everything she could for Ryan. We still have a great relationship and she takes care of Ryan’s Brother Drew.

“It took 4 months to get results on Ryan but it came back as SUDC (sudden unexplained death of a child) the medical examiner said he was a healthy baby so why did Ryan die if he was healthy. Ryan Thomas died 3 days after his vaccinations, which is when the post inflammatory response is most robust after vaccinations. The what if’s- what if I didn’t give him the shots that day would he still be here with us? I trusted my doctor and they said it’s rare to have reaction. Educate BEFORE you vaccinate.”

Jimmy Kimmel, I don’t believe you are an evil person who likes to laugh at dead children. I believe you are misinformed. At the very least, you are not being fair, objective and definitely not compassionate.

When you mocked parents who don’t vaccinate or question vaccines, you mocked the broken hearts of these and many other parents who have unwittingly paid the ultimate price for an ill-defined “greater good”. You mocked the loved ones who were impacted by the death of a child who did not need to die. You mocked the instinctual fear that every parent has to protect their children from harm.

Jimmy, you jumped on the bandwagon and went for the easy target – parents who are presently being attacked on all sides for doing what they feel is right for their kids. You joined in with the mob and you picked up a rock and you threw it – because it was easy and everyone else was doing it too.

If you want to debate the statistics, fine. The science, ok. Where you crossed the line is when you decided to get a few laughs at these parent’s expense.

It was low and disgusting and you owe them an apology.