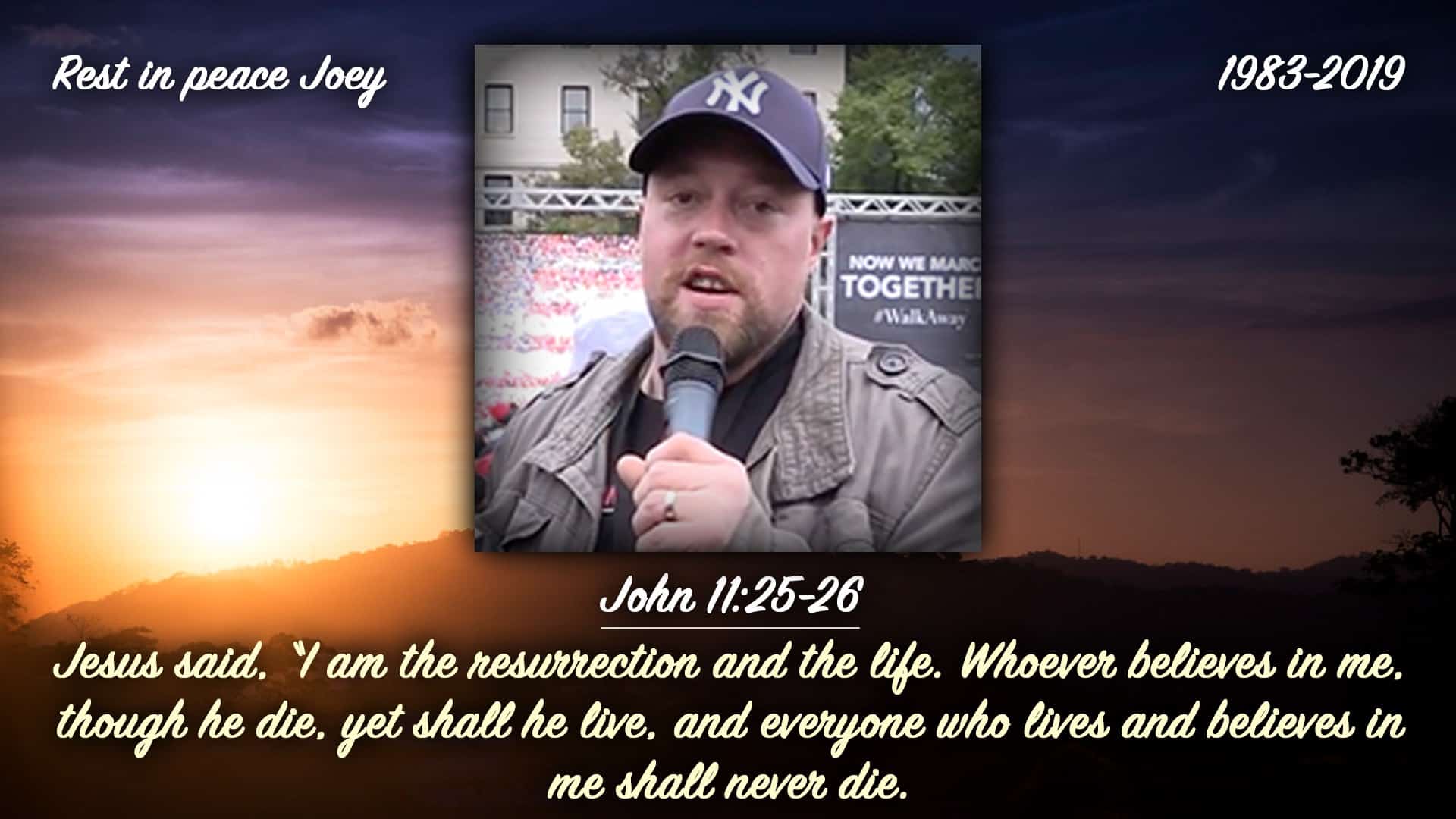 I had the honor of meeting Doug and Joe Hagmann in 2013. My heartfelt condolences and prayers go out for Doug and his family.

This is a rush transcript from “The Hagmann Report,” July 1, 2019. This copy may not be in its final form and may be updated.

DOUGLAS J. HAGMANN, HOST: For the second time in the past 90 days, I come before you opening The Hagmann Report using virtually the same words as I did on April 12, 2019.  Except today, I will not be using any modifying phrases as this is, and I suspect will always be, the most difficult and personally painful announcements I’ve ever had to make since the beginning of The Hagmann Report. Again, my message is made in the spirit of transparency as my viewers and listeners deserve nothing less.

I am sad to inform you that my son and oldest child, and once my co-host of the Hagmann Report, died Saturday at the age of 36 from what appears to be a heroin overdose. Words cannot express the pain this has brought me, my family, and Joe’s wife, who is due to give birth to his child within the next few weeks. Again, my son Joe Hagmann died on Saturday, June 29, 2019, at the age of 36 by what appears to be a heroin overdose.

Many of you who met Joe know that he had a good heart. He brought much joy to many people in his adulthood and in particular, while he was an integral part of The Hagmann Report. I hope everyone will remember him for that joy he brought and for his genuine warmth and caring spirit. I certainly have seen his good works in action and choose to remember those over everything else. I will remember the joy he brought when he was born, as a child with a calic in his hair and a mischievous smile, as a typical adolescent and finally, as a grown man. The fact that he was taken from us too young, and in the manner alleged, is shocking and painful beyond words. To say that we are grief-stricken would be an understatement.

In addition to this sad announcement, I am here before you today to deliver three very important messages. Two messages are for everyone watching and listening to this announcement. The third message is intended for a much smaller group of people. You will know to which category you belong. I ask that you carefully listen to these messages and fully understand the stated and unstated implications of each.

But first, I want to thank all of you from the bottom of my heart for your trust, belief, and support in The Hagmann Report. To remind the longtime listeners and viewers of this show, The Hagmann Report is indeed a family operation consisting of my wife Renae, my daughter Jackie, and her husband, Eric the Tech. What began with just me and a microphone after 9/11 evolved from a private investigative and intelligence agency developed into what the show is today. Joe played a very important and often understated role at The Hagmann Report.

Joe had the ability to use his past mistakes as a unique tool to connect with others and to offer a different perspective that often opened doors that would have otherwise remained closed. Because of his past mistakes which he never tried to hide or keep hidden, he made connections and related to others in ways I could not. That frustrated his and our detractors, much to his delight.

Although his passing leaves a gaping hole in our hearts, it has also strengthened our resolve to continue to be the best source of genuine information available about current events, domestic and worldwide. To expose not just the criminality of events, but the demonic forces behind them. And Joe knew the demonic forces all too well as evidenced by one of the last father-son conversations I had with him.

Although I have not shared the details of our conversation with anyone until this moment, it was perhaps the most meaningful and insightful conversations I’ve ever had with him as a father.  It was clear to me that Joe understood that we are all soldiers in an ongoing battle against the forces of evil. From our conversation, it was clear to me that he knew what other people don’t, or others refuse to acknowledge exist. Behind the criminality of this world are the dark forces of real evil personified. He professed his Christian faith yet struggled against these forces. I did everything in my power to help him overcome evil so pervasive and insidious that it defies description. Joe experienced firsthand that when the forces of evil are threatened, the attacks are multiplied against you.

This brings me to the messages I wish to convey.

First, The Hagmann Report will continue in the loving memory of my son. My resolve – our collective resolve – is only strengthened by his death. We will not acquiesce to the forces of evil, but double and triple down against them. We will work harder, longer, and more effectively than ever before.

Secondly, due to the suspected cause of his death, I want to make my view abundantly clear. The so-called war on drugs, in its current form, is being fought on the wrong battlefield, by the wrong people, and against the wrong enemy. It is either being deliberately misdirected or ineptly conducted in its execution.

The recent unprecedented spike in heroin overdoses is not the problem, but the symptom and the sad consequence of a much larger problem that few want to address. The root of the problem is the evil behind it, those who perpetuate it and those who refuse to acknowledge it. Like mass shootings and all other unspeakable horrors, it is the direct consequence of a deep spiritual and moral bankruptcy of a people who have ripped God from all areas of our nation, who cloak immorality and Godlessness with insane claims of impossible diversity and coexistence, for evil and good cannot coexist.

Lastly, I have learned a number of troubling things over the last 24 hours about the death of my son. To again remind everyone, I’ve been an investigator for almost as long as my son was alive. To be clear, one must be careful not to allow grief or emotion to skew facts or attempt to place blame onto others as a coping mechanism or to ascribe blame to others due to the intense emotions of the moment. It’s an easy thing to do and I’ve seen it happen many times. However, I am profoundly troubled by certain information that I’ve seen and authenticated and will work to open an equivocal death investigation of my son. To those who are involved, and you know who you are, my message is simple. I will not rest until I obtain the truth and individuals are held to account, and you can be certain that you will.

Additionally and incredulously, I’ve been made aware of individuals who are attempting to solicit money – donations – ostensibly to cover the costs of Joe’s internment. There is a woman claiming to be Joe’s fiancé requesting funds. I am enraged. As his father, I am taking care of those costs, along with his widow. So contrary to and despite persistent rumors, Joe was not engaged and did not have a fiancé.  He was married and has left behind his widow and an unborn child in addition to his family. Furthermore, we need no assistance and ask for none.

To be clear, The Hagmann Report is NOT soliciting ANY money from anyone to cover the costs of Joe’s arrangements. There are NO LEGITIMATE Go Fund Me, PayPal, or other such accounts. Any solicitations you might receive are not just sickening and despicable, but in my view is a criminal scam that will be legally and swiftly addressed. They are also designed, in my opinion, to cause doubt about the integrity of our enterprise.

If you have received any such requests, or receive them in the future, I ask that they be sent to me so I can forward them to our District Attorney and my legal team for potential civil and criminal action. You too will be dealt with.

If you are uncertain about any information, I direct you to our website, (https://www.hagmannreport.com). It is only there where you will find the truth – not on anyone else’s social media account, or by emails or text messages.

As to where we are headed and while I must direct my attention elsewhere this week, I am turning the show over to the most capable guest hosts – again – for this week only.

Tomorrow and Thursday, Peter Barry Chowka will be hosting the show. Wednesday, it will be Steve Quayle and Pastor Lankford. And on Friday, Austin and Ted Broer will guest host The Hagmann Report. I thank each of them for stepping up at this most difficult time. I will be back after the July 4thholiday in full force.

The Hagmann Report appreciates everyone who has continued to stand with us. We thank you for your support and prayers.