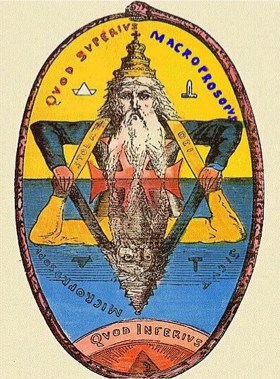 “If the world doesn’t make sense (i.e. Pedogate, ISIS, fake news, gaslighting, migration, ff terror, demonizing Russia & gender), it may be that society is under a magic spell, which I equate with Satanic possession.” – Henry Makow

* Francis is a Voodoo adept who describes the true esoteric character of Judaism.*

“Any ritual practice is considered as valuable [if]  it is materially efficient. It is a practice of magic, not of faith. Most of the Talmud … is about the magical power (that is suppose to translate into general economic prosperity.) You may win or lose by obeying such or such rule or performing such or such ritual, such as for instance the power of objects such as mezuzah and other like amulets.”
Francis | henrymakow.com Judaism is NOT a religion : what holds it together is a system of witchcraft, of magic.  The Talmud is a Grimoire,  a book of magic spells and invocations, secrets and recipes to be interpreted by the means of strenuous symbolic decoding for the acquisition of various occult powers over things and people, not as book about moral values to apply in view of salvation.

Judaism acknowledges it must be grouped with other magical systems, such as Indian tantrism, such as Sufism, such as [Aleister] Crowley’s [system], who in return practiced more Jewish rituals than all Jews together, and with a far better understanding of them than is generally taught by Jews proper.

The Jews of power in the world have always considered that magicians and sorcerers are the only real transmitters of influence between them and the non-Jewish world. The synagogues were traditionally responsible for the teaching and training of future witches and magicians and astrologers in the Western Christian countries, a state of things that still goes on in certain countries such as Haiti.

They have nothing but contempt not only for all religions proper but also even more to their own co-religionists who still cling to Judaism as to a mere system of moral rules, and vie to apply them in their life as is taught to children. These people are despised in Israel under the name of « freier ». [Yidish for sucker.]  If your practice of Judaism doesn’t give the power to make money or succeed in some way, you just don’t get it…

Most enlightenment Jews who pride themselves on being emancipated from superstition…are the first to fall for the trap where most Christian fall mistaking the Jewish religion for a more primitive, bizarre and ethnocentric moral system like Christianity.  Superstition is what Talmudic magic is all about, the only thing is that you have to make sure your superstition works and your enemy’s does not is by encouraging him to adopt into false ones, preferably of your own making.

Never fall for antisemitism, which is yet another ideology, another Jewish-made superstition for non-Jews : when you do real magic, there is just no greater guarantee of power coming constantly to your person than being hated by all while being capable of escaping the psychological and judicial negative consequences of such hate.

For instance Aleister Crowley strove to pass as a very dangerous person doing way more ritual crimes more than he did actually (even though he did quite a few but only where he could not be sued for them and legally caught as in India or in Sicily).

What I require from Jews is to present themselves as possessors of occult power through maternal inheritance or through initiation (conversion is a very improper term for Judaism : you undergo an initiatic trial as in masonry, which is something very different, with a surrogate mother trying thrice to discourage you from becoming a Jew, as was the case for the initiates of ancient Egypt), and to present their thing as a pure system of magic, as a school of magic as they themselves define it (hence the word synagogue which means school) never as a faith group, exactly as is done with Indian tantrism or Japanese combat mysticism.

You don’t consider a school of aikido to be a religious institution (even though many practitioners of aikido are rabid Japanese racists and religious fanatics capable of terrorism and economic crimes against those they deem sub-human), there is no reason to consider Judaism on another standing.

And you would get thereby respect from Jews, both honest and dishonest.  Whenever you embark into any organized ideology that is not to be appreciated for the magical rituals you learn to perform to get elevated in this world in some way … you forfeit your status for those people. Your sole utility is to serve Jews as remotely controlled robots; that is the way they think.

So if you mistake them as a religion to be potentially included into some kind of interfaith dialogue, you are just asking to be their victims. You don’t get any respect nor from the dishonest Jews who rule all community things nor from the honest ones who, like you are yourself, do their thing alone.
—
NOTES-

1. Most of the TALMUD (99%) is a grimoire pure and simple (objects acquire very definite magical power when properly handled and lose it when defiled, and that magical power — parnassa it is called — brings about very definite material advantages particular to each rule obeyed), but once you have learned through the Talmud to think that way, you are supposed, that is very important to remind oneself, to read the Biblical verses too as magical precepts of the very same kind and of even higher order in secret form : the Sod.  There are four levels of interpretation : merely material (patah) where very straightforward and quite sordid stories are considered to have happened once, symbolical where the same story is considered to be a particular case of a more general that recurs again and again in Jewish existence, moral where an injunction is to be understood as regards that story, and secret (Sod) where you are supposed to understand what power to do what obeying to that injunction will bring you.  And once you understand the Sod the only form of speech you are entitled to express it through so as to impart it, is money, your ability to turn the situation described into money : as long as you are still engrossed in your own mental discoveries of the various possible secret meanings of the verse, you haven’t got it.  When you get it you stop talking, you make it. So, when they read the Torah they read it as a secret book of magical formulae : there is no possible dialogue with Christians, any more than between people who discuss art on the point of view of self-expression of your soul and other people who discuss art on the point of view of influencing the souls of the general public through symbols.

2.Contrary to what is often said, they do believe in an after-life though, but in an after-life that is not a judgement in the Christian sense but a continuation of the present one as for its moral aspect, where the cunning that had not all the time to succeed in the schemes they had been working on will be able to resume them each according to his acquired talent as per the laws of karma and as regards Kabbalah, reincarnation as well).  I do not mean it as an insult : the most honest believing Jews I know love their thing that way, as the best and most interesting of all schemes of occult science, and to tell you the truth, as long as you do your best to stay a human being and don’t get too engrossed in your own powers so as to abuse of others while doing or exploring magic, I say “why not? »