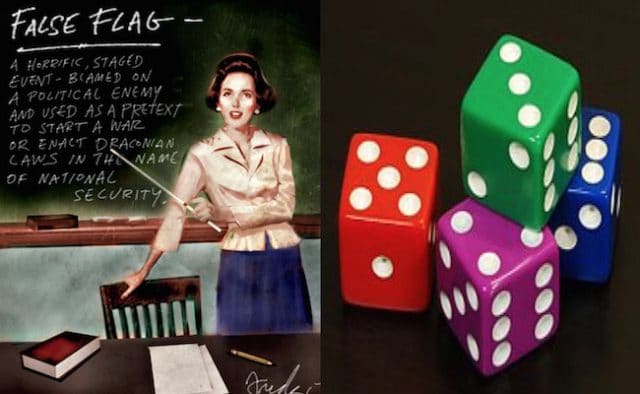 Public attention continues to be on the recent Las Vegas event. An event being a “false flag” does not mean that there were no fatalities but they are typically misreported with the story constantly changing. Many, including myself, are scrutinizing this event and its agenda. Following are some excerpts from two Veterans Today articles.

What are the odds? That is the question we keep asking ourselves after each suspected false flag.

What are the odds that every “radical Islamic terrorist” is going to drop a passport or ID card? (See Michel Chossudovsky’s article Barcelona, Manchester, Berlin, Paris, Nice, London, New York: Passports and IDs Mysteriously Discovered in the Wake of Terror Attacks.)  What are the odds that the same Mossad-linked photographer will just happen to show up to film and publicize two terror attacks in less than a week? What are the odds that…? I could go on and on, and often do, but you get the idea.

“The Las Vegas shooting, like so many “ISIS-related events,” also seems, at first glance, to defy the odds.”

“…but at 11:20 pm, police were heard blasting the door off the room where gunman Stephen Paddock was found dead, according to Las Vegas Law enforcement.”

Sheriff Joe Lombardo has said that suspect Stephen Paddock killed himself prior to police entering his 32nd floor hotel room.

The suspected shooter has been killed by police, this is in keeping with all other mass shootings in the US in recent times and is #6 on the checklist.

This event happened only a couple of hours ago and it is too soon to make any pronouncements; however, as always with any mass shooting event it is prudent to remember the False Flag Checklist and remain vigilant for any suspicious aspects:

1: Drill at the Same or Nearby Time and Place
2: Foreknowledge
3: Eyewitnesses Have Conflicting Accounts
4: MSM Quickly Name and Demonize the Patsy
5: Patsy Has No Military Training, Yet Shoots Extremely Fast and Accurately
6: Patsy Gets Killed, Drugged or “Suicided”
7. Driver’s Licence or Passport of shooter(s) conveniently found at scene
8: Shooter Leaves Manifesto
9: Evidence Gets Conveniently Destroyed
10: No Obvious Motive for the Mass Attack
11: Immediate Calls for Gun Control
12: Fake “Victims” = Crisis Actors
13: “Victims” Get Killed Twice
14: Families of “Victims” Have Elite or Acting Backgrounds.
15: Families of “Victims” Show Little to No Emotion, and Even Snigger and Laugh
16: Families of “Victims” Receive Millions in Federal Payoffs

This advert for Crisis Actors in the Las Vegas area appeared on Craigslist in mid August, see #12 on the checklist. Crowds On Demand is the same company that had ads up in Orlando before the Pulse nightclub shooting, as well as ads before the Boston Marathon Bombing and the Charlottesville Riots earlier this year; they also provided fake Trump supporters for political rallies during last years election.

What are the odds Las Vegas shooting was a false flag? UPDATED

However, these do not look like fake victims, sadly:

We will, of course, be watching subsequent events and media reporting of this incident with a very cynical and suspicious eye.

…I hate to jump to conclusions. But given what we know about Operations Gladio and Gladio B, the above-noted issues do suggest the likelihood of this being another false flag event. 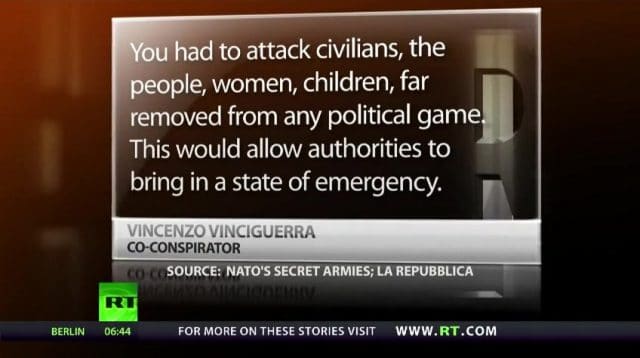 The free-floating anxiety generated by an event like the Las Vegas shooting can be turned against North Korea, Iran, Russia, or China. It can be used to push gun control. It can be used to keep the whole post-9/11 Orwellian dystopia going and growing. It can and will be used to bludgeon citizens into continuing to surrender their rights.

…Robert David Steele just sent me a screen shot of messages exchanged on the evening of September 10th, predicting a mass shooting false flag in Las Vegas the next day, i.e. the 9/11 anniversary.  Here is his message followed by the screenshot. -KB 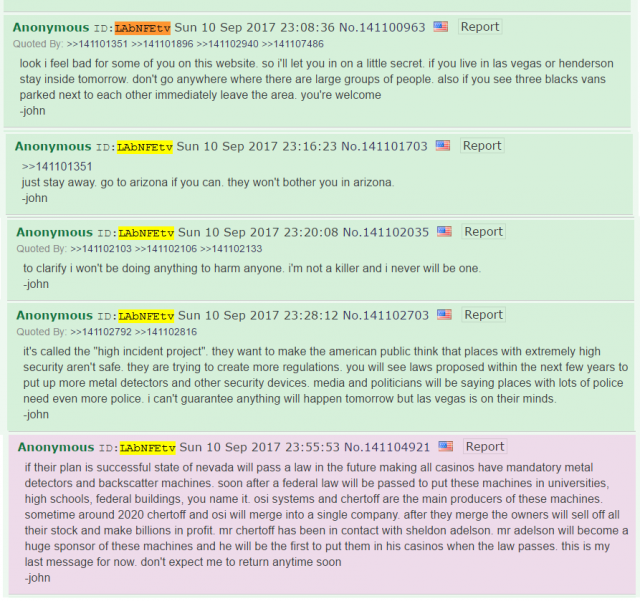 This observation (that I think is spot-on) appeared on another Youtube vid (by Youtuber FaceLikeTheSun):

“There are definitely two new world orders; the one we see now is a “counterfeit” for lack of a better word. It is being disclosed as the Externalization of the Hierarchy right now. The real NWO is behind the scenes and their agenda can be found in the writings of The Protocols of the Elders of Zion, The Babylonian Talmud, the Kabbalah, and The Jewish Utopia by Michael Higger (the Jewish Utopia is especially chilling. They will remain out of sight, causing all the different racial, political and religious factions to war against each other until no one is left standing but them. It is a very clever long-term luciferian plan, i.e. Lucifer, the god of this world and the god of the apostate Zionists. After deconstructing the existing system they will then step in with all of the answers to the chaos, specifically with their “despot king.” Bible prophecy, most of which has already been fulfilled in Jesus Christ (see Luke 24) is being made to appear as though it is being fulfilled now in an “Armageddon Script.” Stay in the Word of God, pray for discernment and pray for others.

This is only Two Quotes from The Jewish Utopia by Michael Higger.

“To understand the rabbinic conception of an ideal world it will help us if we imagine a hand passing from land to land, from country to country, from the Persian Gulf to the Atlantic Ocean, and from the Indian Ocean to the North Pole, marking “righteous” or “wicked” on the forehead of each one of the sixteen million inhabitants of our earthly globe. We should then be on the right road toward solving the major problems that burden so heavily the shoulders of suffering humanity. For mankind should be divided into two, and only two distinct and unmistakable groups, namely, righteous and wicked.”

“Israel, the ideal, righteous people, will thus become spiritually the masters of the world…only those who are convinced of Israel’s divine purpose in the world, will be welcome to join Israel in the upbuilding of an ideally spiritual life on earth…the new social order of the Universal State…with the advent of the Messiah, who will usher in the ideal era, all the national ensigns and laws, which are barriers to genuine international peace, brotherhood, and the happiness of mankind, will gradually disappear. On the Messianic flag, the symbol of knowledge, peace, tranquility of the individual mind, will remain, and all the nations will center round that emblem…All will recognize one flag or standard, bearing the name of God…The world will, therefore, unite in praising the Lord for Israel’s universalism…Jerusalem will become the ideal capital of the new Universal State.”

The following excerpt is taken from Alice Bailey’s “Externalitzation of the Hierarchy”: 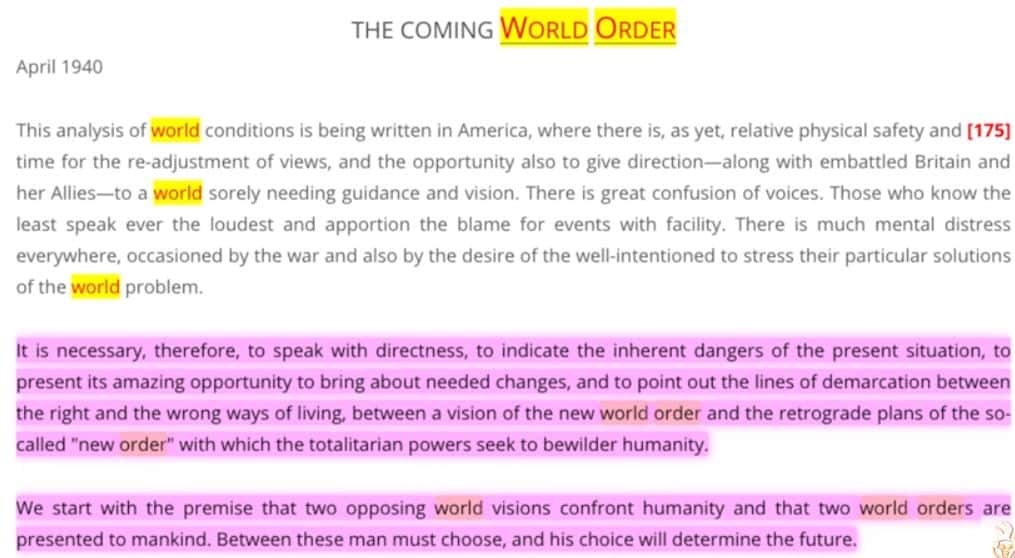