Some influential evangelical leaders are lobbying for an attack on Iran.

But it’s not about geopolitics — it’s about bringing about the End Times.

In a perfect world, a reporter at last week’s press conference with George Bush and Tony Blair would have asked Bush, in the presence of his principal European ally, if he believes the European Union is the Antichrist.

Although it sounds like the kind of Pat Robertson lunacy that makes even the wingnuts run for the nearest exit, it’s a question Bush should be forced to answer. Bush and other leading Republicans have lined up behind a growing movement of Christian Zionists for whom a European Antichrist figures prominently in an end-times scenario. So they should be forced to explain to the rest of us why they’re courting the votes of people who believe our allies are evil incarnate. Could it be that the central requirement for their breathlessly anticipated Armageddon — that the United States confront Iran — happens to dovetail so nicely with the neoconservative war agenda?

At the center of it all is Pastor John Hagee, a popular televangelist who leads the 18,000-member Cornerstone Church in San Antonio, Texas. While Hagee has long prophesized about the end times, he ratcheted up his rhetoric this year with the publication of his book, “Jerusalem Countdown,” in which he argues that a confrontation with Iran is a necessary precondition for Armageddon and the Second Coming of Christ. In the best-selling book, Hagee insists that the United States must join Israel in a preemptive military strike against Iran to fulfill God’s plan for both Israel and the West. Shortly after the book’s publication, he launched Christians United for Israel (CUFI), which, as the Christian version of the powerful American Israel Public Affairs Committee, he said would cause “a political earthquake.”

At CUFI’s kick-off banquet at the Washington Hilton, attended by over 3,500 members, Republican support for both Hagee’s effort and his drumbeat for war with Iran were on full view. Republican National Committee Chair Ken Mehlman told the group that “no regime is more central to the global jihad” than Iran. Just two days before, Newt Gingrich and John McCain made the rounds of the Sunday talk shows to sound the same message, leading Benny Elon, a member of the Israeli Knesset, to comment to the Jerusalem Post that their remarks originated with Hagee. Rick Santorum and Sam Brownback also addressed the group, and Bush sent words of support to the gathering. Republicans, and even some Democrats, spoke at CUFI events to show their “support for Israel.” But while public and media attention was on the fighting between Israel and Hezbollah, Hagee’s focus continued to be on Iran.

While the crisis at the Israel-Lebanon border drew more mainstream media attention to CUFI’s activities, Hagee’s supporters have long known that leading Republicans are listening. Rabbi Daniel Lapin, a prominent Jewish ally of the evangelical right (and friend of Jack Abramoff) has said that Hagee “without question, yes, absolutely” has the ear of the White House. Hagee’s annual Night to Honor Israel at his church has drawn prominent Republicans, including Tom DeLay, who was the keynote speaker in 2002.

Although Republicans would never admit it — they claim their support for Christian Zionists like Hagee is based on their own support for Israel — it is clear that they know they need the votes of this constituency to win. In the same way that Karl Rove courted conservative evangelicals in 2004 by appealing to their homophobia, Republican campaign rhetoric for 2006 and 2008 has already shown signs of playing to voters who have been hearing hype for a war with Iran for months — at church.

While Washington insiders wonder what it means when Republicans like Mehlman and presidential aspirants Gingrich and McCain finger Iran as the central player in an epic clash of civilizations, Hagee already has spent months mobilizing the shock troops in support of another war. As diplomats, experts and pundits debate how many years Iran will need to develop a viable nuclear weapon, Hagee says the mullahs already possess the means to destroy Israel and America. And although Bush insists that diplomatic options are still on the table, Hagee has dismissed pussyfooting diplomacy and primed his followers for a conflagration. 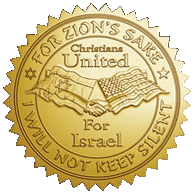 Hagee wields “a very large megaphone” that reaches “a very large group of people,” said Rabbi James Rudin of the American Jewish Committee, who has studied the Christian right for 30 years. With CUFI, the pastor has exponentially expanded the reach of his megaphone beyond his television audience. Thanks to the viral marketing made possible by the hundreds of evangelical leaders who have signed on to his new organization, his warmongering has rippled through megachurches across America for months. Hagee calls pastors “the spiritual generals of America,” an appropriate phrase given his reliance on them to rally their troops behind his message.

The CUFI board of directors includes the Rev. Jerry Falwell, former Republican presidential candidate and religious right activist Gary Bauer, and George Morrison, pastor of the 8,000-member Faith Bible Chapel in Arvada, Colo., and chairman of the board of Promise Keepers. Rod Parsley, the Ohio televangelist who is rapidly becoming a major political player in the Christian right, signed on to be a regional director.

For Hagee’s new project, his influence in Washington is probably less important than his influence over his audience. With the clout of his listeners, he can serve Bush administration hawks by firing up grassroots support for a military strike against Iran. Over 700,000 people purchased his book, “Jerusalem Countdown,” and countless more have heard him promote it on Christian radio and television programming. Dramatic, doomsday advertising has been heard by listeners of Christian media as well as on Sean Hannity and Bill O’Reilly’s radio programs. The pages of “Jerusalem Countdown” provide a peculiar mix of biblical prophecy, purported inside information from Israeli government officials and a mixed-up, pared-down lesson in nuclear physics.

“I wrote this book in April 2005, and when people read it, they will think I wrote it late last night after the FOX News report,” says the author without a trace of irony. “It’s that close to where we are and beyond.”

Hagee speaks simultaneously to two audiences about Iran’s nuclear capabilities: one that fears a terrorist attack by Iran and another that embraces a biblically mandated apocalypse. To impress the fearful, he mimics Bush’s deceptions about Iraq’s capacity to attack the United States with weapons of mass destruction, Condoleezza Rice’s warnings of mushroom clouds, and Dick Cheney’s dissembling about an alliance between Saddam Hussein and al-Qaida. Comparing Iranian President Mahmoud Ahmadinejad to Hitler, Hagee argues that Iran’s development of nuclear weapons must be stopped to protect America and Israel from a nuclear attack. Preying on legitimate worries about terrorism, and invoking 9/11, he vividly describes a supposed Iranian-led plan to simultaneously explode nuclear suitcase bombs in seven American cities, or to use an electromagnetic pulse device to create “an American Hiroshima.”

When addressing audiences receptive to Scriptural prophecy, however, Hagee welcomes the coming confrontation. He argues that a strike against Iran will cause Arab nations to unite under Russia’s leadership, as outlined in chapters 38 and 39 of the Book of Ezekiel, leading to an “inferno [that] will explode across the Middle East, plunging the world toward Armageddon.” In Hagee’s telling, Israel has no choice but to strike at Iran’s nuclear facilities, with or without America’s help. The strike will provoke Russia — which wants Persian Gulf oil — to lead an army of Arab nations against Israel. Then God will wipe out all but one-sixth of the Russian-led army, as the world watches “with shock and awe,” he says, lending either a divine quality to the Bush administration phrase or a Bush-like quality to God’s wrath.

But Hagee doesn’t stop there. He adds that Ezekiel predicts fire “upon those who live in security in the coastlands.” From this sentence, he concludes that there will be judgment upon all who stood by while the Russian-led force invaded Israel, and issues a stark warning to the United States to intervene: “Could it be that America, who refuses to defend Israel from the Russian invasion, will experience nuclear warfare on our east and west coasts?” He says yes, citing Genesis 12:3, in which God said to Israel: “I will bless those who bless you, and I will curse him who curses you.”

To fill the power vacuum left by God’s decimation of the Russian army, the Antichrist — the head of the EU — will rule “a one-world government, a one-world currency and a one-world religion” for three and a half years. (Hagee adds that “one need only be a casual observer of current events to see that all three of these things are coming into reality.” The “demonic world leader” will then be confronted by a false prophet, identified by Hagee as China, at Armageddon, the Mount of Megiddo in Israel. As they prepare for the final battle, Jesus will return on a white horse and cast both villains — and presumably any nonbelievers — into a “lake of fire burning with brimstone,” thus marking the beginning of his millennial reign.

Hagee doesn’t fear a nuclear conflagration, but rather God’s wrath for standing by as Iran executes its supposed plot to destroy Israel. A nuclear confrontation between America and Iran, which he says is foretold in the Book of Jeremiah, will not lead to the end of the world, but rather to God’s renewal of the Garden of Eden. But Hagee is ultimately less concerned with the fate of Israel or the Jews than with a theocratic Christian right agenda. When Jesus returns for his millennial reign, he tells his television audience, “the righteous are going to rule the nations of the earth When Jesus Christ comes back, he’s not going to ask the ACLU if it’s all right to pray, he’s not going to ask the churches if they can ordain pedophile bishops and priests, he’s not going to ask if it’s all right to put the Ten Commandments in the statehouses. He’s not going to endorse abortion, he’s going to run the world by the word of God The world will never end. It’s going to become a Garden of Eden, and Christ is going to rule it.”