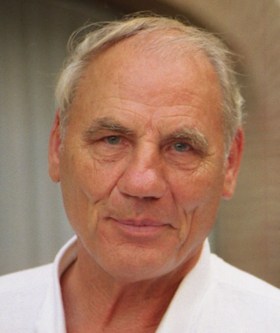 Dr. Ryke Geerd Hamer,discovered that not only cancer but all diseases are triggered by unexpected shocks and traumas. Thugs showed up and threatened that if he didn’t disown his findings, things would become unpleasant.

Reading this brings to mind the onslaught of Fear, shock, and trauma that society is being subjected to through Armageddon-themed films and television series, “terrorist” false flag events, as well as fear-based “End Times Prophecy” teachers. God has always told us not to walk in fear. If a news or radio show or a Youtube video is causing you to fear, check your source and their message (is it in line with how scripture would approach the subject?) Better yet, just shut it off. And check yourself; remember who’s you are. Maybe spend some time in the Word instead.

“Thou wilt keep him in perfect peace, whose mind is stayed on thee: because he trusteth in thee.” Isaiah 26:3

In 1978, Dr. Hamer’s son Dirk was mortally wounded in a shooting accident, shot by the crown prince of Italy. Dirk died 4 months later.

Six months later Dr. Hamer was diagnosed with testicular cancer. He had the cancer surgically removed.

Since Dr. Hamer never had been seriously ill, he wondered if the sudden shock of his son’s accident may have triggered his cancer. While working in a large cancer clinic, he visited the ward with testicular cancer patients and began asking them questions. He noted that, prior to the diagnosis, every patient has had a serious conflict, or loss of a loved one.

He visited the ovarian cancer ward and the patients also had lost a dear loved one prior to diagnosis. He learned in the university that the testicles and ovaries were of the same embryonic origins.

Dr. Hamer then noted on brain CT scans that every testicular and ovarian cancer patient had a dark spot in the same location.  He concluded that not only cancers but all disease is triggered by unexpected shocks and traumas. Later he came to the conclusion that various related smaller emotional triggers can accumulate over years or even decades to manifest as disease.

In 1981, he submitted his findings in a post doctoral thesis at the University at Tubingen, Germany.  Within days, a couple of thugs showed up at his home. They threatened that if he didn’t disown his findings things would become unpleasant.  Dr. Hamer refused. He had made a momentous discovery and had rigorously proved it.

Meanwhile Dr. Hamer and his wife were the target of constant harassment from the the powerful Italian Savoy family who were responsible for their son’s death. Dr Hamer believes that this constant persecution eventually caused the death of his wife in 1985.

A few months later the University of Tubingen rejected his thesis without any testing or serious review.

They refused to accept the link between the psyche and disease.  Years later, the court ordered the university to test Hamer’s findings. Despite this the university has never complied.

In 1986, court action was sought against Dr. Hamer for refusing to deny his discoveries. The court took away his license to practice medicine, told him to get another line of work and warned him not to speak to any cancer patients.

Nevertheless, he operated an underfunded cancer clinic and was having phenomenal success with a 92% cure rate in well over 20,000 cases.  Dr. Hamer maintains that modern cancer treatments are cruel, barbarous and unnecessary. He says that if he knew the truth back when he had his testicular cancer, he would never have asked for its surgical removal.

The persecutions became so intense that he fled to Spain, where he practiced.  Eventually he was arrested and falsely imprisoned. France extradited him for further persecution and imprisoned him for a further three years on ridiculous falsified charges.

Upon release, he befriended a French oncologist Dr. Claude Sabbah and trained him in what is called New German Medicine (NGM). Dr. Sabbah quickly learned NGM and was having the same success as Dr. Hamer. Dr. Sabbah in turn taught as many more physicians who were receptive.

Many Jewish MDs were helping their Jewish clients with NGM. However, they continued to use the dangerous and practically useless modern therapies on their goy clients.   Dr. Hamer protested this hypocrisy.  This is why the Jewish community labels him as an anti-semite.

Dr. Hamer has received official apologies from a number of Rabbis for the smear. However the stain remains on the many Illuminati sponsored websites that disparage and denigrate Dr. Hamer.

Various individuals and groups are plagiarizing  Dr. Hamer’s  discoveries and failing to give him credit.  There are even some Christian groups that bend and twist his work to fit Biblical scripture.  From reports I have seen, they cause as much harm as good.  This is  because they haven’t taken a single day of study to get a clear understanding.

The Illuminati’s industrial medical complex have tried their best to cover up Hamer’s findings.  But with the openness of the Internet, they have been unable to stop the tide.

“Thanks to Dr. Ryke Geerd Hamer for his extraordinary discoveries. They will change the way we conceive of illness.  If we lived in a just world, Dr Hamer should have been awarded the Nobel Prize in Medicine for his revolutionary work!” – Gilbert Renaud  Ph. D

Instead of the Nobel Prize, he has done prison time. He has fled from nation to nation to avoid the unrelenting harassment and persecution of the industrial medical complex.  Dr. Hamer has sacrificed leisure and comfort  to bring the truth to the world.

Today Dr. Hamer resides in an undisclosed location in a nation that has no extradition treaty with Germany.

Stephen Coleman, 54, is an alternative therapist in California