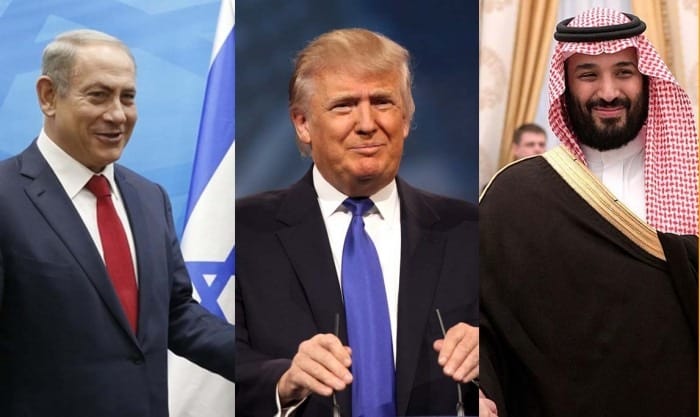 Yesterday we saw that something is off about the bombing of the Saudi Arabian oil fields, but even Trump haters don’t seem interested in hearing about it. I hope you watched Many Fishes video pointing out the inconsistencies in the official narrative. Here Chuck Baldwin offers some needed perspective.

Ever since Donald Trump took office, he has done everything he could do to enable, empower, enrich, exalt, enhance, enlarge, extol and excuse the two biggest terror states in the world:  Israel and Saudi Arabia.

He has provided hundreds of billions of dollars’ worth of foreign aid and military hardware and munitions to both Saudi Arabia and Israel.

He has defended and assisted Israeli Prime Minister Benjamin Netanyahu’s genocides—and acts of persecution—against virtually the entire Palestinian population. To give you some perspective, Netanyahu and his Zionist predecessors have murdered over 5 million Palestinians. And they could not have accomplished this horrific Palestinian holocaust without America’s—including Donald Trump’s—help.

He has defended Saudi King Salman bin Abdulaziz Al Saud and his son Mohammad bin Salman Al Saud’s murder of journalist Jamal Khashoggi. He has defended and ASSISTED these Wahhabi wackos as they have murdered 56,000 people by bombs and small arms fire (supplied by the United States, of course); 2,500 civilians have died from cholera; and over three million innocent people have been displaced. Trump’s assistance of Saudi Arabia’s brutal and unconscionable war has created the greatest humanitarian crisis in the 21st century, with 10 million innocent Yemeni people slowly starving to death as we speak. With Trump’s help, the House of Saud has already killed over 85,000 children under 5 years of age in Yemen.

But, then again, as long as tyrants stay on Donald Trump’s smiley side, there is hardly one that Trump doesn’t like—no matter how bloodthirsty they are. Of course, we all heard Trump say that Egyptian President Abdel Fattah Sisi is his “favorite dictator.”

Abdel Fattah Sisi is one of the most cruel, bloodthirsty men in the world. His torture and acts of barbarism against the Egyptian people who run afoul of his ruthless regime are so horrific that it is difficult for ordinary people to even comprehend. But Donald Trump loves him and calls him his “favorite.”

I agree with Joe Walsh that Donald Trump is a would-be dictator. I am absolutely convinced that Trump has the heart of a stone-cold, ruthless, vengeful tyrant. He loves power in the way that any barbarous, bloodthirsty butcher you’ve ever read about loves power.

Trump has used the U.S. military to carry out bombing raids, drone attacks and ground troop operations on behalf of these two foreign countries, especially Israel. For all intents and purposes, the U.S. military is little more than a proxy army for Israel.

And now after Saudi oil fields were attacked by drones, Donald Trump said he is waiting on his “Saudi masters” (Tulsi Gabbard’s words—and good ones) to tell him “under what terms we should proceed.”

What business is it of ours to fight Saudi Arabia and Israel’s wars? Since when does the President of The United States take his marching orders from foreign countries? I’ll tell you since when. Since at least 1967, when President Lyndon Johnson assisted Israel’s attack against the USS LIBERTY and then helped Israel cover it up.

If you don’t believe that the United States is a puppet state for Israel, watch this video of Benjamin Netanyahu privately bragging about it. Notice that he also mocks the stupidity of the American people (which goes triple for America’s Christian people) for being so easily duped and manipulated by Israel.

Trump acknowledged that we don’t even need Saudi oil. So, pray tell, why does Trump need instructions from Saudi Arabia? It’s because Trump is not his own man. He was never his own man. All of his bellicose rhetoric is nothing more than theatrics to make people believe he is his own man. He’s not. He wasn’t even his own man when he was in private business. He was owned lock, stock and barrel by Zionists. And he still is. Who do you think bailed him out of SEVEN bankruptcies?

Donald Trump doesn’t work for America. He works for foreign interests, just like every president since at least GHW Bush. But no U.S. president has ever groveled before the terrorist states of Saudi Arabia and Israel the way Trump grovels before them.

Donald Trump is the biggest bootlicker to ever sleep in the second-floor bedroom of the White House (which is actually the third floor above ground) since…well, since it was built.

Gabbard nailed it when she said, “The U.S. is not Saudi Arabia’s b**ch.” But under Donald Trump, that’s exactly what America is. And Israel’s.

Democratic presidential hopeful Tulsi Gabbard has doubled down on her attacks on President Donald Trump’s ‘disgraceful’ allegiance to Saudi Arabia, eviscerating his ‘betrayal’ of her fellow soldiers and the US Constitution.

Singling out Trump’s statement that the US was “locked and loaded” but “waiting to hear from the Kingdom … under what terms we would proceed,” Gabbard slammed the US president for “offering to place our military assets under the command of a foreign country.”

Gabbard called out the “betrayal of my brothers and sisters in uniform, the American people, and the Constitution” in a video posted to Twitter on Monday, reminding her Commander-in-Chief that she and her fellow soldiers took an oath to defend the Constitution – which doesn’t allow the president to offer up the country’s military on a silver platter to any foreign nation willing to pay for the privilege.

“We are not your prostitutes. You are not our pimp,” she said.

Donald Trump is not making America great. He is making Israel and Saudi Arabia great. But this is just one more of Trump’s perversions of constitutional government that Christians and conservatives will choose to ignore.

P.S. My recent message, The Destruction of Jerusalem, just might be the most powerful message God has ever given me to preach in my 44+ years of pulpit ministry.

The great truths that God taught through this seismic event are all but lost to today’s Christians. The lack of knowledge and understanding about the destruction of Jerusalem is a sign of the great “falling away” that has taken place in the Church over the past one hundred years. It is also a major cause of the vast misinterpretation of prophetic Scriptures relating to Israel.

Furthermore, the loss of these great truths contributes massively to the false doctrines of Christian Zionism being taught by the vast majority of evangelical churches today. Plus, it is no hyperbole to say that the false doctrines of Christian Zionism are directly responsible for the perpetual wars that are being carried out by the U.S. military on behalf of Israel.

The repudiation of the lessons taught in the destruction of Jerusalem has led to the deaths of multiplied millions of people all over the world and the perversion of the historic Christian faith that had been faithfully taught for 1800 years.

I say this from the bottom of my heart: If you only watch ONE of my messages, it should be THIS ONE.

Many people are requesting multiple copies of this message to give to friends, so we have a special bulk discount price available for this message.

Find my message, The Destruction Of Jerusalem, here.