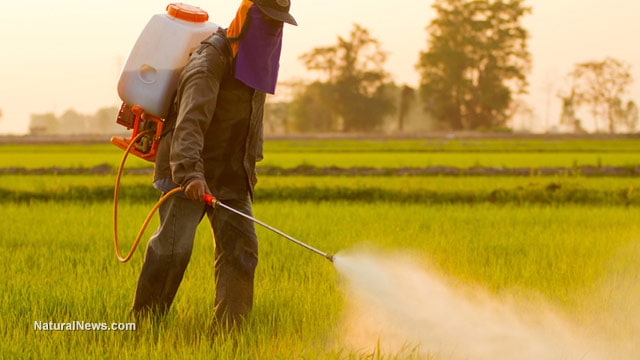 (NaturalNews) (Story by Arjun Walia, republished from Collective-Evolution.com, with additional editing by Natural News.) “Children today are sicker than they were a generation ago. From childhood cancers to autism, birth defects and asthma, a wide range of childhood diseases and disorders are on the rise. Our assessment of the latest science leaves little room for doubt; pesticides are one key driver of this sobering trend.” October 2012 report by Pesticide Action Network North America (PANNA)[1][2]

“If it is an environmental cause that’s contributing to an increase, we certainty want to find it.” – Craig Newschaffer, an epidemiologist at Drexel University in Philadelphia, Pennsylvania[4]

Research continues to surface indicating that autism goes far beyond just genetics. It’s showing us that we might have to look at multiple factors (like environmental toxins, prescription drugs, etc) when trying to figure out what’s going on, and why autism rates continue to climb exponentially.

“It’s time to start looking for the environmental culprits responsible for the remarkable increase in the rate of autism in California.” – Irva Hertz-Picciotto, epidemiology professor at University of California, David[5]

A sufficient amount of evidence is now pointing to the fact that agricultural pesticides (among various other environmental toxins) might play a large role in the rapid increase in autism rates over the past few decades. A senior researcher from The Massachusetts Institute of Technology (MIT), Dr. Stephanie Seneff is doing her part to create more awareness of these facts that have yet to make big news in the world of mainstream medicine.

At a recent event sponsored by the holistic-focused Groton Wellness Organization, she stated that:

Seneff presented slides showing a remarkably consistent correlation between the rising use of Monsanto’s Roundup herbicide(with its active ingredient glyphosate) on crops and the rising rates of autism; it definitely gives researchers plenty to think about, especially considering her research into the side effects of autism mimic glyphosate toxicity and deficiencies.

Although the graph depicts a staggering correlation, it does not “prove” that the rise in autism is directly a cause of glyphosate. On the other hand, we have a lot of information and research available that suggests it could be one factor (out of many) and Dr. Seneff argues that it is. Pesticides have been linked to a number of human health ailments from Parkinson’s, to Alzheimer’s, to cancer and autism. You can access some of those studies (out of many) here.[7]

Dr. Seneff, through her research, also believes that aluminum containing vaccines may also be a culprit. You can read more about that, and access that research here.[8]

The Toxicity of Glyphosate and Autism

In the lecture Dr. Seneff gave, she pointed to the fact that Monsanto commonly argues that glyphosate is not toxic (despite numerous studies showing how toxic it is) because our cells don’t have what is called the “shikimate”[9] pathway. What’s important to note however, is that our guts do indeed have this pathway and we depend on it to supply us with essential amino acids (among other things). Gut health is of utmost importance to overall health, so this is quite disturbing. Seneff also points to the fact that there are other ingredients within glyphosate that greatly increases its toxic effects.

It makes one wonder doesn’t it? How could a corporation like Monsanto (a corporation charged with regulating our global food supply) claim that glyphosate is safe despite all of the evidence that confirms that it’s not?

“It is commonly believed that Roundup is among the safest pesticides… Despite its reputation, Roundup was by far the most toxic among the herbicides and insecticides tested. This inconsistency between scientific fact and industrial claim may be attributed to huge economic interests, which have been found to falsify health risk assessments and delay health policy decisions.” – R. Mesnage et al., Biomed Research International, Volume 2014 (2014) article ID 179691

It’s even been found in the breast milk of mothers, and in urine samples of people across Europe.[11]

The main toxic effects of glyphosate identified by Dr. Seneff are as follows:

Pesticide formulations that are sold and used are up to 1000 times more toxic than what regulators commonly claim. Roundup is in fact the most toxic of herbicides and insecticides used. There is a tremendous amount of evidence that also point to flawed safety evaluations. You can read more about that here.[12]

“Adjuvants in pesticides are generally declared as inerts and for this reason they are not tested in long-term regulatory experiments. It is thus very surprising that they amplify up to 1000 times the toxicity of their Active Principles in 100 % of the cases where they are indicated to be present by the manufacturer.” – R. Mesnage et al., Biomed Research International, Volume 2014 (2014) article ID 179691

Seneff notes a number of well known “bio-markers of autism.” These include low serum sulfate, disrupted gut bacteria, inflammatory bowel, serotonin and melatonin deficiency, mitochondrial disorder, zinc and iron deficiency and more. She also points to the fact that:

“These can all be explained as potential effects of glyphosate on biological systems.”

Dr. Seneff goes into much greater detail, and to access that science, see source [13]. To access most of her recent research of these topics, see source [14]. To view her entire lecture, you can click source [15].

“The change in how agriculture is produced has brought, frankly, a change in the profile of diseases. We’ve gone from a pretty healthy population to one with a high rate of cancer, birth defects and illnesses seldom seen before. The tobacco companies denied the link between smoking and cancer, and took decades to recognize the truth. The biotech and agrochemical corporations are the same as the tobacco industry; they lie and favor business over the health of the population.” – Dr. Medardo Avila Vazquez, a pediatrician specializing in environmental health[16][17][18] (Related CE Article on the GMO/Cancer link in Argentina here)[19]

There is a tremendous amount of recent research being conducted that has looked into the role of environmental toxins (agricultural pesticides are one of them) in autism.

For example, A study coming out of the University of California Davis, determined that pregnant women who live in close proximity to land and farms where chemical pesticides are/were applied experience a two-thirds increased risk of having a child with autism spectrum disorder or some other developmental disorder.

“This study validates the results of earlier research that had reported associations between having a child with autism and prenatal exposure to agricultural chemicals in California. While we still must investigate whether certain sub-groups are more vulnerable to exposures to these compounds than others, the message is very clear: Women who are pregnant should take special care to avoid contact with agricultural chemicals whenever possible.” – Janie F. Shelton, a UC Davis graduate student who now consults with the United Nations, lead author of the study.[20]

You can read more about that at source [21].

A new study published in the journal PLOS Computational Biology, from researchers at the University of Chicago revealed that autism and intellectual disability (ID) rates are linked with exposure to harmful environmental factors during congenital development.[22]

In another case, a group of scientists put together a comprehensive review of existing data that shows how European regulators have known that Monsanto’s glyphosate causes a number of birth and brain malformations since at least 2002. Regulators misled the public about glyphosate’s safety, and in Germany the Federal Office for Consumer Protection and Food Safety told the European Commission that there was no evidence to suggest that glyphosate causes birth defects.[23] In fact there is plenty of research confirming that mothers who are exposed to commonly used, “safe” pesticides give birth to children with lower intelligence, structural brain abnormalities, behavioural disorders, compromised motor skills, higher rates of brain cancer and small head size. You can read more about that here.[24]

The list goes on and on, and you can access more studies that are a cause for concern at source [25].

“What’s appalling is that we have known about these dangers for decades yet have done little about it. Nearly 20 years ago, scientists at the National Research Council called for swift action to protect young and growing bodies from pesticides. Yet today, U.S. children continue to be exposed to pesticides that are known to be harmful in places they live, learn and play.” – Pesticide Action Network North America (PANNA)[26]