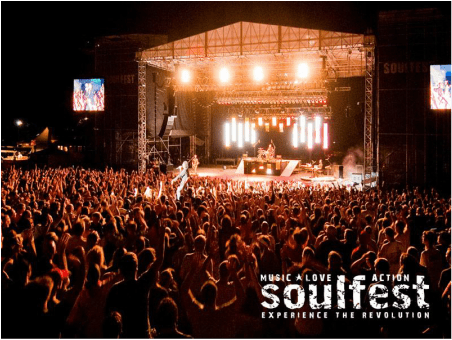 Soulfest in Gilford, New Hampshire, one of the biggest contemporary Christian music festivals, is Exhibit A that music is at the heart of the one-world “church.” Since at least 2002, the festival has had a Roman Catholic presence, and this year promises more of the same. The August 6-8 festival will feature a daily Catholic Mass and performances by Roman Catholic musician Matt Maher.

Daily Mass was celebrated Thursday through Saturday at 10 a.m., with a lively music ministry guided by the talented Matt Maher, one of the most popular, critically-acclaimed Catholic musicians in the country. … David Simon … explained how wonderful it is to have daily Mass at Soulfest.

‘It’s an opportunity for Catholics who left the Church to want to come home; it’s such an opportunity to see the power of the Eucharist’” (“Strong Catholic Presence at Large Music Festival,”Catholic News Agency, Aug. 13, 2009).

The Catholic Mass has occultic power. I have read the testimonies of many individuals who have been converted to Rome through attending the Mass. In 2009, the Catholic band Glenridge performed on the main stage at Soulfest. The members of Glenridge testify of their one-world church faith as follows: “We love being Catholic, but know that we are one body under the love of Jesus Christ no matter what Christian church you go to on Sunday” (Ibid.).

Soulfest has a strong emphasis on social work and social justice, another major element in building the one-world “church.” Donald Miller, emerging church author of Blue Like Jazz, has spoken at Soulfest.

(For more information about the bands and artists mentioned in this report see The Directory of Contemporary Worship Musicians, which is available in print and as a free eBook from www.wayoflife.org. Every preacher and Bible teacher should own and use this valuable resource.)