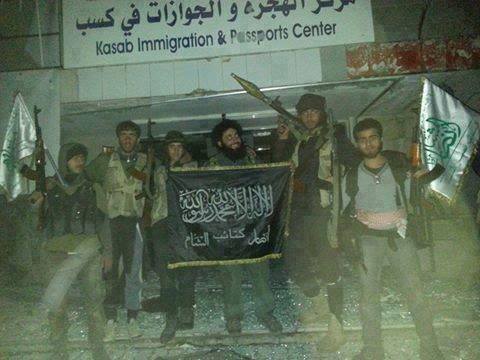 They forced the civilians to flee up to the hills. The Syrian Army and the Self Defense Force militia (SDF) fought for three days and drove the jihadists out, on March 25th.

What is very significant is the fact that that these jihadists were sent by the Turkish government, and that the Turkish government was actually shelling the village of Kessab. Here is a video obtained by Shoebat.com, of a villager revealing how the Turks shelled the village, and of a poor Christian weeping as he explains how the Muslims attacked him and shot his wife in the head as they were driving, and how he drove in a hot chase pursuit as the terrorists shot at him. Watch the video and see the misery and pain these people go through:

The Muslim attackers took two guard posts overlooking Kessab, and Islamic snipers then began to aim and fire upon the Christian civilians. The local Armenian leadership committee was able to evacuate 670 families into areas in neighboring Basit and Latakia (may God bless them!)

On March 22nd, Syrian soldiers executed a counteroffensive on the jihadists, but on the 23rd the Muslims took the remaining Armenian families hostage and then proceeded to desecrate the town’s three Armenian villages. Shoebat.com was able to obtain several videos of the battle in the village between the jihadists and Syrian soldiers in the village:

Video of jihadists entering the village, they even have a tank:

Another video of intense fighting between Syrian soldiers and jihadists:

Bashar al-Assad’s government protested to the UN to take Turkey into account for giving cover for the terrorists as they crossed the border into Kessab. Ken Hachikian of the Armenian National Committee of America made it clear that it is Turkey who is responsible for this attack on the village, and made this protestation:

The Armenian-American community stands united in seeking to reverse the events of the last several days, which has seen militant extremists stream into Kessab from Turkey. We are strongly urging our government, led by President [Barack] Obama and congressional leaders, to send a firm message to Ankara that the safe haven and safe passage being offered to these militant groups intent on destroying Kessab must end … Turkey’s facilitation of al-Qaeda affiliated foreign fighters and their attacks on innocent civilians in Syria undermines ongoing US and international efforts to bring peace to a country ravaged by violence for far too long. For Armenians in the region and around the world, Turkey’s actions are a horrifying and bitter reminder of the genocide committed against the Armenian, Pontian and Syriac communities by Ottoman Turkish authorities from 1915-1923.

Shoebat.com has been for years exposing Turkey’s plans to revive the Ottoman Empire, and there is no doubt that they want to resume and ultimately finish where they left off in the Armenian Genocide. Shoebat.com reported on the human slaughterhouses going on in Syria right now, and how they are massacring Armenian Christians in these houses of slaughter. Turkey is the driving force behind the jihad in Syria, and there is no doubt that they are organizing this violence to annihilate the Christians there.

PLEASE DONATE TO SAVE THE CHRISTIANS IN SYRIA