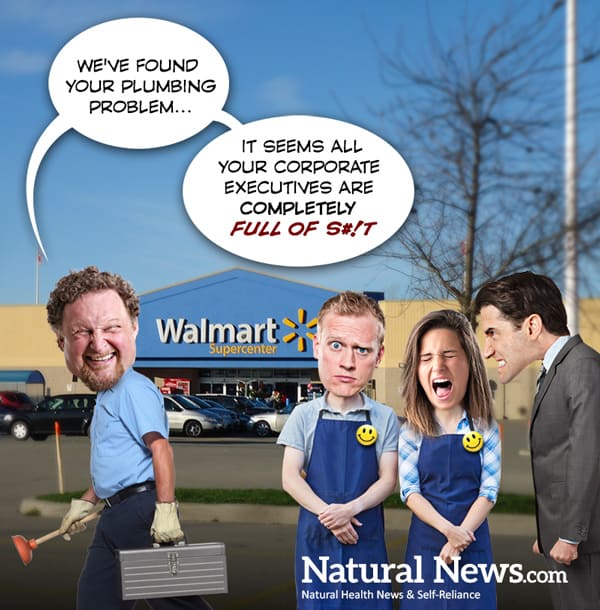 (NaturalNews) Wal-Mart has suddenly announced it is shuttering five stores from Florida to California for a six-month period due to what the company claims are “plumbing problems.” Nobody except the ultra-gullible really believes the Wal-Mart cover story, however.

“The retail chain announced Monday that five stores are shutting down – one in Brandon, two in Texas, one in Oklahoma and one in California – due to clogging and drainage problems,” reports News Channel 8 in Florida.

The sudden closures were only announced five hours before they took place, thrusting thousands of employees out of work with little or no notice.

“Wal-Mart announced the temporary closure of the Midland Drive store at 2 p.m.” reports the Midland Reporter-Telegram. “Monday, five hours before the designated closure time. No signs have been posted at the store’s entrances, as of 2 p.m. Wal-Mart also closed stores in Brandon, Florida, Tulsa, Oklahoma, and Livingston on Monday for plumbing repairs, according to news sources in each of those respective cities.”

Seriously? Does anybody believe the official explanation?

What’s really raising eyebrows across the web is the mathematical improbability that five large Wal-Mart stores would all experience catastrophic plumbing problems at exactly the same day, all requiring exactly the same duration of closures: six months. The very idea that a plumbing problem could be so catastrophic that it would require shuttering an entire store for six months ranks right up there with some of the most ridiculously implausible cover-up explanations we’ve heard over the years such as “steel-reinforced concrete buildings suddenly collapse in perfect demolition style when they suffer from a few small office fires.”

The cover story is so lacking in credibility that every informed person across the internet is laughing like crazy at the sheer stupidity of it. One news organization, Channel 8 in Brandon, Florida, looked into the claimed plumbing repairs and found it was a fictional cover story. “…8 On Your Side has found no paperwork and no work done on the plumbing,” reports WFLA.com. “According to Hillsborough County, Walmart didn’t notify the county’s permit department either. No one there has heard a peep from Walmart about any major repairs.”

The news outlet goes on to report:

On Tuesday, 8 On Your Side stopped by the Walmart, and found no plumber in sight at the Brandon Supercenter, just hundreds of confused and concerned customers. 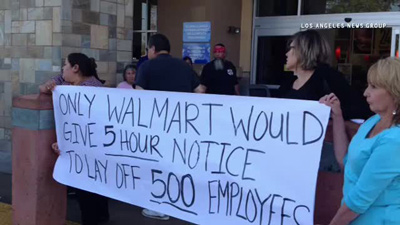 Here’s a list of the cities where Wal-Mart stores are confirmed closed for six months: 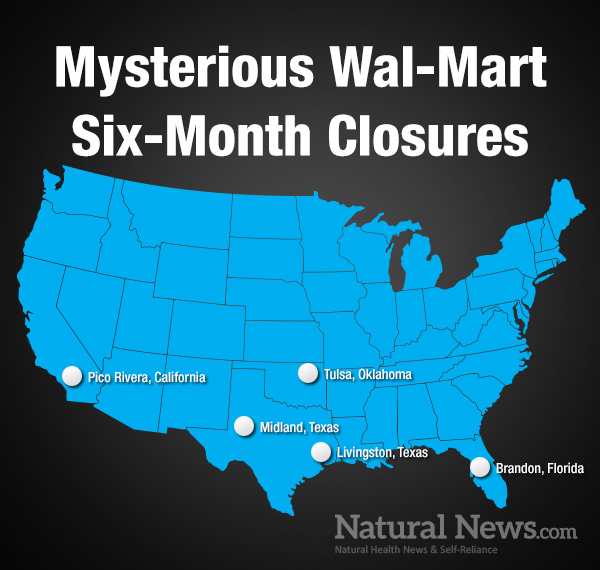 Reason #1) Wal-Mart apparently wants us to believe that it is impossible to repair plumbing problems without shutting down your business for six months. This idea is totally insane: plumbers repair catastrophic problems all day, every day, while businesses remain open everywhere.

Commercial plumbing companies conduct heroic repairs at hotels, casinos, factories and large retail establishments without interfering with those business operations. This loony idea that five Wal-Mart stores have suddenly — and simultaneously — experienced catastrophic plumbing problems requiring stores to close can only be believed by the most incredibly gullible people alive today. (The same people who might vote for another Clinton or another Bush, it turns out…)

Reason #2) If you were going to have a commercial plumbing repair team tackle real problems across your retail stores, you’d schedule their closures sequentially (one after the other) so that the same team of professional plumbers could tackle them one at a time. You wouldn’t close all five stores simultaneously and suddenly, without notice.

Reason #3) Any plumbing problem so catastrophic that it needed the stores to be closed would require municipal permits to address. Yet no permits exist. “According to Hillsborough County, Walmart didn’t notify the county’s permit department either. No one there has heard a peep from Walmart about any major repairs.” – Channel 8 News.

Reason #4) The closure of just one Wal-Mart store would cause revenue losses of hundreds of thousands of dollars a day. Across five stores, we’re talking millions of dollars each day, multiplied over six months. In addition, the entire existing inventory of food at those Wal-Mart stores is a total loss because it will largely expire over the next six months (Wal-Mart says it’s donating all the food on store shelves to local food banks). Does anyone seriously believe that Wal-Mart is going to sacrifice possibly $100+ million in revenues and inventory losses just to fix some plumbing problems?

Reason #5) The geographic dispersion of the Wal-Mart centers being closed raises a lot of questions about the emptied stores possibly being used as “staging areas” for some other purpose that isn’t being communicated to the public. “Astute story commenters were quick to point out that any plumbing problem can be fixed in much less time than 6 months, even in such large supercenters, and to have several of these 6-month closings all at once in states tied to Jade Helm 15 and martial law exercises (Florida, Texas, California and Oklahoma) reeks of something much deeper than ‘plumbing issues,'” reported All News Pipeline. “One reader tells us that one of these Wal-Mart stores had just recently been remodeled and didn’t have any plumbing problems while the note below is from a source who recently called her local Wal-Mart and discovered they may NEVER reopen!”

Why do YOU think Wal-Mart is suddenly closing five stores for six months?

Is this really the world’s worst coincidence of catastrophic plumbing failures? Or is there something more to this story?

Sound off in the comments section below.