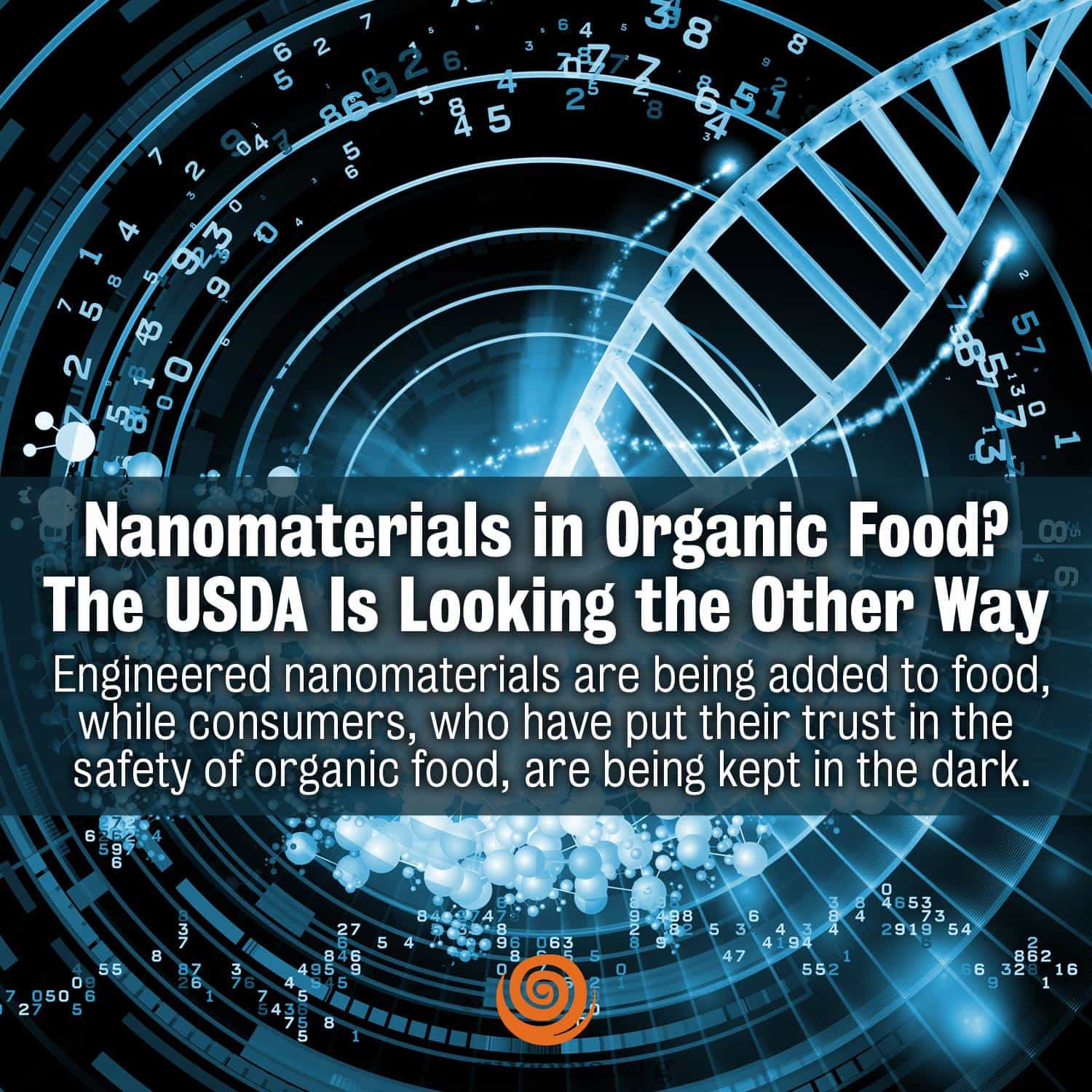 As of today, the USDA National Organic Program (NOP) has taken no action to implement this recommendation. Engineered nanomaterials are being added to food, while consumers, who have put their trust in the safety of organic food, are being kept in the dark.

Nanomaterials are tiny particles measured in nanometers, or billionths of a meter. Nanoparticles have at least one dimension of less than 100 nanometers (nm). As a comparison, a strand of DNA is about 2 nm across; a red blood cell is 7,000 to 10,000 nm across. Due to their small size, nanoparticles ingested in food may move throughout the body in unknown ways.

Common ENMs include titanium dioxide, nanosilver, zinc oxide, aluminum, and carbon nanotubes. The properties of ENMs differ significantly from the properties of larger particles, even those of the same chemical composition.

Many people are unaware that engineered nanomaterials can be added to foods, fruit and vegetable coatings, food packaging materials, supplements, and cosmetics.[2] Titanium dioxide increases the whiteness of mints, milk, yogurt, and dairy substitutes. Nanomaterials are also used in chocolate, salad dressings, cereal, pasta, and other common foods.

Many food companies have invested heavily in nanotechnology, the science of creating and using nanomaterials. There are many applications for food use, but, according to a 2014 report by Friends of the Earth, “the extent to which nanomaterials are used along the food chain continues to be shrouded in mystery because of the lack of publicly accessible product registries or product labels.”[3]

In 2005, the Project on Emerging Nanotechnologies (PEN) established an inventory of consumer products that advertise having ENM content.[4] The inventory at one point contained more than 1,000 entries. However, funding for the inventory has run out, and PEN has not added to the database since August 2009. In fact, several items have recently been removed. Foods listed in May 2014, after they were mentioned in a Mother Jones article,[5] were later removed from the database. Because labeling is not required, manufacturers have removed references to nanomaterials from their product labels; as a result, it’s no longer possible to verify that the products contain nanomaterials.

Use of nanomaterials in food is not regulated by any U.S. federal agency.[6] The Food and Drug Administration (FDA) does not require nanomaterials to be listed on the product label. Consumers may assume that the lack of federal oversight means that nanotechnology has been well studied and proven safe, but such is not the case.

The Friends of the Earth report concludes that nanoparticles in food can harm human health, although the specific effects are not well understood.[7] The report explains that ENMs are more chemically reactive and more bioactive than larger particles of the same chemicals. Several other organizations have written reports urging caution regarding the many uses of nanotechnology in food, and requesting oversight from federal regulatory agencies.[8] [9] [10] [11]

Due to their very small size, nanoparticles are more likely than larger particles to enter human cells, cross the blood brain barrier, or move across the placenta from mother to fetus. They’ve been shown to damage DNA, cause lesions on the liver and kidneys, and disrupt cellular functions.[12]

The NOSB was concerned about this new technology being used in organic food. In four consecutive meetings, nanotechnology was on the NOSB agenda (spring and fall, 2009 and 2010). The NOSB commissioned a technical evaluation, listened to public comments, and wrote a guidance document that concluded, “There is overwhelming agreement within the organic industry to prohibit nanotechnology in organic production and processing at this time.”[13]

Several public interest groups urged an immediate prohibition on nanotechnology: the Center for Food Safety, Consumers Union, Food and Water Watch, Institute for Agriculture and Trade Policy, International Center for Technology Assessment, National Organic Coalition, Organic Consumers Association, and True Food Network. Consumers Union elaborated that the USDA National Organic Program should consider nanotechnology to be an excluded method, rather than debate whether each unique chemical is a prohibited material.

Trade organizations and industry groups, on the other hand, oppose any prohibition on engineered nanomaterials in organic food. As a compromise, the NOSB suggested a symposium to aid in evaluating the uses and regulation of nanotechnology, rather than an immediate prohibition of nanomaterials.

Consumer groups recommended a firm stance to prohibit nanomaterials in organic food, rather than waiting for a symposium. The Institute for Agriculture and Trade Policy (IATP) noted that a symposium would not yield any new information on the hazards of nanotechnology “[g]iven the refusal of industry to submit food and agri-nanotechnology product data for risk assessment and regulatory review.”

The USDA National Organic Program’s only response to the NOSB recommendation came in a December 2010 memo stating the NOP “intends to gather additional information about how nanomaterials are regulated and used in agricultural production and handling. …[T]he NOP will gather information from other agencies…and report back to the NOSB.”[14] Four years later, it has yet to do so. After two years of volunteer effort by board members, and overwhelming agreement from the organic community, why would the NOP fail to act?

Engineered nanoparticles are clearly synthetic, and the organic community clearly wants to prohibit them from organic food and packaging materials. Congress gave the NOSB specific power to regulate synthetics used in organic food production. It’s time for the USDA to take action on this NOSB guidance document—prohibit ENMs, and ensure that certifiers prevent this threat to organic food.

[5] Philpott, T.  2014.  Big Dairy is Putting Microscopic Pieces of Metal in Your Food.  Downloaded from http://www.motherjones.com/tom-philpott/2014/05/nanotech-food-safety-fda-nanomaterial.

[10] NanoAction.  2010.  Principles for the Oversight of Nanotechnologies and Nanomaterials. 16 pp.

note”>[14] Memorandum for the Chairperson of the National Organic Standards Board.  December 17, 2010.