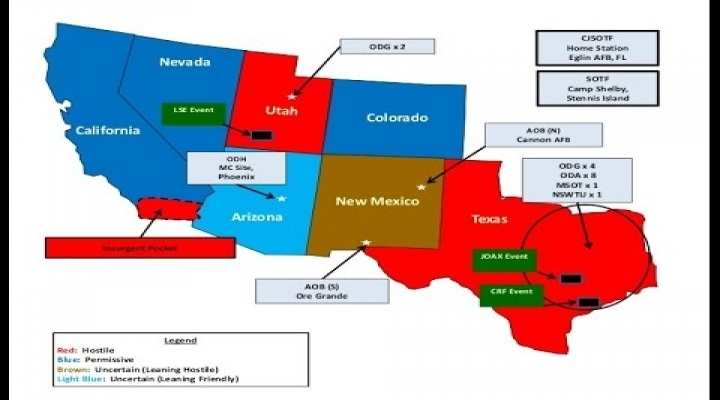 According to the London Daily Mail, Army spokesman Lt. Col. Mark Lastoria said, “‘This exercise is routine training to maintain a high level of readiness for Army Special Operations Forces because they must be ready to support potential missions anywhere in the world on a moment’s notice.’”

Units participating in the operation include Army Green Berets, Navy SEALS, USAF Special Operations Command, USMC Special Operations Command, USMC Expeditionary Units, Army 82nd Airborne Division, and Interagency Partners (whatever and whoever that is). Over 1,200 troops will participate. For purposes of the exercise, the states of Utah and Texas, and parts of southern California, are designated as “hostile.” Local mayors and county commissions have been notified of the operation and have already signed off on it.

To be sure, the U.S. military often conducts off-base exercises; there is nothing new about that. However, this operation might be the largest off-base training exercise on the U.S. mainland. It is certainly one of the most aggressive.

In this exercise, Special Forces troops will practice all sorts of activities including extractions, searches and seizures, urban camouflage, etc. According to the Houston Chronicle, “[A]mong the planned exercises, soldiers will attempt to operate undetected among civilian populations.

“Residents, in turn, will be asked to report suspicious activity in order to gauge the effectiveness of the soldiers.”

According to USSOCOM, the exercises will only be conducted between 11pm and 4am. Pray tell, how difficult will it be for Special Forces troops (the best of the best) to operate undetected and “blend in” during the middle of the night? That part of the military’s description makes no sense to me at all.

We already have millions of taxpayer dollars being spent on mass media advertising that tells people, “If you see something, say something.” Now we are going to “practice” reporting “suspicious activity”? Believe it or not, there was a time in this country when such an idea would have been considered abhorrent by the American people as resembling Nazi Germany or Red Russia too much. Then again, most of our World War II generation has passed, hasn’t it?

At the risk of sounding paranoid, ever since 9/11, our federal government has targeted America’s homeland for all sorts of surveillance, spying, snooping, etc. The National Security Agency (NSA) routinely collects virtually all electronic communications, telephonic transmissions, etc., from the entire American citizenry. The U.S. Congress and federal courts have become nothing more than rubber stamps for an executive branch of government determined to know the most intimate details of every person in the nation. The United States now has the dubious distinction of being the most spied-on country in the history of the world.

For the first time in U.S. history, we have U.S. Northern Command (NORTHCOM), a full active military division (3rd Infantry Division) assigned to the Continental United States. We have the Department of Homeland Security (DHS), which has turned our local and State police agencies into miniature military units, and has armed them with all sorts of military weaponry and equipment–including some of the most sophisticated intelligence-gathering equipment in the world.

The Patriot Act, the Military Commissions Act, NDAA, etc., authorize the federal government to basically treat the U.S. citizenry as “enemy combatants.” As far as the passage of these laws is concerned, we Americans have already lost our right to trial by jury, habeas corpus, the right to have an attorney, the right to a speedy trial, the right to be secure in our persons, houses, effects, etc. Martial Law may not be the experience of most U.S. citizens YET, but understand that the laws are already in place for such an event.

The whole idea of practicing “extractions” (a nice word for kidnappings) in U.S. cities sends chills up my spine. Using the aforementioned laws, this kind of activity has already been made “legal” in this country. So, first we have laws authorizing such activity, and now our military troops are practicing doing it? Please tell me, again, how we have nothing to worry about.

Folks, please take a look at what is happening in this country: our local and State police are being militarized; we have ubiquitous laws being proposed and passed (by both major parties) denying the Bill of Rights; we have Twentynine Palms Marine Corps surveys asking Marines if they would turn their guns on the U.S. citizenry; we have repeated attempted gun confiscation coming from Washington, D.C.; we have hundreds of military field-grade officers being dismissed because of their loyalty to the U.S. Constitution; we have a federal foreign policy that seems hell-bent on inciting most every country in the world against us, while practically giving a red-carpet invitation for any would-be terrorist to waltz across our southern border; we have a CIA that gives some of the most powerful weapons in the world to just about any third-world resistance group (including elements of Al Qaeda and, believe it or not, ISIS) that comes along (The U.S. government is far and away the largest gun dealer in the world!), while its sister government organizations, such as the ATF, think we Americans can’t be trusted with .223 ammunition; we have Democrat and Republican presidential administrations alike that use the IRS as a political mafia against people with dissenting opinions; we have a national news media that has become nothing more than a propaganda ministry for the federal government; we have politicians from both parties in Washington, D.C., that can only be described as blood-thirsty war-mongers; we have politicians at the local and State levels who seem determined to turn their communities into a Police State (and some Homeowner Associations are even more Naziesque than the federal government); and, for the most part, we have an apostate, cowardly church pulpit that is doing its dead-level best to turn the Christian people of America into sheepish servants of the state.

I THINK THE AMERICAN PEOPLE HAVE GOOD REASON TO BE A LITTLE PARANOID.

I posted a few preliminary thoughts on my Facebook page regarding this subject before writing this column. Here are a few comments from my Facebook followers:

Jeanie: “Their supposed reasons for this exercise [don’t] make sense. They won’t be blending in with civilians in third world countries. The only purpose I can see is to use force against us one day.”

Mark: “Pastor, just because we are a bit paranoid doesn’t mean there isn’t someone out to get us.”

Jason: “The exercise itself is not a direct danger. It is, however, practice to [acclimate] soldiers and citizens to military action in their neighborhoods.”

And, of course, there is this kind of response from Terry: “Worry? No! We should worry about you.” [Meaning, yours truly.]

I realize it is extremely difficult for Americans to believe that their own government could actually turn against them. And, I’m sure that many people will tell me that to think otherwise is alarmist and extremist. But, isn’t that exactly what the citizens of every country overtaken by its own government said? “That can’t happen here,” have been the last words of millions.

The fact is, the vast majority of us cannot know what the true intention of Operation Jade Helm might really be–and that includes the military personnel who are commanding it and participating in it. I am convinced of this much: the federal government–and its propaganda ministry in the national news media–almost NEVER tells us the truth. Of that much, I am absolutely certain.