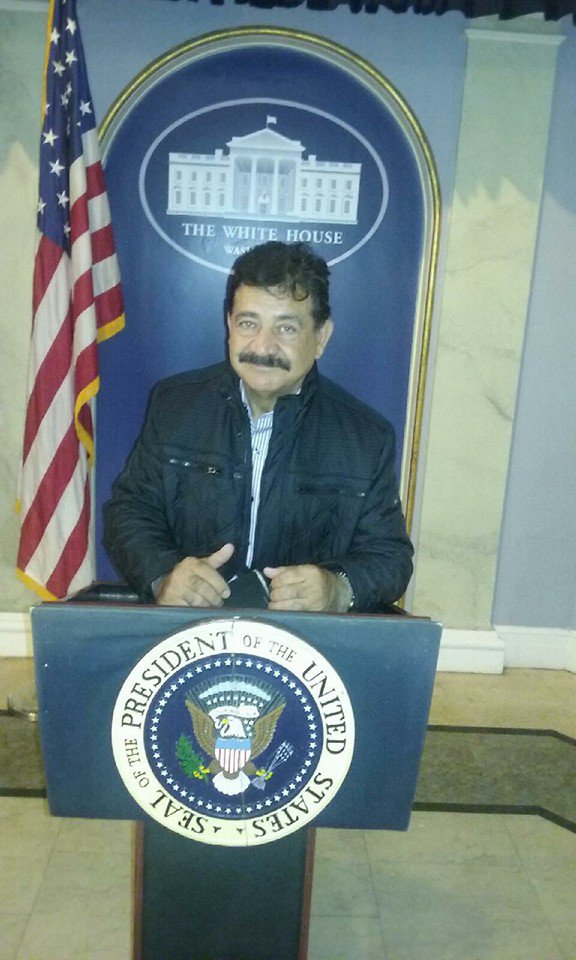 Thanks to Sandy for sending this to me.

Seddique Mateen, father of the Orlando killer and outspoken supporter of the Taliban, has also been a guest at Obama’s White House and Hillary’s State Department.  On his Facebook page – which has since been deleted – the senior Mateen publishes photos and makes it sound as though he were meeting with senior staff.  But who knows?

This is the same guy who described Omar as a “good son” after the shooting.  Of course he also describes the Taliban as a good government so that should give you a frame of reference for what he considers good.

Did he meet directly with President Obama?  Did he meet with staff at all?  That’s unclear.  It’s unclear who he met with and no one has returned calls for a comment.  The photos come from Mateen’s Facebook Page where he claims he was in Washington to discuss Afghan affairs with government officials.

But why is Seddique Mateen standing behind the President’s podium in the mock White House Briefing Room?  He insinuates on his Facebook page that he was there to meet with Administration officials and perhaps the President himself.  Again, we can’t verify his claims. Still, it’s curious that the father of the Orlando killer, a Taliban supporter who claims to be some sort of Afghan President in waiting was there at all.

According to Mateen, he has been a frequent visitor to the nation’s capitol where he claims contacts at the highest levels of government.  Mateen claims he also held meetings at Hillary’s State Department.

Gee, that’s strange.  Especially in light of the fact that Hillary Clinton killed a Department of Homeland Security investigation that related to Omar Mateen’s mosque, the Islamic Center of Ft. Pierce.  Stopped the investigation dead in it’s tracks.  And made sure that the records were destroyed so that the case couldn’t be reopened.  Hillary sure likes deleting things.

Meanwhile, Omar Mateen was working for a Department of Homeland Security contractor and was being investigated by the FBI – who somehow found nothing and let him continue on his deadly path.

It’s no wonder both Hillary and Obama are so eager to call Omar Mateen a lone gunmen and try and change the subject to “gun violence” and call for disarming law abiding Americans.  They don’t want anyone looking into their relationship – if any – with the Mateen clan and their compatriots.

Oh, right, 1 more thing.  Here’s Seddique Mateen in the United States Senate outside of the Democrats’ Foreign Affairs Committee offices.  Was he just posing, trying to make himself look important or was he really holding meetings?  As of now, no one’s talking.

Interesting.  Mateen claims he was there meeting senior Congressional staff.  They’re all trying to cover it up now that the truth about the Mateen family is out.  Seddique is a Taliban supporter and his son is a murderer who swore allegiance to ISIS on whose behalf he slaughter innocent Americans.  And Mateen apparently, has been very friendly with the Democrat establishment in Washington.

Why isn’t anyone else talking about this?

You’re not going to find this in the mainstream media.  They’re too busy shilling for Clinton and Obama.  But the pictures don’t lie.  And neither do the dead bodies in Orlando.

What do the pictures prove by themselves?  Not much.  But it is all very odd.  Why was Seddique Mateen in Washington?  Did he really have the meetings and contacts he claimed to have?  It’s unclear at this point, but so far no one is saying anything.  None of our calls for comment have been returned.

Orlando Killer’s Father Blames The Pulse Nightclub For The Shooting

Omar Mateen’s father, Seddique.  He is many things.  He is an immigrant.  He is an outspoken supporter of the Taliban.  He’s the father of an ISIS terrorist who murdered 49 Americans in cold blood and injured more than 50 more.  He’s someone who has meetings with Obama Administration officials in the White House, people in the State Department, and senior Senate Democrats.

He’s also a guy who goes on television and blames the Pulse Nightclub for his son’s murder spree.


His theory is that the Pulse was not prepared for so many patrons that night.  What does that have to do with anything?  They weren’t prepared for a shooting?  Were they supposed to be?

What did Seddique know and when do he know it?

What was he doing at the White House? Who did he meet with?

What was he doing at the State Department?  Who did he meet with?

We know Seddique Mateen is a Taliban supporter, so we know what he was teaching his son – who he described as a “good son” – while he was growing up.  What role, if any, did he play in the shooting that he thinks is the Pulse’s fault?