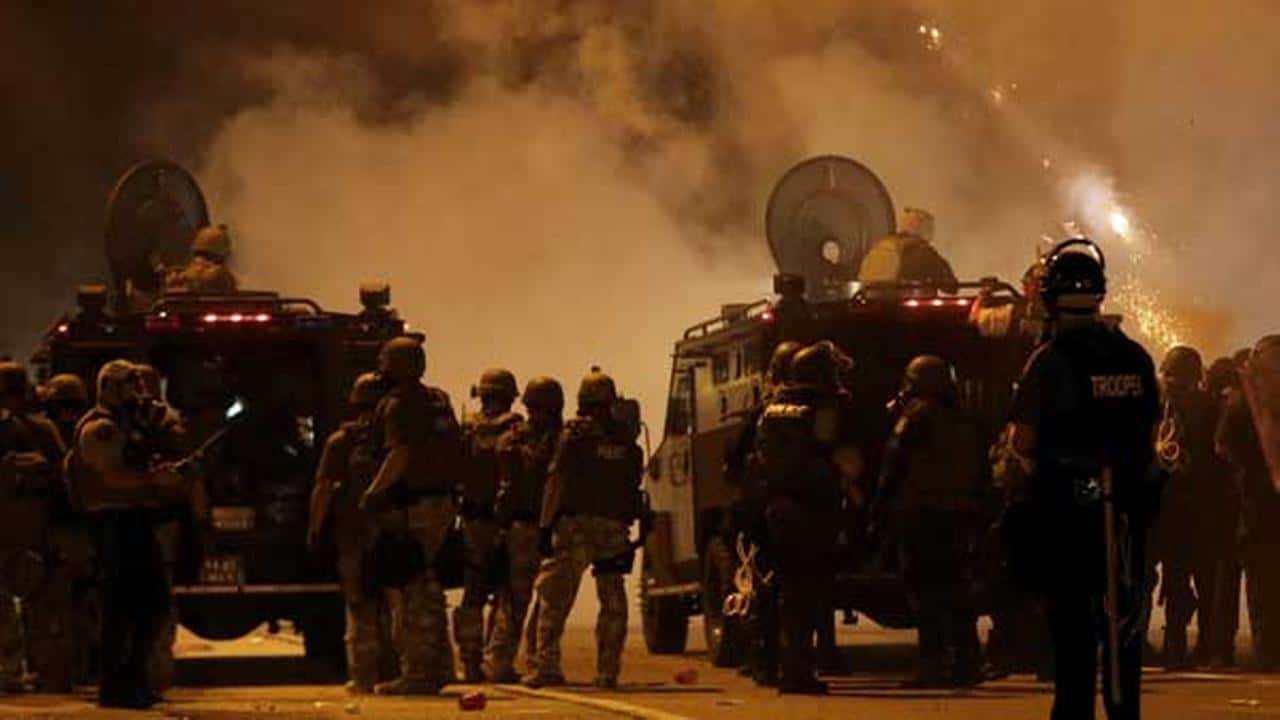 When you turn on the television news and see all the armored vehicles, men in army green camouflage outfits with military helmets, snipers pointing their guns at crowds of unarmed civilians, and tanks you would swear you were looking at the American military in Iraq. But in reality you are looking at Ferguson, Missouri right here in America. The looting and protests in the Ferguson neighborhood streets over the shooting of Michael Brown, an 18 year-old black teenager, do not warrant an Iraq-invasion military response. But the greater danger is that this military-police response is not an isolated incident, for all across the nation local police have purchased armored vehicles, military outfits, night-vision goggles, sniper equipment, silencers, military helicopters, drones, and body armor that for all practical purposes has transformed the police into a military force.

With the racial tensions already set to explode in Ferguson, why would anyone in their right mind send in a military-style force where armed snipers are aiming their guns into the faces of unarmed crowds? That kind of response is likely to incite violence, not restrain it. Now in fairness to the police a very strong argument can be made that in many places in America there are armed gangs who are heavily armed and this kind of military force is necessary to send a loud and clear message to Ferguson and other places across America that violence, looting, and riots will not be tolerated. There were some pretty grim pictures taken from a news helicopter of a truck driver being brutally beaten in the inner city of Los Angeles after the Rodney King riots. In addition, in Los Angeles alone there have been the Watts riots and other riots where stores were looted. These small stores, which were owned by Vietnamese and Korean-Americans and other Asian-Americans had to be protected by their owners, who climbed to the roofs of their stores armed with guns to protect their property from the looters and rioters. The anarchy that broke out was so widespread that the police could not get in to protect the store owners.

There was a long period of time when police officers across America were literally outgunned by gangs and other criminals, who had sophisticated assault rifles, machine guns, and other weapons. Clearly, when criminals have superior firepower it not only endangers our law enforcement officials, but invites anarchy. Perhaps this is why the decision was made to show a military-style police force with armored vehicles, tanks, snipers, etc.?

We now live in a post-911 world where the police and other agencies have been given expanded powers starting with the Bush Administration, supposedly to combat potential terrorist threats. However, the war against terrorism has not come without a cost. America’s freedoms have been diminished and it appears every American is under constant surveillance 24 hours per day in the quest for Metadata. When America ceases to be America, the case for the argument that Osama bin Laden won is not as strange as one may think. If America continues to move from the freest nation in the world into a totalitarian state, then America has been defeated just as surely as if someone had dropped a nuke on a U.S. city. Totalitarianism is death and nuclear radiation is death. Pick your poison.

Our Founding Fathers established a Constitutional balance of powers between the different branches of government that was designed to protect those basic freedoms. The Bill of Rights guarantees Freedom of the Press, Freedom of Speech, Freedom of Religion, and so on. Those freedoms and others have now been undermined as part of a long term strategy to radically transform America. What some call an “invisible government” of extremely wealthy and powerful people who have been operating in our nation since its founding and whom our Founding Fathers warned us about have managed to establish control over our nation. This invisible government has installed its men and women into both political parties for many decades while cleverly maintaining the illusion of democracy. In addition, ever since the advent of mass media, the elites have raised up an almost all-powerful and unelected Fourth Branch of Government, the media, which they control through six major corporations. The consolidation of power through the use of propaganda and scientific mind control is staggering.

There is no question that America as we once knew it is being destroyed and an Orwellian State controlled by Aldous Huxley’s “Scientific Elite” is now in place. There appears to be very little mainstream protest to these trends because the vast majority of our political representatives from both parties are bought and paid for and they are paid well to keep their mouths shut. The vast majority of media personalities are also bought and paid for. The intellectual dishonesty and the willingness of certain media personalities to be used for propaganda purposes are appalling. Dressed in designer clothing, Botoxed and ever image-conscious, these media personalities spout their lines on cue, exactly as they are told. The most insidious form of the perversion of a free press comes in the form of the so-called conservative television and radio talk show hosts, authors, and other media personalities. They know full well that they are part of a dog and pony show to occupy the masses with the illusion of a meaningless conservative revolution. There are many notable exceptions to be sure, but most are frauds. Some of the “super conservative” media personalities seem to be the product of some kind of MKULTRA program. The constant spinning inside their eyes, the psychological fragmentation of their presentations, and their subtle, but strange facial expressions and smiles are reminiscent of the 1960 movie, Psycho, directed by Alfred Hitchcock and starring Anthony Perkins and Janet Leigh.

Anthony Perkins plays the role of Norman Bates, who murders Janet Leigh in that infamous shower scene. Towards the end of the movie we discover that Norman Bates is dressed like his dead mother in a dress and a wig, and has a large knife in his hand. Next to Bates is the somewhat preserved but horrible looking corpse of his mother sitting in a rocking chair. When Norman is finally arrested for the murder, a psychiatrist discovers that he was raised by a domineering mother, who eventually had a lover. He became pathologically jealous and murdered his mother and her lover. In order to deal with what he did Norman later developed a split personality to erase the murders from his memory. He goes back and forth between his Norman personality and his mother personality, which completely dominates him and causes him to commit the murders.

The psychological distortion in the eyes and facial expression of Bates is a tip off that something is not right inside his head. So the question has to be raised again, why do some of these media personalities and politicians remind me of Norman Bates? Not that they would commit murder, but their eyes just don’t ring true.

There is a dynamic relationship between the spiritual and moral breakdown of America and the loss of freedoms. History shows that when any culture deteriorates, some kind of authoritarianism rises to manage the chaos. Due to the break down of the family unit and the rejection of spiritual values, we now have countless millions of people who are psychologically imbalanced. All psychological data states that children raised in families without fathers have a far higher statistical risk of getting involved in crime and violence. This is not a racial issue; this is a psychological issue. You add the psychological potential for crime and violence along with hard core drugs like Meth and sophisticated weapons and you have a potentially explosive mix.

How do you deal with the problem? One way is through a military-style police presence and a show of force. There are logical and rational reasons for that kind of approach, but the downside is America begins to look like Iraq. When America begins to look like Iraq and the people who have the power to stop the drift towards totalitarianism refuse to take a meaningful stand, by default America is becoming an Orwellian State.

Some people believe that Edward Snowden is a defender of our civil liberties against intelligence agencies like the NSA, but the NSA and other intelligence agencies are actually necessary in a global Orwellian world. This does not mean that the NSA and other intelligences should not be subjected to Constitutional accountability and that the most vigorous protections should not be put in place to protect the rights and freedoms of the American people, for there is great danger here.

But there is also unprecedented danger from the very active intelligence agencies of Russia, China, militant Islamic regimes, rogue nations, terrorist groups, criminal cartels, and wealthy individuals who have access to the most advanced technologies. These nations, groups, and individuals could crash the Stock Market, shut down power grids, transfer billions of dollars out of accounts, and create any number of deadly scenarios.

Like it or not, the NSA and other intelligence agencies are necessary, but they also are potential evils. If you get rid of the intelligence agencies you leave your front and back door wide open to every threat on Planet Earth. Is Edward Snowden simply a courageous “whistleblower? I really don’t know. But I do know that Russia still has KGB era style surveillance on its citizens. So let’s not be naïve regarding Snowden. For a start we could look very carefully at his eyes, facial expressions and other visible clues to his true nature. It is amazing when we use our God-given perceptions, how much information there is to see.