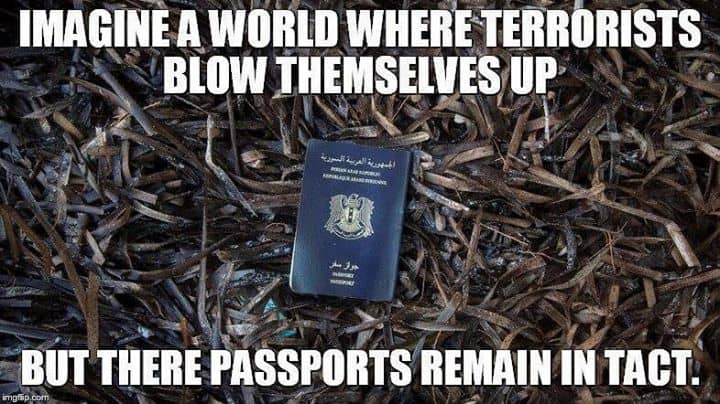 A Syrian passport is found next to the body of a suicide bomber who was just blown up. Seriously?! Ridiculous! It brings to mind the passport of one of the 9-11  “terrorists” that was “found on the sidewalk” in New York. Yeah, right! It’s hard to know how many actually died in these horrible events, but regardless of the number it is tragic.

Friends in Europe are reporting a climate of chaos and fear, and it is all by the design of those who are systematically bringing about the New World Order/global government, which will eventually be under the control of a powerful world leader, heralded as the “savior” of mankind who brings about peace from all the chaos that the “bad humans” created. Sound familiar?

If you’re still parked in front of your television set letting the mainstream media do your thinking and a conspiracy of these proportions seems outrageous to you, consider the words of renowned occultist and 33rd degree Freemason – Albert Pike (1809 – 1891), who compiled “Morals and Dogma,” the philosophical rationale for the Scottish Rite. Albert Pike claimed to have received a vision, which he described in a letter, dated August 15, 1871. This letter graphically outlined plans for three world wars that were seen as necessary to bring about the One World Order. It is remarkable how accurately this has predicted events that have already taken place.

“The First World War must be brought about in order to permit the Illuminati to overthrow the power of the Czars in Russia and of making that country a fortress of atheistic Communism. The divergences caused by the “agentur” (agents) of the Illuminati between the British and Germanic Empires will be used to foment this war. At the end of the war, Communism will be built and used in order to destroy the other governments and in order to weaken the religions.” 2

“The Third World War must be fomented by taking advantage of the differences caused by the “agentur” of the “Illuminati” between the political Zionists and the leaders of Islamic World. The war must be conducted in such a way that Islam (the Moslem Arabic World) and political Zionism (the State of Israel) mutually destroy each other. Meanwhile the other nations, once more divided on this issue will be constrained to fight to the point of complete physical, moral, spiritual and economical exhaustion…We shall unleash the Nihilists and the atheists, and we shall provoke a formidable social cataclysm which in all its horror will show clearly to the nations the effect of absolute atheism, origin of savagery and of the most bloody turmoil. Then everywhere, the citizens, obliged to defend themselves against the world minority of revolutionaries, will exterminate those destroyers of civilization, and the multitude, disillusioned with Christianity, whose deistic spirits will from that moment be without compass or direction, anxious for an ideal, but without knowing where to render its adoration, will receive the true light through the universal manifestation of the pure doctrine of Lucifer, brought finally out in the public view. This manifestation will result from the general reactionary movement which will follow the destruction of Christianity and atheism, both conquered and exterminated at the same time.” source

The average person simply cannot conceive of this level of evil. “Why would they do that?” “What about their own family?” These people are not like the rest of us. They are pure evil, having given their lives over to the worship of satan for power, wealth and control. Their plans would fail if only people were aware of how they are being manipulated and refused to play along. For the Christians who are half awake, they’ve got a tidy lie in place to just “ignore it all and wait for Jesus to show up and save the day.” I don’t know the exact timeline of Christ’s return, but I know this much; the stage is being set for a false “Messiah” to appear on the scene, and as naive as most in the church are about Zionism and the fake “Judeo-Christian” paradigm , they’re likely to fall for his “signs and lying wonders.”

Pray, people. Pray for eyes to see and ears to hear. Pray for believers to wake up and help others to do the same. It’s only a matter of time and this will be brought to the US.

Exactly two months ago we reported that as Europe’s biggest refugees crisis since World War II was getting worse with each passing day, suddenly Europe was flooded with reports of “ISIS Terrorists” posing as refugees.

What we said we disturbingly prophetic when looking at the immediate consequences of Europe’s “infiltration” by the CIA-crated fighters meant to overthrow Assad’s regime, also known as ISIS. Specifically, we said “focus on the propaganda, [which] is in full crisis mode: A recent article in the UK Express Daily claimed that IS “smuggled thousands of covert jihadists into Europe.” It cited a January BuzzFeed interview with an IS operative who said the militants have already sent some 4,000 fighters into Europe under guise of refugees.

This was the first of two punchlines, underlined for effect:

“These speculations have not been confirmed by Western security officials, although that’s only temporary: as the need to ratchet up the fear factor grows, expect more such reports of asylum seekers who have penetrated deep inside Europe, and whose intentions are to terrorize the public. Expect a few explosions thrown in for good effect.”

“And since everyone knows by now “not to let a crisis go to waste” the one thing Europe needs is a visceral, tangible crisis, ideally with chilling explosions and innocent casualties. We expect one will be provided on short notice.”

Overnight we got both numerous “chilling explosions” as well as “innocent casualties” on a sufficiently short notice, just as predicted.

Just one thing was missing: a link between the Paris suicide bombers (for whose actions ISIS has already claimed responsibility) and refugees.

That missing link appeared earlier today today, when the Greek government said that not only was a Syrian passport found next to the body of one of the suicide bombers in Paris yesterday, but that passport was registered on the Greek island of Leros, suggesting that the holder came into Europe claiming to be a political refugee according to Bloomberg.

The passport was recorded by Greek officials on Oct. 3, Greek Deputy Citizen Protection Minister Nikos Toskas said on a statement posted on the ministry’s website Saturday. Toskas said he didn’t know whether the passport was later processed by other authorities elsewhere in Europe.

“On the case of the Syrian passport found at the scene of the terrorist attack.

We announce that the passport holder, had passed from Leros on 03.10.2015 where identified based on EU rules, as decided at the Summit on the refugee issue.

We do not know if the passport was checked by other countries which are likely to be passed by the holder.

We will continue the painstaking and persistent effort under difficult circumstances to ensure the security of our country and Europe, insisting on complete identification of passing through the refugee stream. “

A tangential point, and one again pointing to motive, is that also just two months ago, the Greek defense minister threatened that Greece would open borders to jihadis and other mideast terrorists, if there was no deal. 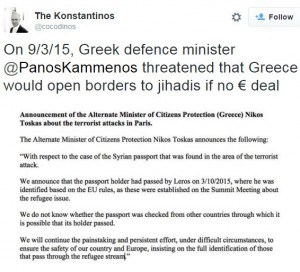 And just to cement the “refugee link”, French newspaper Liberation also reported that an Egyptian passport was also found on one of the attackers the Stade de France.

Now, we admit to not being experts on the nuances, or even basics, of “suicide bombing for terrorists 101“, but is bringing your own passport to an event that will be your last, really that crucial, especially when the passport is such a critical smoking gun?

Also, if a suicide bomber blows up while carrying the passport, does the passport survive intact every single time or just on specific occasions?

Whatever the reason, the trifecta has emerged: just as expected, the link between Syrian refugees, ISIS, and Terrorism has now been set in stone. And Marine Le Pen could not be any happier…

One possible chain of events involves France suddenly finding full-blown NATO support for a renewed attack on Syria and, of course, Assad.