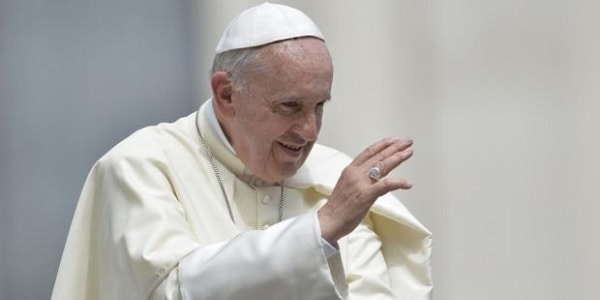 NEW YORK – On several occasions, Pope Francis has indicated to reporters he has “a feeling” his papacy may be short, ending either with his death or by following in Pope Benedict’s rare footsteps with retirement.

Last August, then 77 years old, he discussed the subject with reporters on a return flight to the Vatican from South Korea, as the Guardian of London reported.

“I see it as the generosity of the people of God,” he replied when asked to explain his global popularity. “I try to think of my sins, my mistakes and not to be proud. Because I know it will last only a short time. Two or three years, and then I’ll be off to the Father’s house.”

In a March interview with the Mexican TV broadcaster Televisa he again said he thought his papacy would be short.

“I have the feeling that my pontificate will be brief – four or five years, even two or three,” he said. “Two have already passed. It’s a somewhat strange sensation. I feel the Lord has placed me here for a short time.”

But he said he’s open to emulating Benedict, who in 2013 became the first head of the Roman Catholic Church in 600 years to resign.

“In general, I think what Benedict so courageously did was to open the door to the popes emeritus. Benedict should not be considered an exception, but an institution,” Francis said.

The pope’s statements have drawn the attention of Tom Horn, co-author with Chris Putnam of the 2012 book “Petrus Romanus: The Final Pope is Here.” Making a case for the prophecies of the 12th century Irish bishop St. Malachy, Horn wonders whether Francis might be Malachy’s predicted “last pope.”

Is a 900-year-old prophecy being fulfilled before our eyes? See the fascinating DVD movie, “The Last Pope?”

Horn believes the pope’s statements indicate he could have assassination on his mind.

“This has most recently been raised in my mind between the pope’s reaction to threats by ISIS, who are driven by an apocalyptic vision from a Hadith (collection of teachings and sayings of Muhammad) in which Muhammad allegedly foresaw this end-times caliphate going to war against ‘the armies of Rome.’”

Horn said that while Rome doesn’t have an army, “if a coalition army came together and was endorsed by the pope under the Christian rules for just war, they could be seen fighting under Rome’s banner and you could have a literal fulfillment of the Hadith.”

Horn also referenced the controversial “Third Secret” of Fatima, an apocalyptic prophecy in which the pope is killed by a group of soldiers who shoot bullets and arrows at him as he walks among bishops, priests and Catholic believers who are lying dead around him. The prophecy came from the three Portuguese youths who claimed to have received a series of messages from the Virgin Mary that began in Fatima, Portugal, May 13, 1917.

As evidence Francis would be justified being concerned about an ISIS-backed assassination attempt, Horn pointed to the cover of the fourth issue of “Dabiq,” the official magazine of ISIS. It shows the ISIS flag flying over the obelisk at the center of St. Peter’s Square in the Vatican.

“This edition talks about destroying the ‘Crusader Army’ in Dabiq, Syria (the Hadith prophecy) and couldn’t be more ‘in your face’ about their intentions and their connecting this to the Vatican,” Horn said. “Does Pope Francis secretly believe the Islamic and Catholic prophecies could merge in his assassination?” Horn further asks: “Does the Fatima prophecy and the threat from ISIS describe Vatican City attacked in a large gathering such as will be happening later this year?”

He said the “idea of assassination has obviously been on the pope’s mind and ties to Catholic prophecy.”

“There is also something strange among some Catholic mystics who down the years have suggested the ‘Final Pope’ would arrive, but that shenanigans behind the scenes (possibly during conclave, as in the last “election”) would temporarily place a cardinal who was ‘not canonically elected,’” Horn said.

Therefore, he continued, Francis is not the real last pope “but is simply standing in place for a while for unknown reasons until the real ones steps forward.”

The “last pope,” he said, “will sit on the throne of Peter as a pretender until he is removed and the real Petrus Romanus arrives.”

“Was Francis placed there to accomplish some task? To guide the nations until Petrus Romanus is actually elected?”

Horn also referenced the controversial author Malachi Martin, an Irish Jesuit who left the order in 1964 and began writing a series of novels that advanced the theme of the Third Secret of Fatima. Martin believed the Roman Catholic Church would be destroyed by an internal heresy in which the clergy abandoned God, turned against the Catholic faith and began secretly advancing a diabolic “New World Order” apostasy.

In Martin’s book “The Jesuits,” he described a secret war that was going on behind the scenes in Rome between the Jesuits and the other priests for control of the Vatican, Horn explained.

“Malachi believed if ever the Jesuits took control of Rome that they would use the Catholic Church as a vehicle to usher in the New World Order via Marxism/Socialism/Environmental Law/and the United Nations.”

Noting that Francis is the first Jesuit elected pope, Horn reconsidered the Malachy prediction that suggests the days of the “final pope” are here.

“With the first Jesuit pope, doesn’t it feel as if the Catholic Church is following Malachy’s prediction like a blueprint?” Horn asked.

Horn pointed to passages from his book “Petrus Romanus” that reference early Catholic scholars who believed, as did the modern day Malachi Martin, that Rome would come under control of Satan in the end times and be used by conspirators, which Horn has connected with secret Catholic Freemasons, “to usher in the kingdom of antichrist.”

“This is something about which many modern Catholics are completely unaware,” Horn pointed out. “But there a strong belief that is held by many top Catholic theologians and mystics that the final New World Order apostasy that would bring an end to the Catholic Church would happen in biblical end times,” which Horn believes could be happening today.

Finally, Horn cited the 1907 novel by Robert Hugh Benson, “The Lord of Our World,” which portrays the antichrist who tempts Christians to apostasy before Christ’s Second Coming, culminating in a supernatural war in which the theological deception advanced by Satan seduces Catholics around the world to abandon their faith.

Religious commentators have noted Francis has referred to Benson’s novel many times, suggesting understanding Benson’s dystopian vision is important to understanding the larger themes that “give us the framework to understand Francis’ mindset.”

“Does the pope’s citations of the apocalyptic vision ‘Lord Of The World’ reflect his understanding of the role he has been given?” Horn asks. “We should not discount the common belief among many Catholic leaders of the past regarding ‘the great deception’ that would mislead Christians and provide for the coming of Antichrist – something Pope Francis appears to believe and may see himself as part of.”