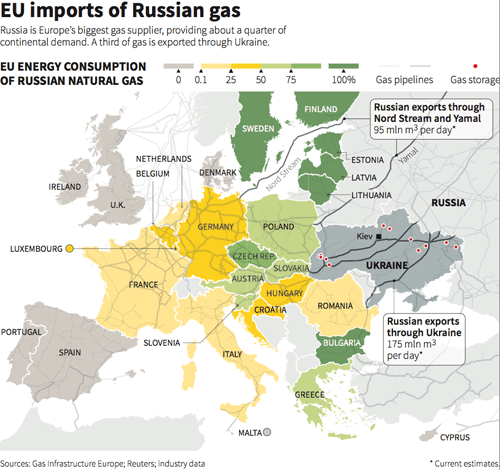 Citing a report in UK’s Daily Mail; Zero Hedge, Infowars and Natural News had reported on natural gas deliveries through the Ukraine being stopped.

Upon further investigation, the story turned out to be inaccurate.

Update/ Correction to this story.

According to the Russian News Agency, TASS, Russia announced that it will stop supplying Europe directly with natural gas via pipelines that transit through Ukraine within three years

The move threatens the European Union’s energy security and may force Europeans to move quickly to wean the continent from its long-standing dependence on Russian gas.

Gazprom’s Chief Executive Officer Alexey Miller says it plans to send 63 billion cubic meters through a proposed link under the Black Sea to Turkey, fully replacing shipments via Ukraine. Europe will be required to make its own arrangements, including building new pipelines, to collect and distribute the gas. [2]

A full agreement has not been reached with Turkey, and construction has not yet begun on the project.

According to Bloomberg, Sefcovic said he was “very surprised” by Miller’s comment, adding that relying on a Turkish route, without Ukraine, won’t fit with the EU’s gas system. “We don’t work like this,” he said. “The trading system and trading habits — how we do it today — are different.” [1]

The 28-nation EU is planning build an energy union to reduce dependence on Russia and facilitate transition to a low-carbon economy. Russia was planning South Stream for about a decade, first claiming it would meet expanding demand in the EU, then saying would ensure supplies from high transit risks via Ukraine. [1]

There are some big moves taking place on the global stage that you need to know about, as this could all lead to World War III.

Yesterday Russia cut off its natural gas supply to Europe, “plunging the continent into an energy crisis ‘within hours’ as a dispute with Ukraine escalated,” reports the Daily Mail. [1]

“This morning, gas companies in Ukraine said that Russia had completely cut off their supply. Six countries reported a complete shut-off of Russian gas shipped via Ukraine today, in a sharp escalation of a struggle over energy that threatens Europe as winter sets in.”

Alternative media warned about this weeks ago

This was all predicted in advance as a move toward World War III. The website All News Pipeline summarizes the predictions which were widely printed across the alternative media weeks ago.

Former U.S. Treasury Secretary Paul Craig Roberts had also warned in advance of a “Black Swan Event” such as Russia cutting off energy supplies to European nations as a prelude to war.

Europe depends heavily on natural gas supplies from Russia which are piped into the region via Ukraine. This is especially true in the winter when gas is needed for heat.

Russia pulls out of the petrodollar

In addition to cutting off natural gas supplies to Europe, Russia has also “just pulled itself out of the petrodollar,” reports Zero Hedge. [2]

The story quotes Bloomberg.com stating that Russia “may unseal its $88 billion Reserve Fund and convert some of its foreign-currency holdings into ruble.”

This is further explained by Mac Slavo at SHTFplan.com who explains, “What we are seeing are the strategic moves that will eventually catalyze the next great war. And make no mistake, this is exactly what’s in store for the world should these escalations continue.”

An escalation into war?

What’s happening here is a radical escalation of the global currency war in which Russia and China are attempting to route the U.S. dollar and ultimately destroy the U.S. empire.

Part of this strategy involves dumping the petrodollar as a global reserve currency and reverting to alternative currencies backed by something more than just hot air. Further evidence of this strategy is found in the explanations on King World News which states that China is moving to back its Yuan currency with gold!

This explains why China has been buying up the world’s physical gold supplies. The U.S., meanwhile, has empty gold vaults and a fiat paper currency backed by nothing but hot air, empty promises and endless debt. The whole world knows this, and nations like Russia are positioning themselves to take advantage of the massive currency collapse that’s eventually coming to the dollar.

Just yesterday, the Swiss franc skyrocketed 30% in mere minutes as the central banks controlling the Euro neared announcing their own massive money printing scheme that would flood the global markets with Euros. As Associated Press wrote, “Bowing to the inevitable, Switzerland has ditched an increasingly expensive policy to limit the export-sapping rise of the Swiss franc — a decision that propelled the currency a whopping 30 percent higher against the euro within minutes.” [3]

Oil prices manipulated as an act of economic warfare

As part of the U.S. effort to wage war on Russia, oil prices have been artificially lowered with the help of the Saudis (who have strong ties to the Bush family and whose royalty was magically evacuated out of the U.S. on private jets during the 9/11 terror attacks) working in conjunction with U.S. forces. The aim is to devastate the Russian economy, harm the Russian currency and even cause damage to Venezuela where food supplies are now wiped out and grocery stores are being guarded by armed government military personnel.

Of course, you won’t hear a word of this from the hypnotic, droning mainstream media which tells you everything is just fine. It isn’t. Massive geopolitical strategies and schemes are being unleashed right now, behind the scenes, and a currency war is under way at the highest levels.

The world, it seems, is fed up with the U.S. abusing its reserve currency status by pumping up the money supply with billions of dollar a month in new fiat money. (Courtesy of the Federal Reserve and its bankster bailouts.) The world is also fed up with the U.S. meddling in international affairs in Ukraine, the Middle East and hundreds of individual nations where the U.S. empire maintains a military occupation of one kind or another.

Right now the Russians are targeting NATO countries with the energy cut-offs, sending a message that any nation which allows its soil to be used by western forces to host missile systems will find its economy crushed by a lack of available energy.

The U.S., meanwhile, has dangerously backed Putin into a corner from which we can only expect an aggressive backlash engineered to protect the national interests of Russia itself.

Remember how the U.S. was drawn into World War II?

You may or may not recall that it was a U.S.-led energy blockage against Japan in the 1940’s that ultimate forced Japan to launch its surprise attack on Pearl Harbor. In a similar pattern, the U.S. and NATO nations are currently forcing devastating economic sanctions onto Russia, driving the nation into a rapidly-dwindling set of defensive options, one of which includes the deployment of nuclear weaponry.

This situation is beyond “serious.” It is at red alert levels, and you need to be monitoring websites like www.SteveQuayle.com to catch the headlines you won’t find in the mainstream media.

Steve Quayle has consistently been decades ahead of everyone else with his predictions on biological weaponry, currency wars and much more. His foresight is so far-reaching, in fact, that it’s almost a curse because a society blinded by the distractions of current affairs will never value the accurate warnings of a man who sees a decade or more into the future. Western culture is far too short-sighted and self-possessed to take seriously the words of a man who warns that the good times buoyed by debt and delusion won’t last forever.

In a world of deceit, all truth-tellers are condemned

Even now, we are living in a time when all truth-tellers are condemned as heretics. Any person quoting accurate economic statistics, for example, is called a “doom and gloomer.” Anyone questioning the sanity of a government that’s $18 trillion in debt and spending wildly on ballooning entitlement programs is labeled “anti-government.” We are living in a time that’s so bizarre, almost everything the average American believes to be true is factually false. The mainstream news is the wool that’s pulled over their eyes to blind them from the truth, to paraphrase The Matrix.

The real truth is that our world is headed straight into unprecedented crisis and conflict. When you wake up tomorrow, realize you are living in the run-up to a collapsed economy that exists in a world where the most powerful nations on the planet have already declared a covert war on the U.S. empire (and can’t wait to bring it down).

The artificially-inflated luxury lifestyle currently experienced by the U.S. population — complete with welfare state entitlement programs — will come to an end for the simple reason that it’s all funded by artificial money creation. That artificial money creation, in turn, is only possible because the dollar is currently the world’s reserve currency, providing a very large money supply base (“buffer”) that insulates America from the more immediate effects of fiat currency creation. But as the world abandons thepetrodollar, the ability of the U.S. to print its way to bigger government, bigger entitlements and bigger debt will utterly collapse.

As Ron Paul recently wrote in a widely-cited column, “A major geopolitical or economic event, greater than the crisis of 2008, is fast approaching. The precipitating event will be a surprise to the majority of politicians and economists. There are many “next shoe to drop” possibilities, and one could happen any time or any place.”

Ron Paul goes on to explain:

The riots to come

Everyone at the highest levels of the U.S. government knows that the current entitlement state debt system is wildly unsustainable. They also know that the day after the EBT cards (food stamps) stop working, every U.S. city will collapse into under chaos and mass rioting.

Although this event could still be years away, its arrival is inevitable. And when it does happen, it will happen suddenly, without warning. That means most people will be completely caught off guard. And when they are caught off guard, they will panic.

I pity the people who do not realize what’s happening on the global stage. All those people obsessed with Hollywood movies, celebrities, fashion and television will be completely taken by surprise when the currency war escalates. They have no idea how close they are to helplessness, hunger and desperation. They have no awareness of reality, no real-world skills and no ability to take care of themselves.

That’s why I recently declared 2015 to be the Year of Self-Reliance. This is the year when it’s becoming increasingly urgent to learn and practice skills for living away from the systems that are subject to failure. This is a time to learn how to augment your current lifestyle with some home food production, water collection and storage, off-grid energy sources, home-based medicine production and more.

Interestingly, many Russians already have these skills, so if economic devastation strikes both the USA and Russia, there’s no question that the Russian citizens will do far better in terms of survival and self-reliance. Russia, even with all its own problems, at least does not criminalize home gardening, fresh cow’s milk and home-produced herbal remedies.