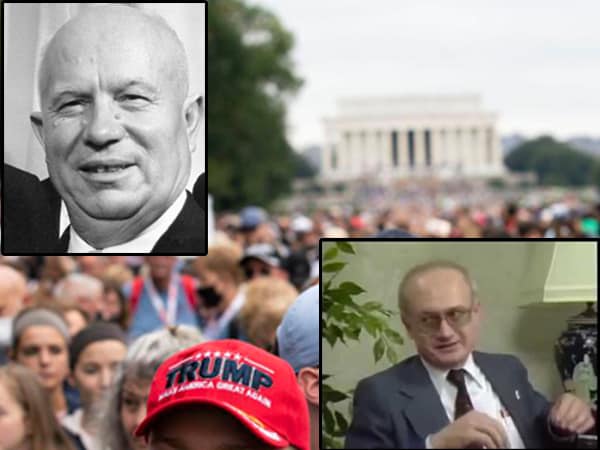 On September 29, 1959, Nikita Khrushchev famously spoke these words at the United Nations;

“Your children’s children will live under communism. You Americans are so gullible. No, you won’t accept communism outright; but, we will keep feeding you small doses of socialism until you will finally wake up and find you already have Communism. We will not have to fight you. We will so weaken your economy, until you will fall like overripe fruit into our hands. The democracy will cease to exist when you take away from those who are willing to work and give to those who would not” – Nikita Khrushchev, UN Speech 9/29/1959

Back in 1959 it seemed unthinkable to a nation that was terrified of the horrors or communism. But in 2020, It’s pretty easy to see the eight levels of control of a Socialist State being achieved:

1) Healthcare – Control healthcare and you control the people

2) Poverty – Increase the poverty level as high as possible, poor people are easier to control and will not fight back if you are providing everything for them.

3) Debt – Increase the debt to an unsustainable level. That way you are able to increase taxes, and this will produce more povert

4) Gun Control – Remove the ability to defend themselves from the government . That way you are able to create a police state.

5) Welfare – Take control of every aspect (food, housing, income) of their lives because that will make them fully dependent on the government.

8) Class Warfare – Divide the people into the wealthy and the poor. Eliminate the middle class. This will cause more discontent and it will be easier to tax the rich with the support of the poor.

How did we get here? Just like the list suggests, the answer to that question is complex. We can look at the Frankfort school’s infiltration of our universities & the education system, Freemasonic influence of all aspects of society: finance; including crisis events created by weather modification, naturalistic science, media… The efforts are myriad, virtually beyond comprehension.

The 4 Stages of Subversion:

𝟏. DEMORALIZATION – Takes up to 20 years to demoralize a nation. Five minutes into this 9 minute video below, Yuri B. nails it. It doesn’t matter how much information you present, it won’t change a person’s perception of reality and they are incapable of digesting truth.

𝟑. CRISIS – It takes up to 6 weeks to bring a nation to the verge of crisis.

𝟒. NORMALIZATION – This is the period we are in. Over the last several months these stages were completed by the Coronavirus Scamdemic, normalizing billions of people into walking around in masks, scared of each other. Telling them what it is all really about is useless. They can no longer hear the truth, as Bezmenov explained;

“Exposure to true information does not matter anymore. A person who is demoralized is unable to assess true information. The facts tell nothing to him. Even if I shower him with information, with authentic proof, with documents, with pictures … even if I take him by force to the Soviet Union and show him concentration camp, he will refuse to believe it until he is going to receive a kick in his fat bottom…” 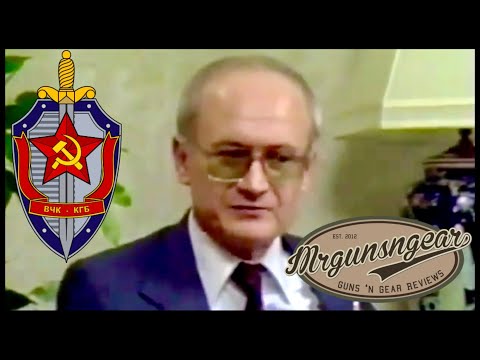 (^this video has a tendency to disappear, so here’s a backup copy\/)

Millions of American Christians (not to mention citizens worldwide) have become aware of the New World Order communist agenda and are rising in opposition against the now unrecognizably extreme far left.  But in their zeal, Christians are joining ranks with false doctrines and even New Age occult spirituality.

“Well, sure, I know Glenn Beck is a Mormon (David Icke is a New Ager, Jonathan Cahn is a Jewish rabbi, Dr. Buttar is a Muslim, the Pope is not Christ on earth…) but he speaks a lot of TRUTH!”

What they don’t realize is that the far left (just like the right) was created to serve a purpose and that its fate is already sealed. As part of his training, Bezmenov said he was taught to ignore leftists, who he described as “useful idiots who are idealistically believing in the beauty of [the] Soviet socialist or Communist or whatever system,” because they are “political prostitutes.”

“They serve [a] purpose only at the stage of destabilization of a nation. For example, your leftists in [the] United States: All these professors and all these beautiful civil rights defenders. They are instrumental in the process of the subversion only to destabilize a nation. When their job is completed, they are not needed any more. They know too much. Some of them, when they get disillusioned, when they see that Marxist-Leninists come to power—obviously they get offended—they think that they will come to power. That will never happen, of course. They will be lined up against the wall and shot.” – Yuri Bezmenov

This is what we are witnessing, not only in America, but worldwide. Yes, it is the “New World Order” of Communist control. But understanding that doesn’t go far enough. The plan is more sinister yet. The rebellion to this takeover, represented by the Zionist/right wing/”truther” community has been orchestrated as well. Seeming to be on the “right side”; praying for America, opposing abortion, standing for liberty and justice for all, the church is joining Ecumenical hands with the doctrines of demons (Vatican, Mystical Rabbis, Mormons, NAR & occult New Age spirituality…).

As evil rears it’s ugly head and millions rise against it, we need to remember that this is a SPIRITUAL battle;

“And do not fear those who kill the body but cannot kill the soul. Rather fear him who can destroy both soul and body in hell.” Matt 10:28


It’s a TRUTH war; scripture tells us that the enemy is loosed to DECEIVE.

“And when the thousand years are ended, Satan will be released from his prison and will come out to deceive the nations that are at the four corners of the earth” – Rev 20:7-8a