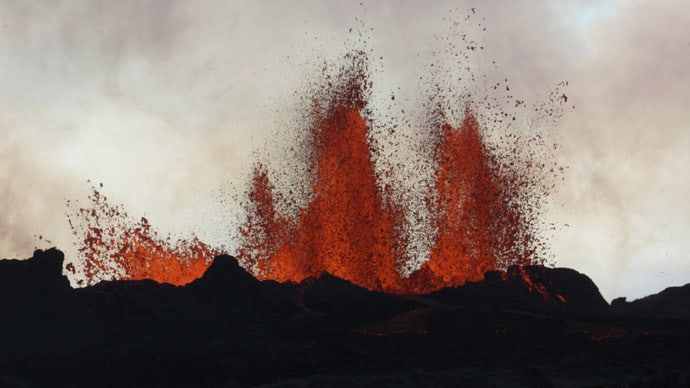 Lava fountains are pictured at the site of a fissure eruption near Iceland’s Bardarbunga volcano September 2, 2014. (Reuters/Armann Hoskuldsson)
A volcanic eruption has created an almost post-apocalyptic landscape in Iceland. Streams of lava are spewing out, reminiscent of Mount Doom in Lord of the Rings. And there is still a significant risk to air traffic, with the current ‘Orange’ warning.

The Orange level, is the second highest on a five-color scale. So far no ash has been visible, but this could change.

Lava fountains rose to around 50 meters on Sunday at the Bardarbunga volcano, which took the aviation warning to red, the highest on the scale. There has been a lot of seismic activity in the area and Einar Heinarsson, a spokesman from Iceland’s department of civil protections says, “The eruption is still going on at the same pace as before. It has been continuous.” 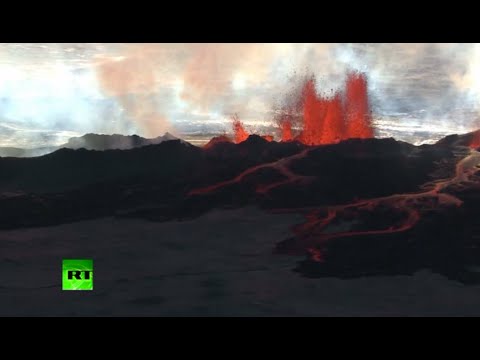 While aviation companies may be worried, the eruptions have certainly created some fantastic photos, with some stupendous scenes visible in the south west of the country. The lava flows on the ground after the Bardabunga volcano erupted again on August 31, 2014. (Reuters/Armann Hoskuldsson)

Heinarsson added that the lava was emerging from a fissure near the volcano. It was now moving towards a river and experts believe there could be some minor gas explosions. The lava is covering an area of 6.2 kilometers, which is the same size as 868 soccer pitches. Picture shows magma along a 1-km-long fissure in a lava field north of the Vatnajokull glacier, which covers part of Bardarbunga volcano system, August 29, 2014. (Reuters/Marco Nescher)

“If the fissure that the lava is flowing from closes, there is a possibility that new ones might open up, possibly closer to the Vatnajokull glacier,” said Kristin Jonsdottir, a geophysicist at the Meteorological Office.

“Therefore, an eruption at Bardarbunga, beneath the glacier, cannot be ruled out,” she said. The lava flows on the ground after the Bardabunga volcano erupted again on August 31, 2014. (Reuters/Armann Hoskuldsson)

Bardarbunga is in the north west of the huge Vatnajokull glacier. The volcano has a dramatic history – about 8,000 years ago it was the source of the world’s largest eruption in the past 10,000 years, spewing out lava that covered 950 square kilometers of land. In contrast the present eruption covers a mere 6.2 square kilometers.

Volcanic eruptions are common in Iceland, which is located in the hot seat of seismic activity – on top of the Atlantic’s mid-oceanic ridge. Lava fountains are pictured at the site of a fissure eruption near Iceland’s Bardarbunga volcano September 2, 2014. (Reuters/Armann Hoskuldsson)

In 2010, a volcano, with the nearly-impossible-to-pronounce name – Eyjafjallajoekull, erupted in the country, producing a giant cloud of ash that severely disrupted air travel, costing airlines millions of dollars.

More than 100,000 flights were canceled due to the eruption and 10 million people were left stranded after aviation officials were forced to close Europe’s air space for five days due to fears the ash could harm jet engines.