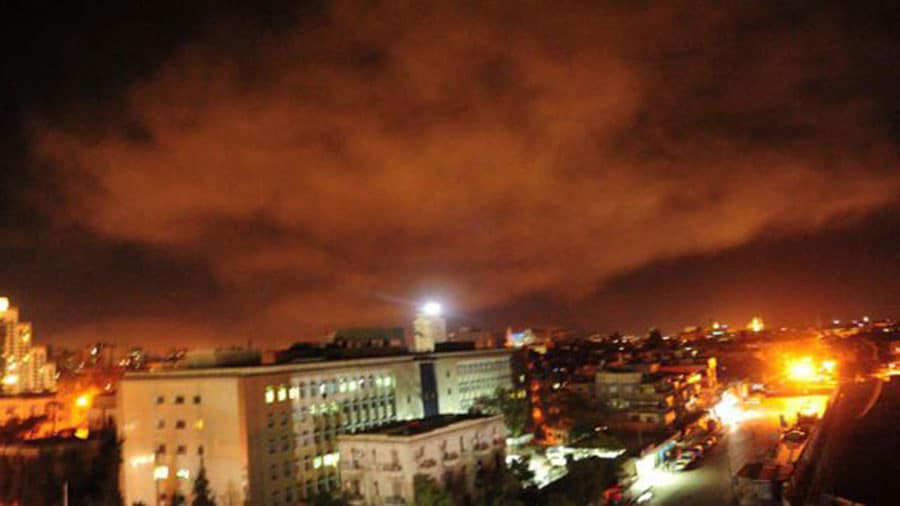 Reuters reports that 105 missiles were launched against Syria overnight in retaliation of the Syrian government use of chemical weapons against its own people. The first videos of the  bombings are coming out on Twitter (below.)

But the official story just doesn’t make any sense. Why would Assad gas his own people?  Why would he want his own regime destroyed?

RT found it more plausible that militant groups in Syria may have goaded the US into striking. A Syrian envoy to the UN said today that the strikes against his country by US and its allies only send signals to terrorists that they can continue with their attacks in Syria and elsewhere.

Syrian envoy: If the coalition knew the location of ‘chemical facilities’ why didn’t they share it with #OPCW? Watch UNSC meeting live here: https://t.co/7WOLxx0DQr pic.twitter.com/xzlTmqTwXr

Did the chemical weapons even exist? Frankly this is sounding a bit like the erroneous search for al-Qaeda and “weapons of mass destruction” after 9/11. And why would Trump defy Russia’s threat to attack the US if it bombs Syria?

Russia vows to shoot down any and all missiles fired at Syria. Get ready Russia, because they will be coming, nice and new and “smart!” You shouldn’t be partners with a Gas Killing Animal who kills his people and enjoys it!

Everything is wrong with this story. Will this launch WWIII? I sure hope not, but we should definitely pray. Phil 4:6-8

The first videos and photos that have emerged on social media show what appear to be the strikes by the US, the UK and French militaries in the Syrian capital.

The Chairman of the United States Army Joint Chiefs of Staff General Joseph Dunford, however, said he was not aware that any missiles were intercepted, adding that the military has yet to assess the operational data. He confirmed that manned aircraft were involved in the airstrikes that hit three facilities in Syria that the US claims are part of its chemical weapons program.

One of the targets was a scientific research center in the greater Damascus area, Dunford said. The second was “a chemical weapons storage facility” in the vicinity of Homs, which, according to Dunford, housed sarin and chemical weapons precursors. The third target was also located near Homs and was identified by the general as a Syrian Army command post and storage facility.

The US military action in Syria was “a one time shot,” US Defence Secretary James Mattis said during a Pentagon press briefing, adding that he doesn’t rule out further action by the US if the Syrian government decides to mount chemical weapons attacks in the future.

The US used about double the number of weapons that US forces deployed during last year’s strike on Shayrat airfield, Mattis said. In that strike, 59 Tomahawk missiles were fired at Al Shayrat airfield in Syria in response to an alleged chemical attack in Idlib province.

Youtuber GodRules published his thoughts on the topic yesterday.