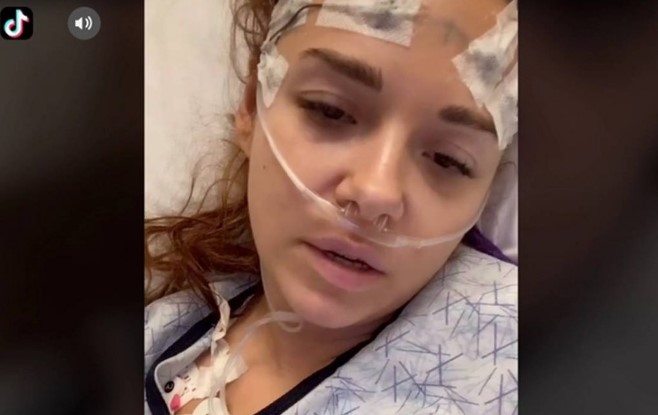 I’ve personally spoken with several health workers now who are painfully aware of the adverse health effects of the COVID-19 vaccinations, but they are not being reported on liberal controlled media nor by authorities. This past week I was in a college Zoom class where the professor began promoting the vaccine as having “numerous safety studies,” ridiculing the “vaccine hesitant” as “conspiracy theorists.” I politely interrupted, pointing out that adverse effects posted on the CDC’s own website (until they stopped reporting them) were not being reported by media, but my mic was quickly muted by the professor.

If the media won’t get this information out, then we have to. Yes, there are many people who have made up their minds and will never hear us. But there are also many who would listen if only they were told the facts. Here are just some of the heartbreaking side effects of this toxic shot.

This young man is from Tennessee.

This girl’s father had to have his arm amputated due to blood clots following being “vaccinated.”

I am seeing far too many of these for it to be a ‘very rare’ side effect.

Gov is lying and covering it up. pic.twitter.com/yZIkgMWW8I

This video was produced by FOX News and has gotten a lot of circulation. How is this being dismissed?

Yes, both sides are being played against each other; two wings, same bird. But I’m posting this information in hopes that it might help even one person resist the pressure to get the “vaccine.”