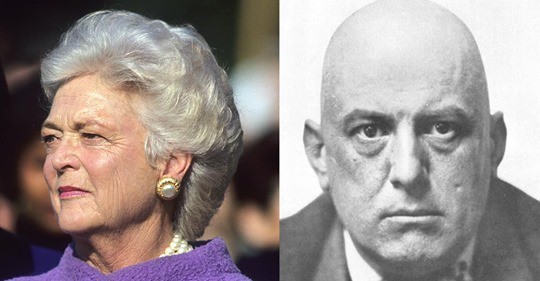 Following up on a line of thought related to Aleister Crowley attempting to Raise Lucifer and of himself dying in Dec, 1947 just before the birth of the Rothchild declared state homeland for the Jews. I came upon this investigation by Jason Louv which is a quite interesting look at Crowleys upbringing and family religious views which helped shape who he became………interesting.

…….So no, Barbara Bush was in all likelihood not Aleister Crowley’s daughter. Which hasn’t stopped people from circulating this rumor as if it were indisputable fact for the last twelve years.

However, just like with most urban legends that take off, there is a deeper mythological resonance to this story—one that nobody has picked up on before.

As I discuss extensively in my new (and now bestselling!) book John Dee and the Empire of Angels, which is about the (hidden) influence of the occult on the last 500 years of Western history, Aleister Crowley was raised in an English extremist religious group called the Exclusive Brethren, lead by a preacher named John Nelson Darby. Darby is the person that invented the concept of the “Rapture,” the idea that people will be literally teleported into heaven during the Second Coming. He made a huge mark on history by claiming that the book of Revelation was literally real, and definitely not, you know, just a metaphor—and even that human beings had to help God’s plan by bringing about the end of the world so that Jesus would come back sooner.

The British, not being particularly impressed by anything this sincere, let alone religious literalism, didn’t take to Darby’s ideas. Aleister Crowley sure did, however, because he spent the rest of his life rebelling against his early cult brainwashing by trying to create his own, “Satanic” version of Darby’s teachings. While Darby declared that a new “aion” was coming, meaning the Second Coming of Christ, the adult Crowley declared himself the prophet of his own “New Aeon,” one that was to be focused on enacting the reign of the Antichrist (meaning Crowley himself, of course), rather than Christ. Somewhere in the back of Crowley’s mind, he probably believed that he was just helping Jesus’ plan along by playing the bad guy in the story.

Another group that took Darby’s ideas quite seriously was, well, American evangelicals. The idea that the Apocalypse is not only literal and just around the corner, but that Christians actually have to help it happen—what I call Turbo-Christianity—circulated throughout the American religious right during the early part of the century, until it became the dominant religious form in America. You can tell because the Left Behind books—the most read books in America—are directly based on Darby’s ideas; and because 1 in 3 Americans now believe that we live in the Apocalypse and that Jesus is coming back in our lifetime (according to a 2006 Pew Forum study). You can also tell because Ronald Reagan took this idea so seriously that he regularly told his aides that he was shepherding the world through the end times, and that his role was to overcome Russia (which he likened to “Gog and Magog” from the apocalyptic Book of Daniel) in preparation for the Second Coming.

George Bush, Jr.—Barbara’s son, of course—believed this too, infamously telling the French President Jacques Chirac that he saw “Gog and Magog at work” in the Middle East when trying to enlist his support for the War on Terror, which (as you can imagine, Jacques being French and all), didn’t go over particularly well. You can also see this dispensationalist theology clearly guiding the hand of Mike Pence, and now John Bolton, who also played a starring role in the invasion of Iraq, and is now working to level Syria (which is also a fulfillment of pre-apocalyptic Biblical prophecy, by the way, from Isaiah 17:1). This is all because evangelical Christians believe that Islam has to be removed from the Holy Land in preparation for Jesus coming back, more or less—and the fact that the evangelical Republicans have been quite regularly trying to force that to happen at the tip of a nuclear warhead should be a lot scarier to you than whatever weird heroin fetish rituals Crowley got up to in his basement.

But the kicker, of course, is that both of these things come from the same place—Crowley’s satanic occultism, and the Republican right’s thermonuclear Middle East interventionism.

So in that case, even if Barbara Bush wasn’t literally Crowley’s daughter, they were both drawing their inspiration from the same place—Darby’s dispensational Christianity. Which at the very least makes them ideological relatives.

Where there’s smoke, they say, there’s fire—whether it’s from an occult ritual or a drone strike.