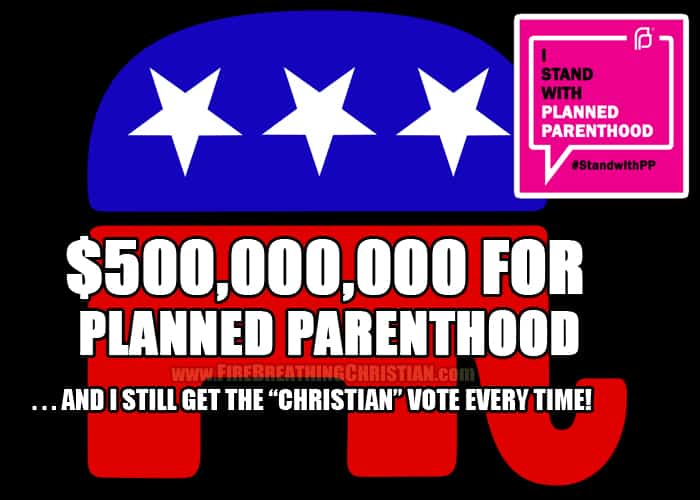 Christians and conservatives who think that the GOP and Donald Trump are pro-life are deluded beyond all remedy. A GOP Congress and White House can’t even defund Planned Parenthood, much less overturn Roe v Wade. Trump’s two years in office now marks a total of six years of a Republican majority in control of the White House and both houses of Congress (four years of GOP control under GW Bush and now two years under Trump), and Roe v Wade still stands as the law of the land, and Planned Parenthood continues to slaughter unborn babies with taxpayer funding.

The Republican-controlled Congress is moving to enact a Defense appropriations bill that has morphed into a multi-agency “minibus” and continuing resolution that funds Planned Parenthood and research that uses fetal tissue taken from aborted babies.

The version of the Labor-HHS-Education bill that was approved by the House Appropriations Committee on July 11—but never brought up for a vote on the House floor—defunded both Planned Parenthood and federal research that uses tissue taken from aborted babies.

The version of the Labor-HHS-Education bill approved by the Senate Appropriations Committee on June 28 permitted funding of Planned Parenthood and research that uses tissue taken from aborted babies.

Sen. Rand Paul (R.-Ky.) fought to get a vote on an amendment to the bill that would defund Planned Parenthood.

Before the Republican leadership agreed to such a vote, Paul needed to go to the floor to speak out about what was happening.

“My amendment would end the funding of Planned Parenthood,” Paul said. “Yet my amendment is now being blocked by Republicans.”

“Big-spending Republicans fear that blocking funding for Planned Parenthood would derail their plans to greatly expand the welfare-warfare state,” he said. “So be it. The public has long known that the Democrats are the abortion party. Now the public will know that many Republicans just pay lip service to pro-life issues and are really more concerned with bloated government spending than with saving lives.”

The seven senators who voted against the bill included six Republicans and Sen. Bernie Sanders (I.-Vt.).

Sen. Mike Lee (R.-Utah), one of the six Republicans, delivered a floor speech explaining his opposition to this bill that funds Planned Parenthood and fetal-tissue research.

“For the second straight year of unified Republican governance—unified pro-life governance—Congress’s annual spending bills will include no new reforms protecting unborn children or getting federal taxpayers out of the abortion business,” said Lee.

“Under this bill,” said Lee, “neither the unborn nor taxpayers are any more protected from the abortion industry than they were under President Obama and a unified Democratic Congress.”

Yesterday the House passed the bill, and for all of Donald Trump’s protestations over taxpayer funding for Planned Parenthood and bloated government spending in general, Trump promised that he will sign this massive spending bill into law.

How long will it take Christians and conservatives to wake up to the fact that the Republican Party in Washington, D.C., is nothing more than controlled opposition? The national GOP is as crooked as a dog’s hind leg. It has been selling itself as a “pro-life” party ever since the U.S. Supreme Court rendered its heinous Roe v Wade decision legalizing abortion-on-demand. But 45 years and 60 million aborted babies later, Roe is still the law of the land. Republicans are so pathetic that they can’t even defund the nation’s largest abortion provider, Planned Parenthood, when they have total control over the entire federal government.

And, incredibly, there are millions of Christians and conservatives who continue to believe that the GOP is pro-life. Is this stupidity, naïveté or what exactly?

Furthermore, pro-life conservatives and Christians are beside themselves with glee over Trump’s appointment of Brett Kavanaugh to the Supreme Court. They seem to be convinced that Kavanaugh is going to tip the scales on the High Court and finally overturn Roe v Wade. It is pure fantasy.

In the first place, the idea that only the Supreme Court can overturn Roe only serves to reinforce the fallacious and unconstitutional doctrine of judicial supremacy. And, secondly, there is absolutely nothing in Kavanaugh’s record to suggest that he will vote to overturn Roe—all of the left-wing hysteria over the idea that he will notwithstanding.

Phillip Jauregui of the Judicial Action Group warned that Kavanaugh is not “constitutionally principled.” That’s an understatement.

Not only is Kavanaugh neck-deep in his complicity to cover up the murder of Clinton Deputy White House Counsel Vince Foster, he has a judicial track record as being a loathsome toady for the Police State. Judge Andrew Napolitano is trying to warn conservatives that Kavanaugh is an “enemy of the Fourth Amendment.”

In a discussion on natural law, Napolitano noted that Judge Kavanaugh had established a record of supporting government surveillance on Americans, even when there was not probable cause to believe a crime was being committed.

Kavanaugh’s support for abuse of government power in this case, has been buttressed by the Patriot Act, one of the most anti-Fourth-Amendment pieces of legislation passed in recent decades.

Napolitano goes on to outline the many ways the Patriot Act violates the natural rights behind the Fourth Amendment, concluding:

“What young lawyer was the scrivener when they were putting together the Patriot Act?”

It was, of course, Brett Kavanaugh.

People who are putting their faith in Brett Kavanaugh to uphold the Natural rights of man codified in our Declaration of Independence and Bill of Rights—including the right to life—are in for a rude awakening.

Again, if Donald Trump and the Republicans in Congress truly wanted to overturn Roe v Wade and put a stop to legalized abortion-on-demand, they could have already done it.

Do you really believe that a Republican President and Congress that haven’t been able to even defund Planned Parenthood for two years (make it six, if you include the years under Bush and Trump) are going to overturn Roe v Wade? You really aren’t that naïve, are you?

Of course, the other war being waged by both Democrats and Republicans in Washington, D.C., (including Donald Trump) is the war on the Constitution.

P.S. The other thing that both parties in Washington, D.C., have in common is their blind support for the Zionist State of Israel. And, in this regard, Donald Trump is the leader of the pack.

Christian teaching in support of Zionist Israel is one of the greatest deceptions in Church history. No country is more rabidly pro-abortion than Israel. The State of Israel pays for a woman’s abortion up to the very moment of delivery—regardless of the reason. Zionists are among the most radical pro-abortion people in the world. In fact, many of the radical left-wing pro-abortion groups in the United States are comprised heavily of Zionists. Those who call themselves pro-life and pro-Israel at the same time are truly among the most deluded people on earth.

I urge readers to get the 15-message series on the truth of Israel that I recently delivered.

We have put all 15 messages into a 7-DVD set called The Israel Package.

If purchased separately, these 15 messages would cost $95. But The Israel Package, including 7 DVDs containing all 15 messages, costs only $30. Basically, we are offering 15 messages for the price of 2. Plus, the DVDs come in a beautiful hard plastic case that will compliment any library or coffee table. And the price is affordable enough that sets can be purchased for friends and loved ones.

As I said, this package includes 7 DVDs containing 15 messages, including:

*“The Children Of Promise”

*I Will Curse Them That Bless Thee

I am convinced that the Israel deception is to a great extent responsible for America’s rapid descent into the moral, cultural and political upheaval (including the abortion upheaval that has claimed the lives of over 60 million unborn babies) taking place in our country. The Israel deception has blinded the vast majority of evangelical pastors and churches and during the past 70 years has brought our country to the brink of ruination. I am further convinced that if our pastors and churches could be delivered from the Israel deception, it could bring a great national healing to our country. [emph CO]

I urge readers to take advantage of this limited-time offer and order The Israel Package: 7 DVDs containing 15 messages on the truth about Israel for only $30.