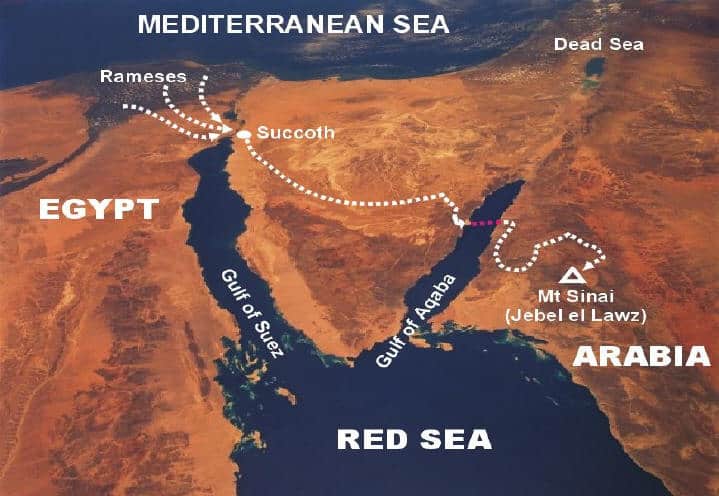 Jim and Penny Caldwell lived with their children Lucas & Chelsea inside the Kingdom of Saudi Arabia for 12 years where Jim was employed in the oil and gas industry. With a residence in the Eastern Province on the Persian Gulf, they were afforded the opportunity to travel extensively throughout the Middle East. After a month’s long driving excursion to Egypt and a very disappointing visit to the traditional Mount Sinai at St. Katherine’s on the Sinai Peninsula, they made a rare discovery that sparked the idea that the real mount was actually to be found in the northwest corner of Saudi Arabia. After setting their compass to a particular mountain called Jebel al Lawz, the Caldwell’s returned to Arabia where they finally located the mountain of their objective.

Since January of 1992, Jim and Penny made fifteen trips out into the regions surrounding Jebel al Lawz. Though they had to remain anonymous at the time, it was their secret research and evidence that began filtering out into books, videos, and internet websites all throughout the 1990’s. Backpacking their way into restricted areas and behind forbidden fences which at times led to arrest at gunpoint, their knowledge of the lay of the land is perhaps better than any. Their accomplishments include arduous climbs to the top of both of the highest peaks in the region, Jebel Maqla and Jebel Lawz, which they believe to be Mt. Sinai and Mt. Horeb, respectively. Among their personal discoveries are the Split Rock at Horeb, the footprint rock carvings believed to be related to the children of Israel, the graveyard at Sinai, a bitter spring fountain head they believe to be Marah, and a desert oasis with twelve wells that appears to be the Biblical Elim. Beside these, the Caldwell’s have discovered and filmed flocks of quail, groves of almond trees, and a very interesting candidate for the burning bush. From scuba diving in the Gulf of Aqaba on numerous occasions to quite literally traversing the Saudi Kingdom in its entirety in an effort to trace the pathway of what they theorize to be a deep southern Israeli wandering, the Caldwell’s have a particularly unique perspective on the Exodus and its application to the Arabian Peninsula. Having completed their first book, “The God of the Mountain”, two more are in the works along with various film projects that will detail heretofore unreleased and startling possibilities surrounding the consequences of placing Mt. Sinai in Arabia.

Much of the information about this topic that can be found on the web as well as multi-media formats originated from the Caldwell’s. A number of their first time discoveries have been attributed to others because of the confidential nature of their work while they were still inside Arabia.

The Caldwell’s photographs and video have literally been shown around the world, and their original ideas and documentation have become the subject of much debate and controversy alike. Since returning to the USA, they formed the Split Rock Research Foundation, and continue to work with scholars and scientists from around the world on the topic of Sinai in Arabia.