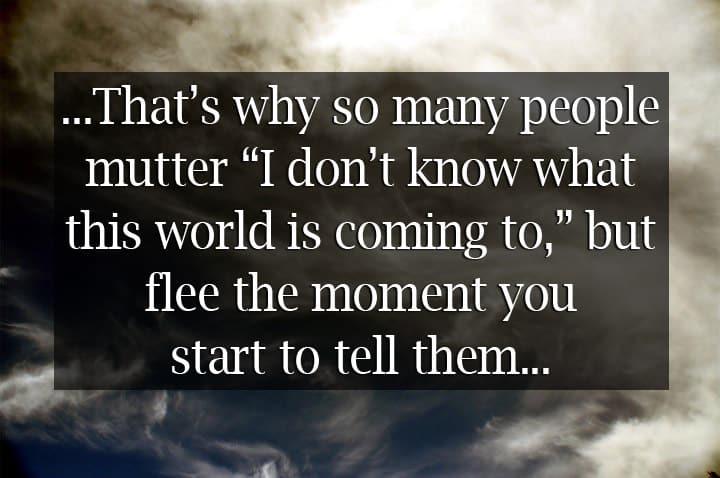 From time to time, it is good to take a step back from all the minutiae and historical details and current events relative to Bible prophecy, and reconsider the awesomeness of Big Picture overall.

For two millennia, the faithful have kept watch, looking hopefully for signs that indicated that they might be among the generation whose time would see the coming of the Lord.

For the generation actually living in the times of the signs, there are so many signs to juggle that they almost become routine. There is yet another old saying to the effect that “familiarity breeds contempt.”

“Contempt” is too strong a word to apply here, except in the sense that when the miraculous becomes commonplace, it becomes somewhat less awe-inspiring, somehow.

We are living eyewitnesses to events for which the ancient prophets had no words, but somehow managed to describe in symbols decipherable only to one generation, somewhere in time.

The prophet Daniel was so confused by what he had witnessed, and so unsure of how to describe it adequately, that he actually complained to God’s Messenger about it:

“And I heard, but I understood not: then said I, O my Lord, what shall be the end of these things?”

Just try and see it from Daniel’s perspective. He had just absorbed a vision of Israel’s future, divided into seventy weeks of years.

God revealed to Daniel the rise and fall of four successive world empires; Babylon, Medo-Persia, Greece, and Rome. Much of Daniel’s vision would have been somewhat familiar; the mechanics of government and technology of war didn’t change that much from the 5th century BC to the 1st century AD.

But Daniel’s vision took a hard right turn following the ‘cutting off of the Messiah’ (Daniel 9:26) and jumped from the middle of the 1st century to somewhere in the 21st century.

Daniel was transported from the destruction of Jerusalem by Titus in 70 AD to the confirmation of the seven year treaty by the antichrist and the start of the Tribulation Period — Daniel’s 70th Week.

Daniel had seen things that staggered him so much he didn’t know where to begin.

There is a principle in Scripture that dictates that God does not repeat Himself unnecessarily. If God tells you something twice, it’s because it is so important that He really, really wants you to get it.

That is the case here. Earlier, Daniel had voiced a similar complaint, and the angel had already told him:

As I said, this is something important enough for God to tell us twice. The events that so perplexed the prophets, even Daniel, who was so in tune with the Mind of God that he could divine dreams, would remain a mystery to every generation except the one that would see its fulfillment.

Every generation since Christ has watched for the signs of the times pointing to His return.

The Church at Thessalonika, for example, was so convinced that the Lord had come and they’d been left behind that Paul wrote his 2nd Epistle to the Thessalonians specifically to reassure them. (2nd Thessalonians 2:1)

But the angel told Daniel that the Signs of the Times would only be understandable during the Times of the Signs.

There is a world of difference between ‘knowledge’ and ‘wisdom’. One can have great wisdom without much knowledge. Some of the wisest men I ever knew had little or no education.

And it is equally true that one can have a tremendous amount of knowledge and be utterly devoid of wisdom. The bookstores (and universities) are crammed with examples of Ph.D’s who have dedicated their careers to proving that proposition.

Wisdom and knowledge are but two components of understanding and in context, it was ‘understanding’ that Daniel was seeking from the revealing angel. Indeed, the angel went on to say;

The Proverbs of Solomon explain ‘understanding’ as an equation that could be expressed this way: “wisdom plus knowledge equals understanding.”

“The fear of the LORD is the beginning of wisdom: and the knowledge of the holy is understanding.” (Proverbs 9:10)

That is the whole purpose of the Proverbs;

“To know wisdom and instruction; to perceive the words of understanding.” (Proverbs 1:2)

Daniel had wisdom, but the kaleidoscope of images from our time imparted no useful knowledge, so he therefore had no understanding of what he had just witnessed.

It began when, for the first time since the times of Daniel, there is, in this generation, a political and national entity called “Israel” composed of Daniel’s people and living in Daniel’s city. (Daniel 9:24)

From the day that Israel was reborn (shall a nation be born at once? for as soon as Zion travailed, she brought forth her children. (Isaiah 66:8) on 14 May 1948, the countdown clock began ticking down.

One needn’t turn to Matthew 24’s ‘fig tree’ analogy to make that point. The point makes itself. Virtually every major component of Bible Prophecy’s Big Picture traces its genesis to the same point in modern history.

The same 1948 restoration of Israel is also the seminal event responsible for the current war on Islamic terrorism.

Daniel’s antichrist is a prince of the people who destroyed Jerusalem and burned the Temple. (Daniel 9:27).

The current East/West geopolitical alignment in the Middle East is a direct result of the US/Soviet Cold War which officially kicked off with the 1948 Berlin Airlift.

The first Constitution for a global government, the Universal Declaration of Rights and Freedoms was ratified by the UN Member States in 1948.

The General Agreement on Tariffs and Trade (GATT) Treaty establishing global economic policy rules (and ultimately evolving into the World Trade Organization) was signed and ratified by the UN in 1948.

The World Council of Churches was established under UN auspices in Amsterdam in August, 1948.

China and Taiwan were divided by the 1947-1948 Communist takeover of the mainland, giving birth to the inscrutable People’s Republic of China.

All that is history, and therefore, common knowledge. But devoid of ‘wisdom’ (i.e., that it is evidence of the soon fulfillment God’s Plan for the Ages) the world can’t understand the Big Picture for what it is.

What they see instead is chaos and terror and war and upheaval and, more than anything, fear. That’s why so many people mutter “I don’t know what this world is coming to,” but flee the moment you start to tell them.

It is discouraging to wear the label of ‘prophecy nut’.

(But Noah preached for 120 years without a convert — now that is discouraging.)

So I think it is good to step back once in a while and drink in the awesomeness of the events to which we are now almost daily witnesses.

Our individual setbacks pale in comparison to the awesomeness of witnessing of the Hand of God directly interacting in our world to fulfill His Word in our generation.

If that isn’t encouraging, I don’t know what is.

Paul tells us of a special crown, the ‘crown of righteousness’ that is reserved in heaven,

Titus 2:13 says that, believers with understanding aren’t quaking in fear “at looking at the things that are coming upon the earth,” but that, instead, they are;

“Looking for that blessed hope, and the glorious appearing of the great God and our Saviour Jesus Christ.” (Titus 2:13)

Looking at the signs of the times is terrifying. Understanding the times of the signs means a ‘crown of righteousness’ and represents our ‘blessed hope’– the soon Rapture of the Church.

Still, is natural to feel a sense of fear. After all, we all want to go to heaven, but none of us is eager to hasten the process by dying. Being afraid once in a while is not evidence of a lack of faith.

Paul explains that we are dual-natured creatures, part carnal and part spiritual, so it is not disloyal (or schizophrenic) to be afraid with the natural part and overjoyed at its spiritual implications.

That is what ‘understanding’ is all about.

“That the trial of your faith, being much more precious than of gold that perisheth, though it be tried with fire, might be found unto praise and honour and glory at the appearing of Jesus Christ.” (1st Peter 1:7)