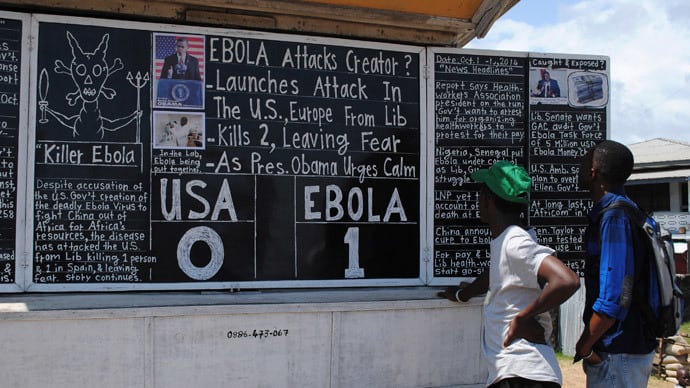 High Government Official In Germany Seeks Washington’s Reassurance that the US DID NOT WEAPONIZE the Species of Ebola which Germany Made Available to Washington.

Washington has not provided the reassurance.

The arrogance and inhumanity of Washington is beyond comprehension.

The United States has withheld assurances from Germany that the Ebola virus – among other related diseases – would not be weaponized in the event of Germany exporting it to the US Army Medical Research Institute for Infectious Diseases.

Germany subsequently made two follow-up requests and clarifications to the Army, according to the unclassified Wikileaks cable.

”This matter concerns the complete genome of viruses such as the Zaire Ebola virus, the Lake Victoria Marburg virus, the Machupo virus and the Lassa virus, which are absolutely among the most dangerous pathogens in the world,” the request notes.

“The delivery would place the recipient in the position of being able to create replicating recombinant infectious species of these viruses,” the cable notes.

However, it also points out that Germany has in place an “exceptionally restrictive policy,” adding that approval would not be granted to the export until US assurance was provided.

”A decision about the export has not yet been made. Given the foregoing, we would appreciate confirmation that the end use certificate really is from the Department of the Army and of the accuracy of the data contained therein,” the document stated.

There is no follow-up document available to confirm whether the US Army eventually provided Germany with the necessary guarantees.   Bioweapons were outlawed in the Biological Weapons Convention of 1972 and was signed and ratified by 179 signatories, including Germany, the US and Russia.

It dictates that signatories, “under all circumstances the use of bacteriological (biological) and toxin weapons is effectively prohibited by the Convention” and “the determination of States parties to condemn any use of biological agents or toxins other than for peaceful purposes, by anyone at any time.”