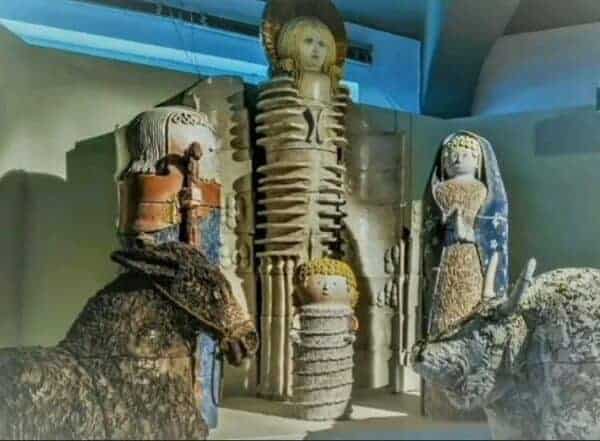 Only in 2020. Check out this year’s Vatican “Nativity Scene.” They aren’t even trying to hide it anymore. 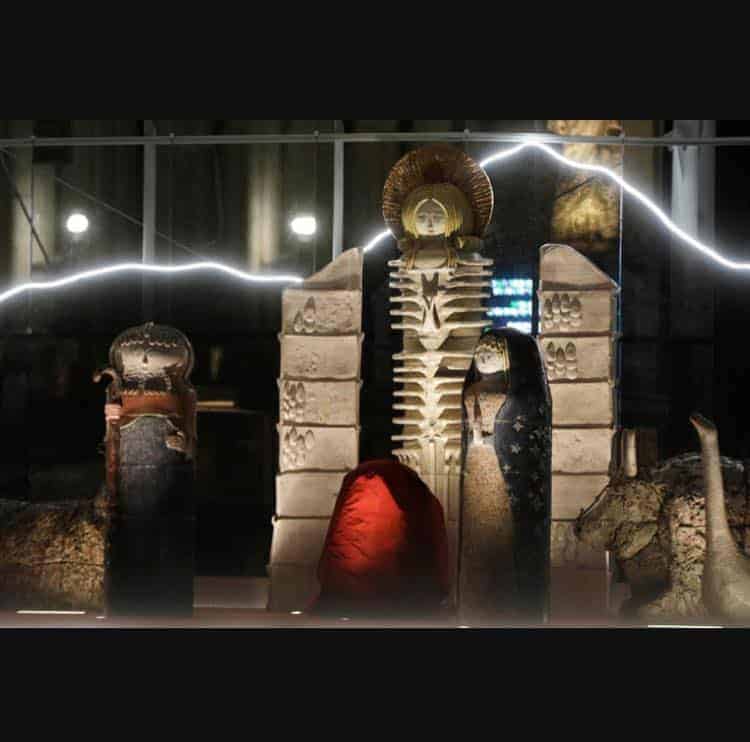 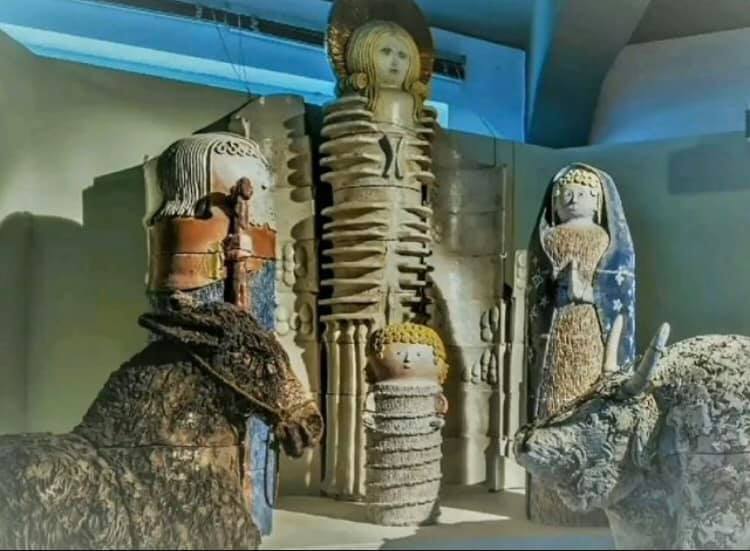 Mary looks like a Djed pillar. The Djed is a pillar-like symbol in Egyptian hieroglyphs representing stability. It is associated with the creator god Ptah and Osiris, the Egyptian god of the afterlife, the underworld and the dead and is used in the Resurrection of Osiris ritual. hmmm…

Here’s a video about The Secret of the Djed Pillar: 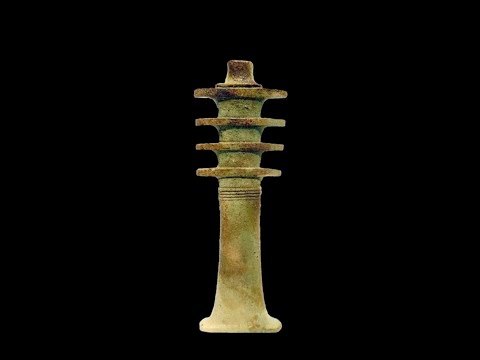 Sue Gutierrez noticed the similarity between this depiction of Mary and the Iron Maiden. 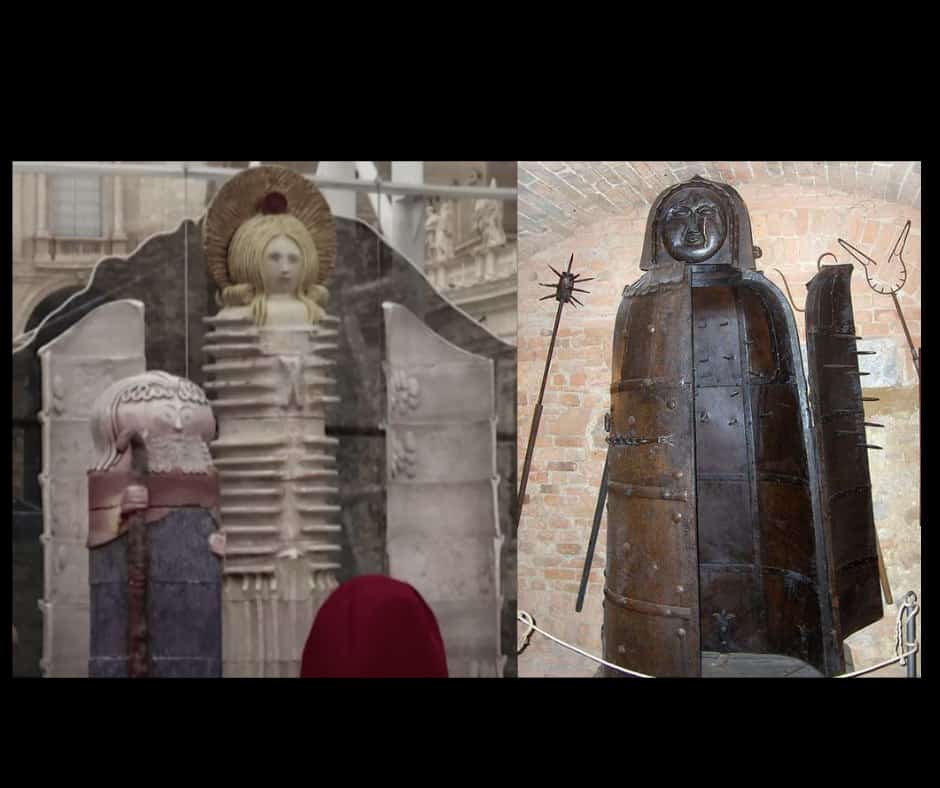 The nativity features an astronaut holding the moon. What on earth? 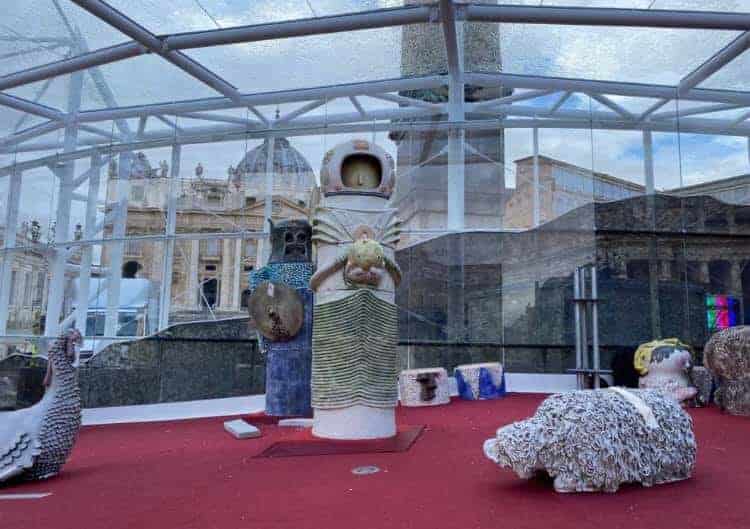 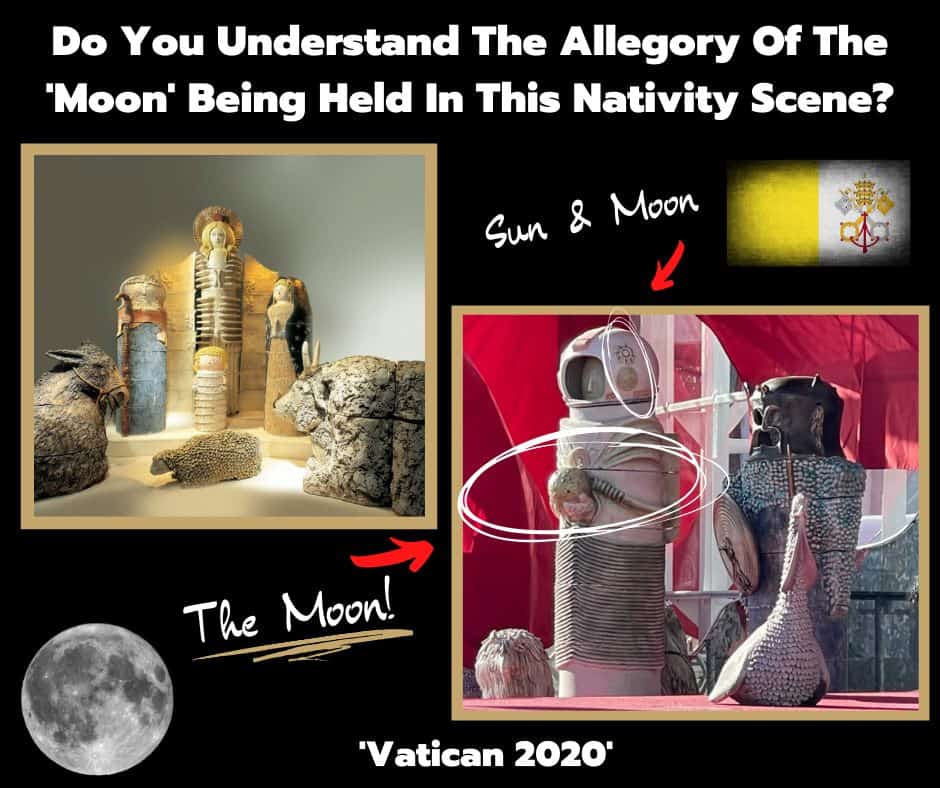 Here’s what Cheryl Devine Tuumalo wrote about that –

“You have to keep watch with Spiritual eyes. Don’t miss this! The Vatican approved of every piece of this Nativity scene, the Pope has to sign off on this. While everyone is mocking this and complaining about how hideous it is, they are missing it.

This is the allegory of the sun and the moon, this is all symbolic. The Vatican believes that the ‘Pope’ is like the ‘Sun’, the ‘Spiritual Authority’, and the only source of light, and the ‘Moon’ was/is like the ‘Emperor’, the ‘Secular/Civil’ Authority aka ‘Temporal’/Worldly Power. And the ‘Moon’ which only reflects light, and has no value without the sun’s light. This is what they believe now. And you can read through the Letter of Pope Innocent III to re-affirm this. I’ll leave that in the comments for you.

And remember, this is also true with the Vatican Flag, the two keys are to represent, ‘Gold’ Spiritual power and ‘Silver’ Civil power. Thus the colors of the Flag, half the Flag ‘Yellow’ for the ‘Sun and half ‘White’ for the ‘Moon’.

The Vatican does not believe in the True Messiah of the Bible, they pretend to. But people are missing what satan is putting right in front of you.
The holding the Moon in the hands, is showing control over the ‘Secular/Civil’ aka Temporal Power. For a ‘Global Vatican Power’ that is not only Spiritual but Secular. Thus why we have the celestial sign on December 21st taking place. But that is for another post, hopefully this week.

Take a look at this excerpt form an MSN article…
“Mary, Joseph and… an astronaut? Vatican’s 2020 nativity scene mocked”

“Tommy Tighe, author of “The Catholic Hipster Handbook,” praised the display on Twitter. “You can’t be like ‘one reason Catholicism rules is because it’s weird’ and then not love the Vatican nativity scene ESPECIALLY THE ASTRONAUT,” he wrote. And Lino Rulli, host of “The Catholic Guy Show” on radio, was even more effusive. “I don’t know what I love more: the spaceman or the guy from the Star Wars Cantina,” tweeted Rulli. “I really want a small one for our home.” -MSN

See how they are also bringing some attention to the astronaut through the mocking.

“Praised be You my Lord with all Your creatures, especially Sir Brother Sun, Who is the day through whom You give us light. And he is beautiful and radiant with great splendor, Of You Most High, he bears the likeness. Praised be You, my Lord, through Sister Moon and the stars, In the heavens you have made them bright, precious and fair.”

And remember, Francis of Assisi is credited with creating the first nativity scene back in 1223!

The Father made the Sun, Moon and the Stars for SIGNS as well as for seasons…

“And God said, Let there be lights in the firmament of the heaven to divide the day from the night; and let them be for signs, and for seasons, and for days, and years:” Genesis 1:14

And we know that satan will take them and use them as well.

This is what the Father has to say about about that….

“He did away with the idolatrous priests whom the kings of Judah had appointed to burn incense in the high places in the cities of Judah and in the surrounding area of Jerusalem, also those who burned incense to Baal, to the sun and to the moon and to the constellations and to all the host of heaven.” 2 Kings 23:5 Deuteronomy 17:2-5 Deuteronomy 4:19

All this is yet another example of why it’s so important for Christians to be aware of the Babylonian/Egyptian mystery school religion and their symbolism. Most don’t even know what this is, and would just think it’s “strange”, “kind of space-age”, “artistic”… or maybe simply lacking reverence and taste… It is SO much more!