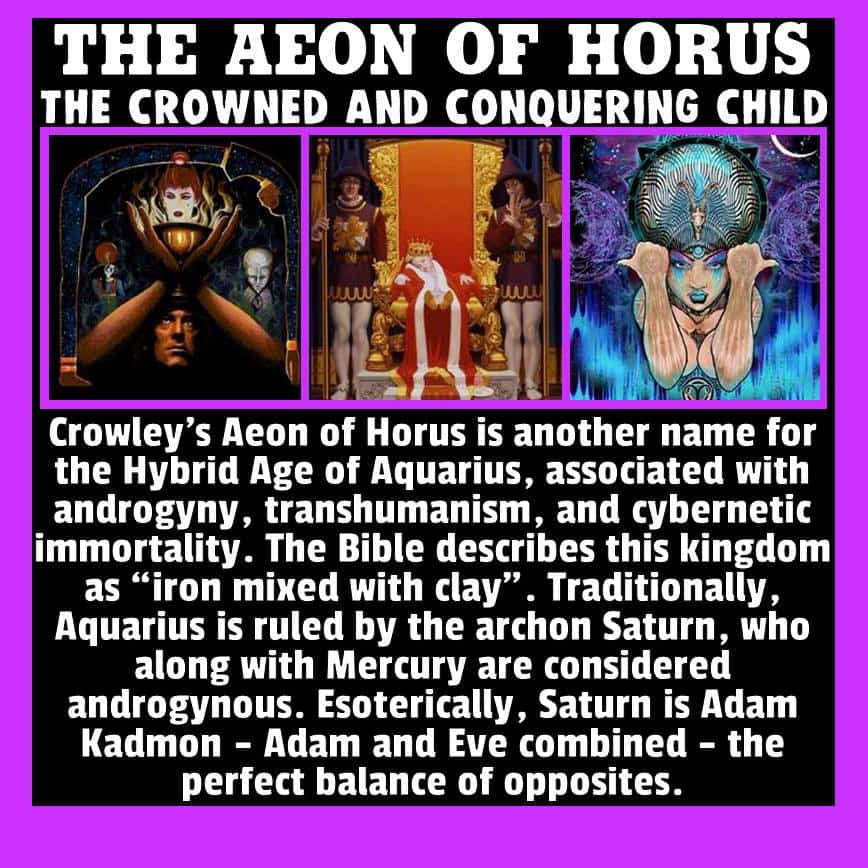 We are living on the cusp of what Crowley called the Aeon of Horus. In Egyptian mythos, Horus was the divine child of Isis and Osiris. In this New Aeon, the androgynous child Horus is crowned, which supplants the former epochs of the Matriarch (Taurus) and the Patriarch (Aries and Pisces).

Since the sexual revolution of the 1960s, we have seen a drastic shift in moral values. Strong families are becoming rare, marriages are failing, courtship is dead, and people have abandoned traditional sex, for all kinds of exotic fetishes, virtual stimulation, and the latest trend—sex with dolls and robots.
There is an occult agenda, to make man into the image of the Beast – the androgynous Baphomet. The distinction between genders is being blurred. Men are losing their testosterone through chemical warfare, while women have lost touch with their feminine qualities. Transgender activists have even promoted the idea that “some women have penises” and men can menstruate”.

The symbol of Horus is the little baby cherub. Anytime you see this icon it doesn’t represent LOVE, but Horus and this Aeon of sexual depravity. The pedophilia epidemic today, is the manifestation of this occult agenda to reshape children’s sexuality. And this is not a 21st-century idea, as pagan philosophers believed that the perfect state of man is to be androgynous. Even the famous portrait of the Mona Lisa, by esoterically inspired Leonardo da Vinci, is a hermaphrodite – the blending of a man and a woman. The word “hermaphrodite” is a combination of the god Hermes and the goddess Aphrodite. This is also why Jesus Christ is often depicted with feminine qualities, as it represents the god Horus.

Ultimately, the end game is to make a new race of man, called post-human H+. This symbol also happens to be the glyph of Saturn, again representing the androgynous Adam Kadmon. Nietzsche referred to this superior being as the overman, who practiced master morality, a morality of his own imagination.

Whether you like it or not, we are at the dawn of the enthronement of Horus, who is arrayed in purple, the color of not only royalty but of androgyny, as it’s a blend of red (feminine) and blue (masculine). This is also called the Age of Aquarius/ Leo that is – the Novus ordo seclorum!