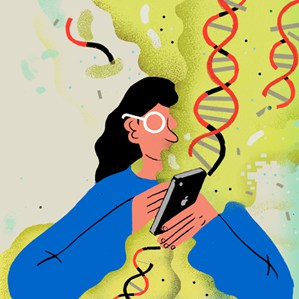 “Apple is collaborating with U.S. researchers to launch apps that would offer some iPhone owners the chance to get their DNA tested, many of them for the first time, according to people familiar with the plans.” – Antonio Regalado | MIT

Why does Apple want your DNA?(1) Why does Google want to store your genomes?(2) Why is the US planning a DNA study of a million people?(3) They say that it is all to “study diseases”. But in my opinion, that’s just a front. I think there’s ample evidence to indicate that, like Hitler, what they are really trying to do is to create an “Ubermensch” (Superman) – again pointing to the Transhumanist agenda. Which once again brings to mind the manipulation of man’s DNA alluded to in Genesis 6 which produced a hybrid race of giants that dominated the anti-deluvian world. Many believe that this corruption of DNA was the reason that God needed to destroy the world with the global flood of Noah’s time. Had it been allowed to continue, eventually all flesh would have become corrupt, including the line through which the savior of mankind, Jesus, the “second Adam” would come.

In conjunction with the SRA and MPD “Super Soldiers” being created, we begin to make out an agenda, not only to create a great chaos and completely control mankind, but ultimately to build up for the great battle against the King of Kings upon His return.

It’s hard to imagine, but scripture tells us that Satan plans to win the war against God:

“And I saw the beast, and the kings of the earth, and their armies, gathered together to make war against him that sat on the horse, and against his army.” – Revelation 19:19

“Why do the nations rage and the peoples plot in vain?
The kings of the earth set themselves, and the rulers take counsel together,
against the Lord and against his Anointed, saying,
“Let us burst their bonds apart and cast away their cords from us.”
He who sits in the heavens laughs; the Lord holds them in derision.
Then he will speak to them in his wrath, and terrify them in his fury, saying,
“As for me, I have set my King on Zion, my holy hill.” – Psalm 2:1

Below are the three articles I’m referring to:

Apple Has Plans for Your DNA – 1

The iPhone could become a new tool in genetic studies.

Of all the rumors ever to swirl around the world’s most valuable company, this may be the first that could involve spitting in a plastic cup.

Apple is collaborating with U.S. researchers to launch apps that would offer some iPhone owners the chance to get their DNA tested, many of them for the first time, according to people familiar with the plans.

The apps are based on ResearchKit, a software platform Apple introduced in March that helps hospitals or scientists run medical studies on iPhones by collecting data from the devices’ sensors or through surveys.

The first five ResearchKit apps, including one called mPower that tracks symptoms of Parkinson’s disease, quickly recruited thousands of participants in a few days, demonstrating the reach of Apple’s platform.

“Apple launched ResearchKit and got a fantastic response. The obvious next thing is to collect DNA,” says Gholson Lyon, a geneticist at Cold Spring Harbor Laboratory, who isn’t involved with the studies.

Nudging iPhone owners to submit DNA samples to researchers would thrust Apple’s devices into the center of a widening battle for genetic information. Universities, large technology companies like Google (see “Google Wants to Store Your Genome”), direct-to-consumer labs, and even the U.S. government (see “U.S. to Develop DNA Study of One Million People”) are all trying to amass mega-databases of gene information to uncover clues about the causes of disease (see “Internet of DNA”).

In two initial studies planned, Apple isn’t going to directly collect or test DNA itself. That will be done by academic partners. The data would be maintained by scientists in a computing cloud, but certain findings could appear directly on consumers’ iPhones as well. Eventually, it’s even possible consumers might swipe to share “my genes” as easily as they do their location.

An Apple spokeswoman declined to comment. But one person with knowledge of the plans said the company’s eventual aim is to “enable the individual to show and share” DNA information with different recipients, including organizers of scientific studies. This person, like others with knowledge of the research, spoke on condition of anonymity because of the company’s insistence on secrecy. read more….. 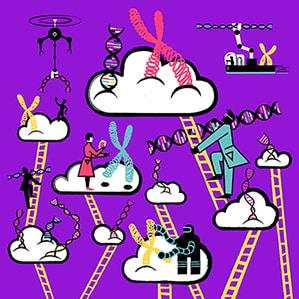 Google Wants to Store Your Genome – 2

For $25 a year, Google will keep a copy of any genome in the cloud.

Google is approaching hospitals and universities with a new pitch. Have genomes? Store them with us.

The search giant’s first product for the DNA age is Google Genomics, a cloud computing service that it launched last March but went mostly unnoticed amid a barrage of high profile R&D announcements from Google, like one late last month about a far-fetched plan to battle cancer with nanoparticles (see “Can Google Use Nanoparticles to Search for Cancer?”).

Google Genomics could prove more significant than any of these moonshots. Connecting and comparing genomes by the thousands, and soon by the millions, is what’s going to propel medical discoveries for the next decade. The question of who will store the data is already a point of growing competition between Amazon, Google, IBM, and Microsoft.

Google began work on Google Genomics 18 months ago, meeting with scientists and building an interface, or API, that lets them move DNA data into its server farms and do experiments there using the same database technology that indexes the Web and tracks billions of Internet users.

“We saw biologists moving from studying one genome at a time to studying millions,” says David Glazer, the software engineer who led the effort and was previously head of platform engineering for Google+, the social network. “The opportunity is how to apply breakthroughs in data technology to help with this transition.” read more…

President Barack Obama is proposing to spend $215 million on a “precision medicine” initiative the centerpiece of which will be a national study involving the health records and DNA of one million volunteers, administration officials said yesterday.Precision medicine refers to treatments tailored to a person’s genetic profile, an idea already transforming how doctors fight cancer and some rare diseases.The Obama plan, including support for studies of cancer and rare disease, is part of a shift away from “one-size-fits-all” medicine, Jo Handelsman, associate director for the White House Office of Science and Technology Policy, said in a briefing yesterday. She called precision medicine “a game changer that holds the potential to revolutionize how we approach health in this country and around the world.”

The White House said the largest part of the money, $130 million, would go to the National Institutes of Health in order to create a population-scale study of how peoples’ genes, environment, and lifestyle affect their health. read more…