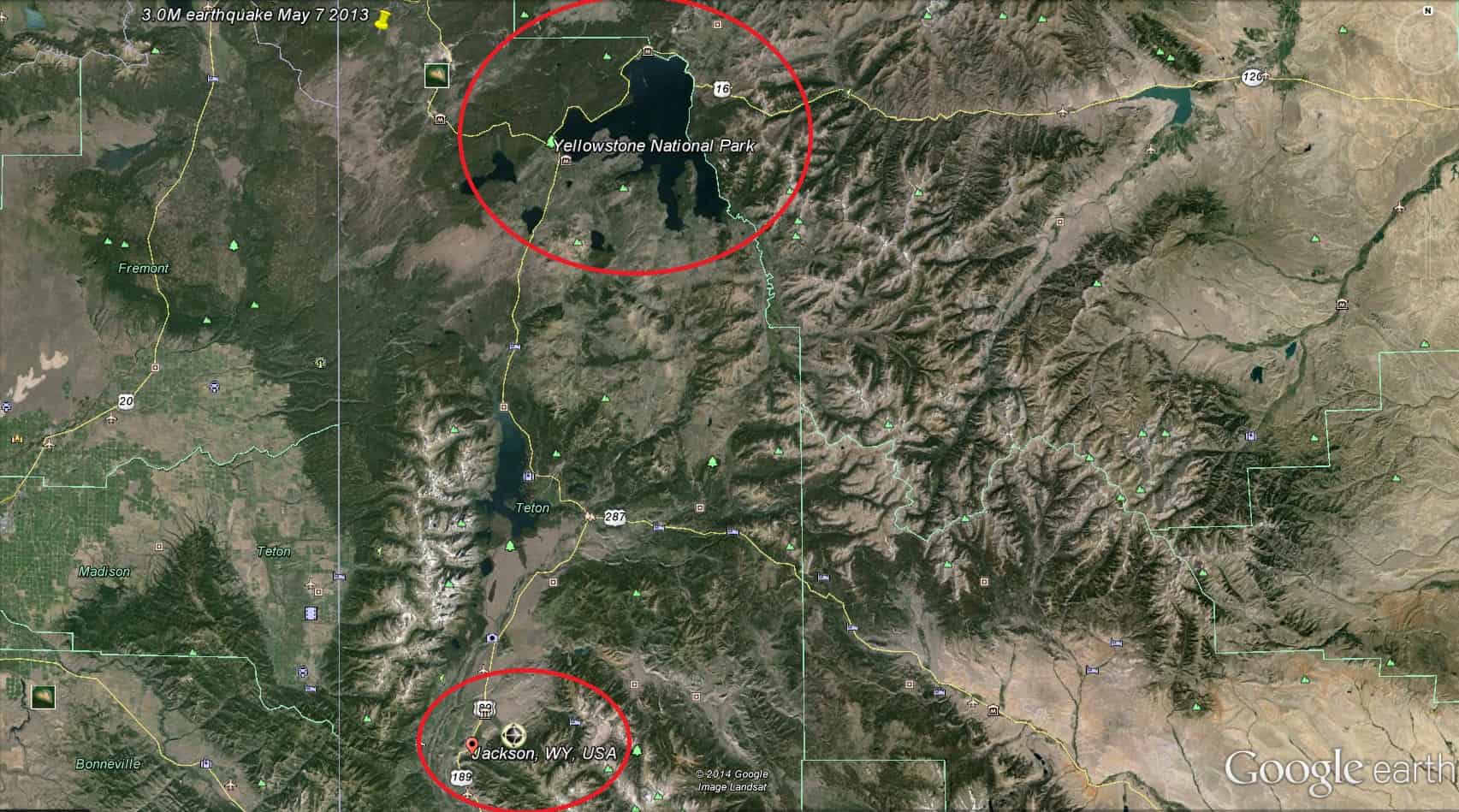 So far, we’ve seen a  day of interesting earthquakes, and geologic events.

The most dramatic movement of the weekend is shown via multiple pictures of a large hillside giving way in Jackson, Wyoming (the first major town just South of Yellowstone national park).

What is being reported as an “abrupt lurch” causes a large crack to appear in a hillside.  The large movement split a house in half, and moved roads / parking lots below.

“A rapid and sudden shift in a slow-moving landslide in Jackson, Wyo., has residents rattled and experts looking for answers.

The down-falling movement Friday created a fracture several feet deep in the ground beneath a house in the northwest Wyoming town in, causing it to split in two.

Workers who had been striving to stabilize the 100-feet-high hillside since early April, when town officials first noticed movement, were forced to suspend their efforts. Several other homes and businesses were also threatened by the abrupt land movement.”

Today (April 20th) was ANOTHER “surface” earthquake in Nevada…  in the same region as the previous multiple 3.0M+ events, and the same general area as the dormant volcanoes (Lunar Crater Complex).

The newest earthquake occurring due North of the previous surface events, this current 3.2M struck close to a long abandoned URANIUM mine.

Also, another earthquake struck due East of Nevada, near Salt Lake City, Utah.

Measuring 3.2M , at a depth of 4.2 miles — this event happened very close to the largest Copper mine in the world.  The Kennecot Copper mines just South of Salt Lake.

This earthquake cannot be related to the strip mine , unless they have a hidden record breaking depth shaft dug out that we don’t know about !

The midwest US then saw two back to back 4.0M + 3.7M earthquakes strike the Central Oklahoma fracking operation .

These two earthquakes happening within a few hundred feet of each other (AGAIN .. sigh…).

The earthquake epicenters just 750 feet away from the nearest well head.

Finally, on a more coincidental note, we saw an earthquake strike the Easter Island region .. on Easter day.

It is fairly rare to see sizable earthquakes in the Easter Island region, one every few months, to few years……. while not unheard of, it is a ‘coincidence’ worth making note of.   Two 5.0M+ events in the past few days.