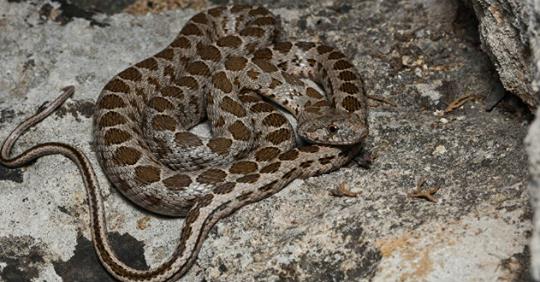 A snake wriggling out from between the stones of the Western Wall in search of a meal brought with it a message straight from Jewish mystical teachings; connecting the archetypal enemy of man with the High Priest in the Temple, and also, perhaps, serving as a harbinger of the Messiah.

Women who went to the Kotel (Western Wall) on Wednesday were shocked to see a snake crawling out from between the ancient stones. The Coin Snake, common to the region, is not venomous but it is similar in appearance to the deadly viper also found in Israel. The snake was probably seeking a meal of pigeons or eggs but it brought with it a powerful message.

A Hebrew language blogger quoted by Ynet News noted the serpent made its Jerusalem appearance during a hotly contested mayoral election, connecting it to the destruction of the Second Temple.

Another commentator saw a connection between the reptilian appearance and current events, referring to a recent head-on automobile accident near the Dead Sea that killed a family of eight and the horrific murder of 11 Jews in a Pittsburgh synagogue.

“How symbolic that this snake should appear at the place that is the heart of the Jewish people, where so many Jews were killed, at a time when Jews are still being killed. We have received a symbolic warning from these holy stones.”

Pointing to the pigeon that fled the snake in the video, Sod1820, a Hebrew language kabbalah site, cited Midrash (homiletic teachings), Israel is compared to a pigeon or dove, noted for the faithfulness in having a single partner in its lifetime. Such is Israel, faithful to Hashem (God, literally, ‘the name) even in times of danger.

“We are truly in the dangerous times that directly precede Mashiach (Messiah),” the article in Sod 1820 read. “Just as the pigeon is safe so long as it seeks shelter among the stones of the Temple Mount, the Jews are protected by the Torah commandments. When the pigeon comes out from the stones or the the Jews move away from the Torah, they are in danger.”

The site also claimed the appearance of a snake coming out of the stones of the Temple Mount could be seen as an auspicious sign. In gematria (Hebrew numerology) nachash (snake) נחש equals 358, the same as Moshiach (Messiah) משיח. The Zohar (the basis of Jewish mysticism) explained that the evil inclination, personified by the snake in Eden, will make a resurgence in the days before Messiah, tempted to come and drink sustenance from the enormous levels of holiness that will appear in the world in the end-of-days.

It was noted in Sod1820 that the snake appeared in the women’s prayer section, emphasizing its relevance to women. In Genesis, it is described how Eve was tempted into sin by the snake.

Now the serpent was the shrewdest of all the wild beasts that Hashem had made. He said to the woman, “Did Hashem really say: You shall not eat of any tree of the garden?” Genesis 3:1

According to Jewish tradition, the curse of Eve, represented by menstrual blood and labor pains, will be canceled out in the Messianic era. Before the Messiah, God will kill the archetypal snake, removing the curse of Eve.

Another connection between the lowly snake and holiness is implicit in the Hebrew words. The letters of the word nachash can be rearranged to spell choshen (breastplate), worn by the Kohen Gadol (high priest) in the Temple. The Zohar states that the tikkun (fixing) of the snake would be accomplished in the Third Temple by way of the breastplate. Embedded in the breastplate were 12 precious stones, each representing a tribe of Israel. When faced with a difficult situation, the kings of Israel could inquire and the stones of the breastplate would shine in sequence, providing them with a divine response to their question. This was a Tikkun for the snake which gave a deceitful response to Eve.

It does indeed seem like the Temple Mount is trying to speak to the Jewish people. About four months ago, a large piece of one of the stones weighing several hundred pounds suddenly fell, barely missing one of the women who came to pray at dawn. Another sign appeared on Hoshana Rabba, the last day of Sukkot, when a large cloud of mist began billowing up from the ground inside the Temple Mount Compound, surrounding the Dome of the rock for several minutes.

Matthew 12:34
O generation of vipers, how can ye, being evil, speak good things? for out of the abundance of the heart the mouth speaketh.

Matthew 23
1 Then spake Jesus to the multitude, and to his disciples,

2 Saying The scribes and the Pharisees sit in Moses’ seat:

3 All therefore whatsoever they bid you observe, that observe and do; but do not ye after their works: for they say, and do not.

4 For they bind heavy burdens and grievous to be borne, and lay them on men’s shoulders; but they themselves will not move them with one of their fingers.

5 But all their works they do for to be seen of men: they make broad their phylacteries, and enlarge the borders of their garments,

6 And love the uppermost rooms at feasts, and the chief seats in the synagogues,

7 And greetings in the markets, and to be called of men, Rabbi, Rabbi.

8 But be not ye called Rabbi: for one is your Master, even Christ; and all ye are brethren.

9 And call no man your father upon the earth: for one is your Father, which is in heaven.

10 Neither be ye called masters: for one is your Master, even Christ.

11 But he that is greatest among you shall be your servant.

13 But woe unto you, scribes and Pharisees, hypocrites! for ye shut up the kingdom of heaven against men: for ye neither go in yourselves, neither suffer ye them that are entering to go in.

14 Woe unto you, scribes and Pharisees, hypocrites! for ye devour widows’ houses, and for a pretence make long prayer: therefore ye shall receive the greater damnation.

15 Woe unto you, scribes and Pharisees, hypocrites! for ye compass sea and land to make one proselyte, and when he is made, ye make him twofold more the child of hell than yourselves.

17 Ye fools and blind: for whether is greater, the gold, or the temple that sanctifieth the gold?

18 And, Whosoever shall swear by the altar, it is nothing; but whosoever sweareth by the gift that is upon it, he is guilty.

19 Ye fools and blind: for whether is greater, the gift, or the altar that sanctifieth the gift?

20 Whoso therefore shall swear by the altar, sweareth by it, and by all things thereon.

21 And whoso shall swear by the temple, sweareth by it, and by him that dwelleth therein.

22 And he that shall swear by heaven, sweareth by the throne of God, and by him that sitteth thereon.

23 Woe unto you, scribes and Pharisees, hypocrites! for ye pay tithe of mint and anise and cummin, and have omitted the weightier matters of the law, judgment, mercy, and faith: these ought ye to have done, and not to leave the other undone.

24 Ye blind guides, which strain at a gnat, and swallow a camel.

25 Woe unto you, scribes and Pharisees, hypocrites! for ye make clean the outside of the cup and of the platter, but within they are full of extortion and excess.

26 Thou blind Pharisee, cleanse first that which is within the cup and platter, that the outside of them may be clean also.

27 Woe unto you, scribes and Pharisees, hypocrites! for ye are like unto whited sepulchres, which indeed appear beautiful outward, but are within full of dead men’s bones, and of all uncleanness.

28 Even so ye also outwardly appear righteous unto men, but within ye are full of hypocrisy and iniquity.

29 Woe unto you, scribes and Pharisees, hypocrites! because ye build the tombs of the prophets, and garnish the sepulchres of the righteous,

30 And say, If we had been in the days of our fathers, we would not have been partakers with them in the blood of the prophets.

31 Wherefore ye be witnesses unto yourselves, that ye are the children of them which killed the prophets.

32 Fill ye up then the measure of your fathers.

33 Ye serpents, ye generation of vipers, how can ye escape the damnation of hell?

34 Wherefore, behold, I send unto you prophets, and wise men, and scribes: and some of them ye shall kill and crucify; and some of them shall ye scourge in your synagogues, and persecute them from city to city:

35 That upon you may come all the righteous blood shed upon the earth, from the blood of righteous Abel unto the blood of Zacharias son of Barachias, whom ye slew between the temple and the altar.

36 Verily I say unto you, All these things shall come upon this generation.

37 O Jerusalem, Jerusalem, thou that killest the prophets, and stonest them which are sent unto thee, how often would I have gathered thy children together, even as a hen gathereth her chickens under her wings, and ye would not!

38 Behold, your house is left unto you desolate.

39 For I say unto you, Ye shall not see me henceforth, till ye shall say, Blessed is he that cometh in the name of the Lord.