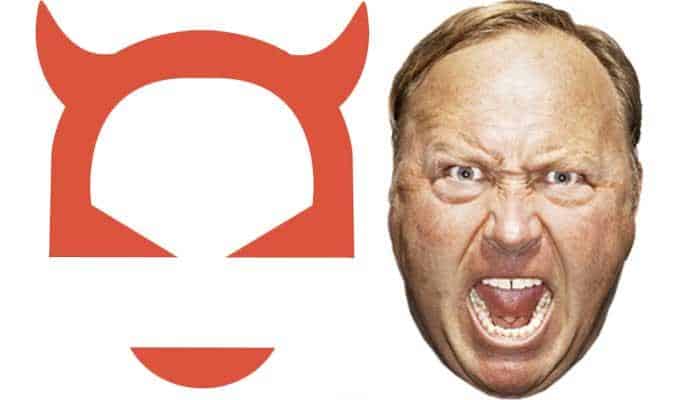 Magick—defined by Aleister Crowley as the art and science of causing change in conformity with will—has always been the vital core of all of the projects we undertake at The Disinformation Company. Whether via our website, publishing activities or our TV series, the idea of being able to influence reality in some beneficial way is what drives our activities. I’ve always considered The Disinformation Company Ltd. and our various activities to constitute a very complex spell.

The work of right-wing loud-mouth conspiracy celebrity Alex Jones, including a number of documentaries, like Endgame: Blueprint for Global Enslavement and New World Order, and his book The Answer to 1984 Is 1776, were distributed and or published by Satanist and Crowleyite Richard Metzger’s Disinformation Company, a company that connects technopagans and transhumanists. Metzger was the host of the TV show Disinformation, the Disinformation Company and its website Disinfo.com, featuring the tagline “everything you know is wrong,” that focuses on current affairs titles and seeks to expose alleged conspiracy theories, occultism, politics, news oddities and purported disinformation.

Metzger admits that from an early age he identified himself as a “warlock,” and that, “through a careful study of [Kenneth] Anger’s work and through this influence, in part, I continued to move towards combining my career ambitions of working in film, television and publishing with my private magical interests.”[1] Anger, the notorious producer of Crowley-inspired underground films, was the key figure around which swirled the network of Laurel Canyon musicians, occultists, and members the Manson Family and the Church of Satan. Ultimately, Meztger considers the Disinformation Company to be a “magick business,” and explains:

Magick—defined by Aleister Crowley as the art and science of causing change in conformity with will—has always been the vital core of all of the projects we undertake at The Disinformation Company. Whether via our website, publishing activities or our TV series, the idea of being able to influence reality in some beneficial way is what drives our activities. I’ve always considered The Disinformation Company Ltd. and our various activities to constitute a very complex spell.[2]

In addition to Alex Jones, the Disinformation Company has also been responsible for a number of apparently establishment-critical or conspiracy-inclined documentaries, such Outfoxed: Rupert Murdoch’s War on Journalism (2004), Uncovered: The Whole Truth About the Iraq War (2004), Bush Family Fortunes: The Best Democracy Money Can Buy (directed by Greg Palast), Wal-Mart: The High Cost of Low Price (2005), Iraq for Sale: The War Profiteers (2006), Slacker Uprising (a movie of Michael Moore’s tour of colleges in swing states during the 2004 election, as well as 9/11: Press for Truth (2006), 9/11 Mysteries (2006).

Disinformation, also known as Disinfo Nation, was a television show hosted by Metzger, which aired for two seasons on Channel 4’s late night “4Later” programming block in the UK. The sixteen 30-minute episodes produced for C4 were then cut down to four one-hour “specials,” intended for the Sci Fi Channel in America, but never aired due to their controversial content. Those four shows have subsequently been released on a DVD, with a second bonus disc presenting highlights of DisinfoCon, a twelve-hour event held in 2000, featuring Metzger, and a host of occult celebrities, including Marilyn Manson, Kenneth Anger, painter Joe Coleman, Douglas Rushkoff, Mark Pesce, Grant Morrison, Robert Anton Wilson, Todd Brendan Fahey and others.

The bizarre irony is that, Disinformation seems to produce just that: disinformation. A telling example is Metzger’s interview onDisinfo Nation of Ted Gunderson, a former FBI agent who is known for his investigations of a secret and widespread network of groups in the US who kidnap children and subject them to Satanic ritual abuse and human sacrifice. However, Metzger’s “documentary” is obviously a mockery, in the Discordian style of “humor,” and the playing of both sides typical of Robert Anton Wilson. Gunderson’s focus has been on abuse within the CIA and military establishment, and he mentions that southern California is a pivotal area of Satanic cult activity. However, although Meztger’s documentary claims to be a “deep and undercover look” at the “shadowy figures” in Satanism today, he juxtaposes Gunderson’s comments by reporting on a pitiful group of bumpkin Satanist wannabes.

Metzger’s video recalls a similar piece of disinformation produced by Britain’s Channel 4 in 1992, titled “Beyond Belief,” which purported to provide evidence of Satanic ritual abuse (SRA). The show was hosted by Andrew Boyd, an active opponent of SRA and author of Blasphemous Rumours, a book on the topic. “Beyond Belief” featured references to both law enforcement agencies and the opinions of medical experts, as well as an interview with the now debunked cult survivor “Jennifer” who claimed to have been part of the group which made the video.

Footage included obscene rituals involving a hooded man having ritual symbols carved into his flesh, a naked woman tied up and raped, and an apparent abortion on another restrained and possibly drugged woman. Another scene shows a young teenaged girl tied up and involved in a violent sexual act. These sequences are inter-posed with shots of explicit sex, human skulls and Satanic symbols.

However, the footage turned out to have been that of an experimental film created slightly less than a decade earlier by Genesis P-Orridge’s, Thee Temple ov Psychick Youth (TOPY), founded by Genesis P-Orridge, who are the forefront of technopaganism that underlies the philosophy of transhumanism. TOPY are an offshoot of the Illuminates of Thanateros, a society devoted to the practice of chaos magic, to which belonged Robert Anton Wilson, Timothy Leary and William S. Burroughs, who was a friend of P-Orridge.

Additionally, the footage itself had been partially funded during the 1980s by Channel 4, used previously as part of a program on experimental British cinema, and as an element of various performances by associated bands including P-Orridge’s experimental band Psychick TV.[3]