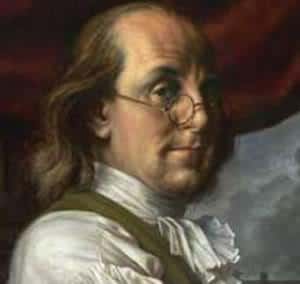 One of the most influential figures in the American Revolution was the writer, philosopher and scientist Benjamin Franklin. In February 1731, he became a Rosicrucian Mason and in 1734 Provincial Grand Master of Pennsylvania. While in France in the 1770’s, as a diplomat for the American colonies, Franklin was made Grand Master of the politically-oriented Masonic lodge called Neuf Soeurs in Paris.

We speak about the occult “conspiracy” as if it were going to erode the status quo.

In fact, as David Livingstone explains,  the occult conspiracy is the status quo. Modern Western “civilization” is built on the denial of spiritual Reality, i.e. man’s connection to God through our soul. The United States was created by occultists to impose this Godless, i.e. Satanic, dispensation on the world. Society truly is a satanic cult.

Like the French Revolution, the American Revolution created a new secular state, removing the authority of Christianity, and replacing it with ideals secretly promulgated by the secret societies.

These ideals were then enshrined in the American Declaration of Independence, the United States Bill of Rights and the French Declaration of the Rights of Man and of the Citizen. As a cryptic clue to their true origin, the Declaration of Human Rights adopted in France after the Revolution features several prominent occult symbols. 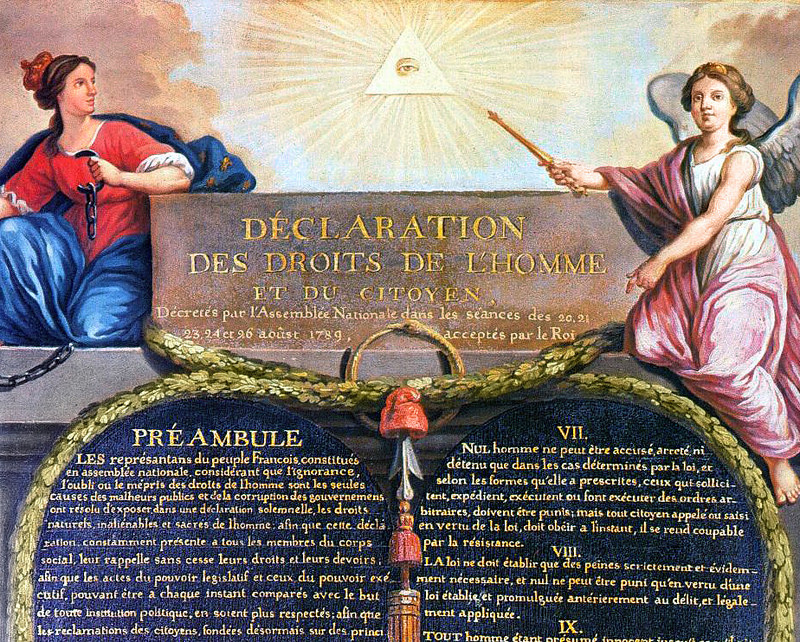 First, is the Illuminati symbol of the All Seeing Eye within a triangle, now found on the Great Seal of the United States. Underneath the title is an Ouroboros, an ancient Gnostic symbol of Satan, found in Western alchemy. Underneath it is a red Phrygian cap, derived from the pagan Mysteries of Mithras. The entire Declaration is guarded by the twin Masonic pillars. As the Bonnet, the orator at the Grand Orient Assembly boasted in 1904:

When the Bastille fell, Freemasonry had the supreme honour of giving to humanity the chart which it had lovingly elaborated. It was our Brother, de la Fayette, who first presented the ‘project of a declaration of the natural rights of the man and the citizen living in society,’ to be the first chapter of the Constitution.

On August 25, 1789, the Constituent Assembly, of which more than 300 members were Masons, definitely adopted, almost word for word, in the form determined upon in the Lodges, the text of the immortal Declaration of the Rights of Man.

Enlightenment ideals spread across Europe then to America, where they influenced Benjamin Franklin and Thomas Jefferson, among many others, and played a major role in the American Revolution.

All the members of the Boston Tea Party were Freemasons who belonged to the St. Andrews lodge in the city. Arguments about the taxes levied on the American colonies by the British finally came to a head in 1773, with the passing of the Tea Act.

The British, attempting to save the East India Company from bankruptcy, arranged for the delivery of tea directly to the colonies. In revolt against the new tax they had to pay, a group of Boston citizens disguised as Native Americans raided the East India Company’s ships in the city harbor, and threw their cargo overboard.

When the British introduced a bill in March 1774, closing the Boston port until compensation was paid to the East India Company for the loss of their goods, events quickly escalated. Then, a small force of colony militia tried to seize an ammunition store at Concord and fired on the British Redcoats, and the American Revolution had effectively begun.

In 1754, George Washington was fighting the French, and with the encouragement of John Adams, a Freemason and a member of the secret Order of the Dragon, had begun a military career which led him to become commander-in-chief of the rebel forces of the American Revolution. 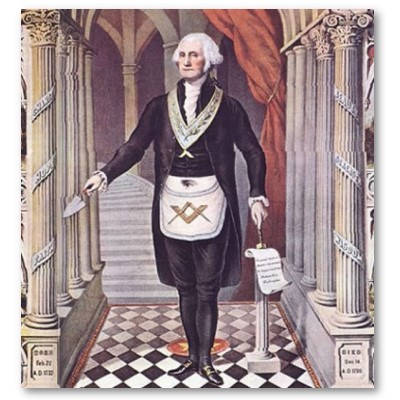 Like Washington, the majority of the military commanders of the American revolutionary army, which fought the British during the War of Independence, were practicing Freemasons. George Washington was himself a high-ranking Mason. He had taken his first degree initiation at a lodge in Fredericksburg, Virginia in 1734.

Among the fifty-six American rebels who signed the Declaration of Independence, only six were not members of the Masonic Order. Their success lead to the establishment of the first modern secular state. The purpose of removing the role of religion from the state was ostensibly to limit the sort of persecution that had become habitual in Europe.

More correctly, however, the goal of the illuminati was to remove religion, which it referred to euphemistically as “superstition” and “despotism”, from the public sphere. The American constitution itself was inspired by the French Revolution, and the ideals of Freemasonry. It enshrined “Liberty”, meaning freedom from the yoke of Christian morality, rules which it attempted to replace with “unalienable rights”, a concept originally discussed among the secret meetings of the Illuminati.

George Washington didn’t believe that “the Doctrines of the Illuminati, and principles of Jacobinism had not spread in the United States. On the contrary, no one is more truly satisfied of this fact than I am.”…

Jefferson, the writer of the Declaration of Independence, was responsible for infiltrating the Illuminati into the newly organized lodges of the “Scottish Rite” in New England. Jefferson defended Weishaupt saying:

As Weishaupt lived under the tyranny of a despot and priests, he knew that caution was necessary even in spreading information, and the principles of pure morality. This has given an air of mystery to his views, was the foundation of his banishment… If Weishaupt had written here, where no secrecy is necessary in our endeavors to render men wise and virtuous, he would not have thought of any secret machinery for that purpose.

In September 18, 1793, President George Washington dedicated the United States Capitol.  Dressed in Masonic apron, the president placed a silver plate on the cornerstone and covered it with the Masonic symbols of corn, oil and wine.

The plan of the city of Washington DC itself was designed by Freemason and architect Pierre Charles L’Enfante in the form of a pentagram, or five-pointed star. In 1848, in a Masonic ceremony, the cornerstone was laid of the Washington Monument, an obelisk or pillar, like those formerly dedicated to the dying gods of ancient Middle East. 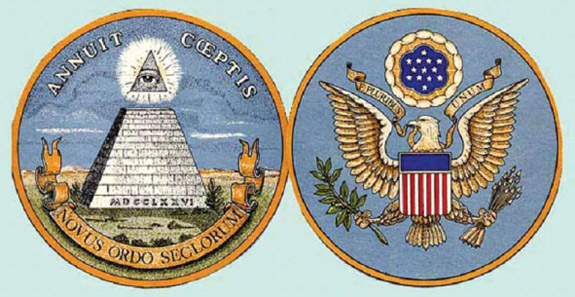 On 4 July 1776, the day the Declaration of Independence was adopted, Benjamin Franklin, Thomas Jefferson and John Adams were appointed by the Continental Congress to design the Great Seal of the new United States of America.

Franklin, having long been a Rosicrucian Sionist, had been sent to Paris as a colonial ambassador to seek military and financial help for the colonies in December 1776. While there, he came into contact with the Illuminati, perhaps with Weishaupt himself.

From this meeting Franklin learned the esoteric significance of the number 13 – the thirteenth being the day in October 1307 that the Templar persecution began – and the Illuminati plan for the 13 American colonies which were to become a New World democracy, a philosophical Atlantis. He also saw a sketch of the seal Weishaupt had produced for the Illuminati, which sought to unite Sion and the Templars.

The Illuminati Seal’s reverse side showed a Templar 13-layered, four-sided pyramid with its capstone missing. Above was a triangle in sun-rays and within it the All- Seeing Eye of Osiris and Sion, which some said represented Weishaupt’s spying system. On the bottom layer in Latin was a date, 1776, the year Weishaupt founded the Illuminati. The seal represented the Secret Doctrine of the Ages – the plan to build a new Atlantis in the New World. Weishaupt adopted the reverse side of the seal as the symbol of the Illuminati when he founded it on 1 May 1776.29

This is an excerpt from David Livingstone’s Black Terror, White Soldiers. His website is Conspiracy School.