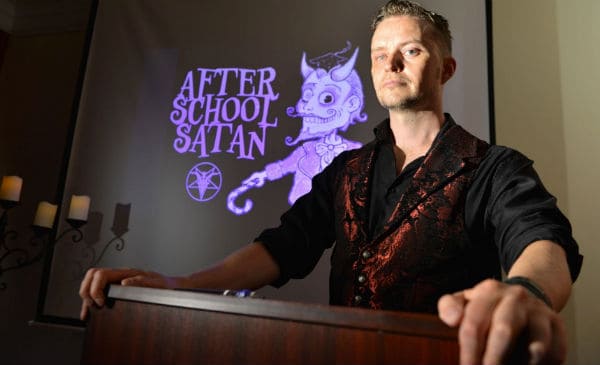 Doug Mesner, who goes by the professional name Lucien Greaves, is co-founder and spokesman for the Satanic Temple, a group of political activists who are seeking to establish After School Satan Clubs as a counterpart to fundamentalist Christian Good News Clubs, which they see as an attempt to infiltrate public education and erode the constitutional separation of church and state. (Josh Reynolds/For The Washington Post)
SALEM, Mass. —It’s a hot summer night, and leaders of the Satanic Temple have gathered in the crimson­-walled living room of a Victorian manse in this city renowned for its witch trials in the 17th century. They’re watching a sepia-toned video, in which children dance around a maypole, a spider crawls across a clown’s face and eerie, ambient chanting gives way to a backward, demonic voice-over. The group chuckles with approval.

They’re here plotting to bring their wisdom to the nation’s public elementary school children. They point out that Christian evangelical groups already have infiltrated the lives of America’s children through after-school religious programming in public schools, and they appear determined to give young students a choice: Jesus or Satan.

“It’s critical that children understand that there are multiple perspectives on all issues, and that they have a choice in how they think,” said Doug Mesner, the Satanic Temple’s co-founder.

On Monday, the group plans to introduce its After School Satan Club to public elementary schools, including one in Prince George’s County, petitioning school officials to allow them to open immediately as the academic year starts. Chapter heads from New York, Boston, Utah and Arizona were in Salem on July 10 talking strategy, with others from Minneapolis, Detroit, San Jose, New Orleans, Pittsburgh and Florida participating online. The promotional video, which feels like a mash-up of a horror movie trailer and a “Saturday Night Live” sketch, will serve to promote the new club along with its website —Afterschoolsatan.com.

The Satanic Temple — which has been offering tongue-in-cheek support for the fallen angel in public arenas that have embraced prayer and parochial ceremonies — is bringing its fight over constitutional separation of church and state to the nation’s schools.

But the group’s plan for public schoolchildren isn’t actually about promoting worship of the devil. The Satanic Temple doesn’t espouse a belief in the existence of a supernatural being that other religions identify solemnly as Satan, or Lucifer, or Beelzebub. The Temple rejects all forms of supernaturalism and is committed to the view that scientific rationality provides the best measure of reality.

According to Mesner, who goes by the professional name of Lucien Greaves, “Satan” is just a “metaphorical construct” intended to represent the rejection of all forms of tyranny over the human mind.

The curriculum for the proposed after-school clubs emphasizes the development of reasoning and social skills. The group says meetings will include a healthful snack, literature lesson, creative learning activities, a science lesson, puzzle solving and an art project. Every child will receive a membership card and must have a signed parental­ permission slip to attend.

“We think it’s important for kids to be able to see multiple points of view, to reason things through, to have empathy and feelings of benevolence for their fellow human beings,” said the Satanic Temple’s Utah chapter head, who goes by the name Chalice Blythe.

Lucien Greaves stands outside a courthouse in Salem, Mass. (Josh Reynolds/For The Washington Post)
The emphasis on multiple perspectives is a hint pointing to the Temple’s true foe. The group at first intends to roll out the clubs in a limited number of schools in districts that also host an evangelical Christian after-school program known as the Good News Club.

Good News Clubs, which are sponsored by an organization founded in 1937 called the Child Evangelism Fellowship (CEF), aim to reach children as young as 5 with a fundamentalist form of evangelical Christianity. For most of their history, Good News Clubs were largely excluded from public schools out of concern that their presence would violate the Constitution.

In 2001, in a case that commanded the resources of powerful legal advocacy groups on the religious right, including the Alliance Defending Freedom and the Liberty Counsel, the U.S. Supreme Court ruled that to exclude an after-school program on account of the religious views of its sponsors amounted to a violation of free-speech rights. The CEF then went on a tear, and by 2011, it reported 3,560 Good News Clubs, putting them in more than 5?percent of the nation’s public elementary schools.

The Satanic Temple makes no secret of its desire to use that same approach.

“We would like to thank the Liberty Counsel specifically for opening the doors to the After School Satan Clubs through their dedication to religious liberty,” Greaves explained to the gathering of chapter heads in Salem. “So, ‘the Satanic Temple leverages religious freedom laws that put after-school clubs in elementary schools nationwide.’ That’s going to be the message.”