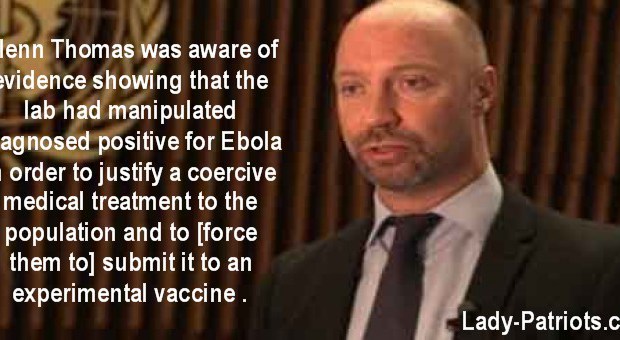 Who was Glen Thomas and why have we never heard of him? He was only brought to my attention today when I came upon a link to an Italian website that explained that he was a leading consultant in Geneva who was an expert in AIDS and the Ebola virus, and he was on the Boeing 777 Malaysia Airlines that crashed in the Russian controlled border of Ukraine. On July 17th, he left Amsterdam to go to a conference in Melbourne, Australia, where there was apparently going to be an important announcement made.

Thomas was also the coordinator of the media and was involved in the investigations that were bringing to light the issue of trial operations of Ebola virus in the laboratory of biological weapons at the hospital in Kenema. According to appuntiitaliani:

Glenn Thomas was aware of evidence showing that the lab had manipulated diagnosed positive for Ebola [on behalf of Tulane University] in order to justify a coercive medical treatment to the population and [force them] to submit it to an experimental vaccines that, in fact, sent their Ebola. Glenn Thomas had refused to go along with the cover up, unlike some who work at our Institute of Health and are now are well aware that Glenn Thomas was murdered. sic

Bill and Melinda Gates and George Soros have ties to the biological weapons labs located in Kenema, where they were going clinical trials in humans for the development of Ebola vaccine, and now, it appears that George Soros, through the Soros Foundation Open Society, is funding the laboratory of biological weapons.

The hospital in Kenema is also working with the Us Army Medical Research Institute of Infectious Disease, the sector of the American armed forces who is in charge of infectious diseases. Testing and experimentation, according to official statements, to find yellow fever vaccines and Lassa fever to immunize soldiers. Testing of bio-weapons, new virus to be used in war. According to the locals those who went for screening of Ebola at the center of Kenema came out sick.

Because of this, the Ministry of Health of Sierra Leone closed the lab and hospital on July 2rd and transferred patients in the treatment center of Kailahun and ordered the University of Tulane stop the test on Ebola. According Joseph Ippolito, Scientific Director of the Institute for Infectious Diseases “Lazzaro Spallanzani” in Rome:

“The outbreaks occur systematically. May appear when we least expect it. “And do not be surprised the United States President Barack Obama on July 31 has changed with an executive order the list of diseases for which it is necessary to quarantine inserting all those who present with fever and respiratory problems are contagious and so on risk to the pandemic. However, the influence is excluded. The mutant Ebola virus seems to move from person to person through sneezing and not just by coming into contact with blood, urine and body fluids of patients. Meanwhile, the California company, Mapp Biopharmaceuticals is working together with the Canadian Defyrur at ZMapp, cocktail of antibiotics to treat Ebola. On 14 January, Tekmira, which has a $ 140 million contract with the US Department of Defense, announced the testing of vaccines in humans. sic

There are so many conspiracies about the downing of the plane in the Ukraine and whether the Ebola outbreak is real or only hype by the WHO and their cohorts to scare us once again. We will only know the real answers to most of these questions with the passage of time. There are, however, too many coincidences to ignore in this Italian report. I say let’s just add this to the list of strange facts and keep an eye on our shady government and its even shadier friends, Bill and Melinda Gates, George Soros, and of course the United Nations and their slippery medical arm the WHO. Oh, and let’s just agree not to take any new vaccines.