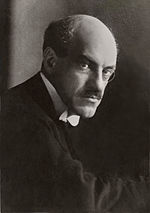 Here’s one for those of you who are still afraid that to deny the political state of Israel equivalent to being anti-Semitic.

More about the: Balfour Document.

(above, Edwin Montagu, a hero for assimilated Jews)

One hundred years ago, Jewish MP Edwin Montagu accused the British government of anti-Semitism for colluding with the Zionists.
(From March 11, 2006) Henry Makow | February 27, 2017When the British Cabinet issued the Balfour Declaration in 1917, it was over the strenuous objections of its only Jewish member, Edwin Montagu. But non-Jews, including many anti-Semites, tipped the scales. They saw Zionism as a way to advance British imperialism and the Masonic “New World Order.”

Montagu, who was the Secretary of State for India, told Prime Minister Lloyd George. “All my life I have been trying to get out of the ghetto. You want to force me back there.”

An assimilated Jew, Montagu regarded Judaism as a religion, and viewed Zionism as a “mischievous political creed, untenable by any patriotic citizen of the United Kingdom.”

His story teaches us that the New World Order is an elite conspiracy led by specific members of certain Jewish and non-Jewish dynastic families who often intermarried. It is not “Jewish” in terms of the Jewish people as a whole, who historically prefer assimilation.

“In May 1917, a committee representing the leading Jewish organizations published a statement in the London Times saying: “Emancipated Jews… have no separate political aspirations…the establishment of a Jewish nationality in Palestine founded on [the] theory of a Jewish homelessness, must have the effect of stamping the Jews as strangers in their native lands.” (The Cousinhood, p.260)

The Balfour Declaration promised Jews a “national home” in Palestine. Partly, it was payment to Zionists for getting the USA into WWI on Britain’s side. Zionist president Chaim Weismann fumed that Jewish opposition was the main stumbling block to consummating the deal.

The Jewish community was split. The Samuels and the Rothschilds favored the Balfour Declaration; Cohen, Magnus, Mountefiore and Montagu were against it.

“If it had been merely an issue between Zionist and non-Zionist factions within the community, there is little question that the latter would have won,” writes Chaim Bermant in “The Cousinhood.” “But there were the Gentile Zionists to consider and they carried the day.” (262)

These Gentiles, i.e. Freemasons, included Arthur Balfour, Lord Milner, Lord Lothian (Phillip Kerr) and Lord Robert Cecil. Chaim Weismann recognized that Zionism is part of a much larger game: “To [Cecil], the re-establishment of a Jewish Homeland in Palestine and the organization of the world in a great federation were complementary features in the next step in the management of human affairs…” (Reed, Controversy of Zion, p. 249.)

Georgetown University professor Caroll Quigley lists about 100 participants in this world government conspiracy in the Appendix of, “The Anglo American Establishment” (1981) They include the above names and Cecil Rhodes, Lionel Curtis, Wiliam T. Stead, Geoffrey Dawson and Earl Grey. I recognized only three Jews: Nathan Rothschild, Leopold Amery and Alfred Beit.

Quigley relates how a group of aristocratic families centered on the Cecils has dominated British politics for centuries. They spawned the secret society organized by Cecil Rhodes and Nathan Rothschild in 1891, which Rhodes called “a church for the extension of the British Empire.” (34) Known as “The Round Table” and the “Milner group,” its goal was world domination by the British elite and the recolonization of the US.

The “church” was Freemasonry. The politicians that backed Zionism were all high-ranking Masons. Some were probably Illuminati. “World government” is dedicated to enthroning Lucifer as God of this world. Zionism and Communism are Masonic organizations dedicated to this agenda.

A HERO FOR ASSIMILATED JEWS

Edwin Montagu, the second son of the silver bullion dealer Samuel Montagu, was caught between his father’s Orthodox Judaism and desire to be an Englishman. He rejected Judaism but was not about to abandon his Jewish identity. “I will always be a good Jew according to my lights,” he wrote his father, “my definition differing from yours.”

As a youth he chafed at having to observe the rituals and marry a Jewish girl. As an adult, he embraced the lifestyle of a highborn Englishman. On his country estate, he hunted and was a naturalist and ornithologist . “There was something… alien in the very depth of his affection for England,” Bermant remarks. (259)

A tall nerdy-looking man who wore a monocle, Montagu suffered the gibes of friends and enemies in silence. His “ugliness was obliterated by his charms,” wrote his friend Duff Cooper.”He had a huge ungainly body, a deep soft voice and dark eyes that sparkled with kindliness.” (253)

An able debater at Cambridge, Montagu caught the attention of H.H. Asquith, the President of the rival Oxford Union. He followed Asquith into politics and after the Liberal landslide of 1906 became his private secretary and friend. An able administrator and persuasive speaker, Montagu seemed destined for great things. 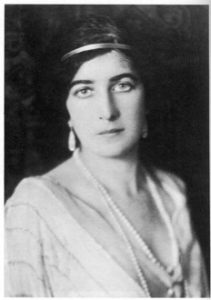 Asquith became Prime Minister in 1908. He and Montagu were both infatuated with Venetia Stanley a friend of Asquith’s daughter, and 35 years Asquith’s junior. When the Prime Minister’s amorous attentions became too much, Venetia married Montagu who was only eight years her senior.

Asquith was non-plused. Montague “is not a man: [he is] a bundle of moods and nerves and symptoms, intensely self-absorbed, and–but I won’t go on with the dismal catalogue.”

Like Montagu’s love for England, his love for Venetia was unrequited. She lived to “get the maximum amount of fun out of life,” had many affairs, including a child-out-of-wedlock (which Montague adopted) and burned through his fortune. But he ignored all this and, on the eve of his premature death at age 45, wrote to her, “I am miserable at going. You have made me very happy and I hope you will be happy always.” (267)

He also had a daughter out of wedlock. Montagu championed the rights of colonial subjects in India and Kenya and made himself unpopular with elements of the British establishment.

In 1917, Montagu fought the Balfour Declaration in cabinet and circulated a document accusing the government of anti-Semitism for making all British Jews “aliens and foreigners.” He said he would “willingly disenfranchise every Zionist [and was tempted to] proscribe the Zionist organization as illegal and against the national interest.”

Of course he was right. But despite being a banker’s son, he wasn’t aware of the Masonic/Zionist plan for world government. They dedicated 1.2 million troops to securing Palestine, almost losing the European War as a consequence. They had to replace Asquith and the Army Chief-of-Staff Gen. William Robertson to get it done.

Montagu was one of those rare Jews who tried to understand the reasons for anti-Semitism instead of blaming “irrational hate.”

“I have always recognized the unpopularity…of my community. We have obtained a far greater share of this country’s goods and opportunities than we are numerically entitled to. We reach on the whole maturity earlier, and therefore with people of our own age we compete unfairly. Many of us have been exclusive in our friendships and intolerant in our attitude, and I can easily understand that many a non-Jew in England wants to get rid of us.

But just as there is no community of thought and mode of life among Christian Englishmen, so there is not among Jewish Englishmen. More and more we are educated in public schools and at the Universities, and take our part in the politics, in the Army, in the Civil Service, of our country. And I am glad to think that the prejudices against inter-marriage are breaking down. But when the Jew has a national home, surely it follows that the impetus to deprive us of the rights of British citizenship must be enormously increased. Palestine will become the world’s Ghetto.”

Montagu was probably responsible for inserting the provision in the Balfour Declaration that said: “Nothing shall be done that may prejudice the civil and religious rights of the existing non-Jewish communities in Palestine or the rights and political status enjoyed by Jews in any other country.”

Jews are taught that they are scapegoats but they don’t learn it is not the fascists but the Communist globalists who are using them. By way of Zionist, Communist, Liberal, Feminist or Neo Con organizations, it dupes many Jews into advancing policies and beliefs that undercut the four pillars of human identity and social cohesion: race, religion, nation and family. This gives the appearance Jews in general are responsible for the New World Order.

It doesn’t help that many Jews ignorantly deny this conspiracy exists and cry “anti-Semite” every time a banker is criticized. It doesn’t help that many think they need Israel. In fact Israelis are being used to secure the Middle East for the Masonic British elite. The Israeli Supreme Court building, funded and designed by Rothschilds, is replete with Masonic symbolism.

Some of the Rothschilds and their Jewish allies are part of this satanic conspiracy. But most Jews put their countries first, and would want no part of world government. Edwin Montagu, a gentle, sincere civilized man, is an example of such a Jew and an inspiration to us all.