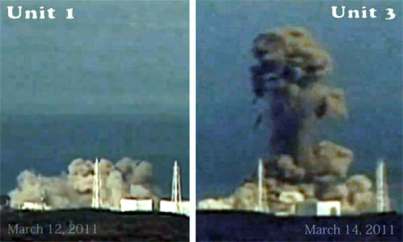 Just 1 week after this web site broke news of Fukushima radiation in fish & seafood, California officials have cancelled commercial crab season “indefinitely” citing “protection of the public health.” Yet in a classic case of “if you can’t dazzle them with brilliance, baffle them with bull****” California officials have offered the following absurd reason to the public for this action:

Global warming has heated the ocean to the point that a particular algae, Pseudo-Nitzchia, is blooming in great swaths along California’s coast.  The algae produces a neurotoxin called domoic acid which accumulates in crab and other seafood. If consumed by humans the neurotoxin can cause memory loss, tremors or death.

However, workers in the California Fish and Game Commission have revealed to SuperStation95 that the real reason for cancelling this $60 million per year commercial seafood season is: Radiation contamination of seafood from the Fukushima nuclear disaster in Japan.

According to these workers, who requested anonymity because they fear losing their jobs, radiation levels in local crab, especially Rock crab, were so high that officials feared anyone who consumed the crabs would suffer immediate sickness traceable directly back to the seafood.  “If people started connecting the dots proving radiation in seafood was making them sick, it would utterly destroy California’s seafood industry in days” they said.

To cover up the industry-destroying truth, high ranking state political officials instructed the Fish and Wildlife Commission that it would be better to say “some other reason for cancelling the crab season, so as not to panic the public or wreck our industry.”  The thinking by the political people was that as long as the public was protected from eating the contaminated food, they didn’t need to know the real reason for it.

This is yet another nail in the coffin of California and other west coast sates, all of which are now receiving ever-increasing dosages of radioactive materials carried to north America by prevailing ocean currents from Fukushima, Japan.

In March, 2011 an earthquake off the coast of Japan caused a Tsunami which hit the Fukushima Nuclear Power Plant, causing three reactors to melt down and explode.