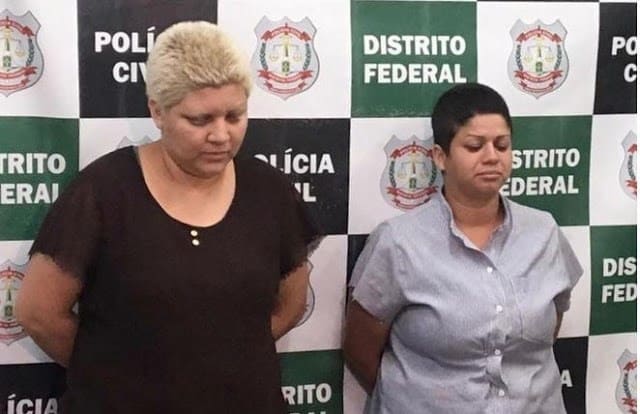 This report is a GLARING example of the publicly endorsed madness that is “gender choice.” It does not matter what a person does with their genitals, SCIENCE (which our society WORSHIPS) shows us that DNA DOES NOT CHANGE! Even by the world’s standards, the people pushing this agenda should be psychoanalyzed by their own empirical, naturalistic, occult-based system and committed to an institution.

Rhuan Maycon, 9, was stabbed to death on May 31st by his mother, Rosana da Silva Candido, 27, and lesbian partner Kacyla Damasceno Pessao, 28.

The boy was stabbed to death as he slept after suffering for a year after a botched gender reassignment surgery.

According to Brazil’s Child Protective Services, the boy had a“kind of a sex-change surgery. After removing the penis, they sewed the mutilated region and improvised a version of a female genital organ, making a cut in the groin”

The surgery had apparently been performed with no medical supervision after Rhuan’s mother had decided to turn her son into a girl.

Rhuan’s father had previously contacted Child Protective Services and the police after expressing concerns about the welfare of his son.

Rhuan’s mother and her partner were able to evade the authorities by moving across states and around the country.

Child Protective Services were unable to keep up or save Rhuan’s young life.

Rhuan’s father told the press, “We tried to save Rhuan. We published messages on the social media, we contacted police and the Child Protective Services. No one helped us.”

It appears that Rhuan had suffered extensive psychological trauma from his mother for being male before his penis was severed and his eventual death. – Source

Only yesterday I was filling out a form in a doctor’s office that had been created with the “politically correct” gender terms of male, female, “identify as” and “prefer not to say.”  I simply could not get my mind around how an ENTIRE SOCIETY is accepting these rules when such a small minority actually supports them. Our society is increasingly faced with these contradictions and hypocrisies and yet the general public, including Christians tolerate them for fear of being labelled “intolerant” or worse yet “haters.”

So, what do we DO? What is the call to action? Brothers and sisters, I encourage you to speak up, to speak the truth in love. Maybe we aren’t called to be a street preacher like David Lynn but we can speak up in small ways, like, when faced with one of those “gender appropriate” forms, we might cross out the LIES and write something on the paper like: “These terms are scientifically patently false and therefor represent a psychotic point of view. Do you really want to present yourselves to new clients this way?” Whatever it takes and however the Father leads, but we need to start speaking up before we are completely forbidden from doing so.

I have no illusion about our ability to stop the biblical advancement of evil. But we are called to be SALT and LIGHT in this dark world. (Matthew 5:13-16) If we do not courageously SHINE GOD’s TRUTH and HOPE, thus fulfilling our purpose in remaining here upon the earth, we will be asked to account for it when we meet Him face to face. ( (Rom 14:12) (2 Cor 5:10)

Now that I’ve said that, I should probably address the question of judgment and the believer. As a believer, our sins are under the blood. There is nothing we can do to become more saved, but we are exhorted to ADD TO our faith so that we are not unfruitful in our knowledge of Jesus Christ, (2 Pet 1:5-8)

When we are in Christ we are NOT JUDGED according to our works like the DEAD will be (those not found in Christ) (Rev 20:12)

These are done out of LOVE for our Father and Savior in response to the LOVE He bestowed upon us.

We may think we shouldn’t make waves and that we should just peaceably go about our business, and it’s true we are to be at peace with all men, but the verse reads “if it is possible.” We are not intended to do that to the point of sitting silently in the face of evil such as what we are witnessing. (Rom 12:18) We need to be careful not to use Romans 12:18 as an excuse not to speak up (to be at peace with all men), when the real reason for our silence is the fear of man. We are a loving people and we want people to like us. But we wrongly tell ourselves that BEING LIKED is the way to be a good witness for the Lord. The Bible tells us we are not supposed to be friends with the world but that we are supposed to JUDGE the world. (Jas 4:4) (2 Cor 6:2-3) Speaking the TRUTH with LOVE is loving as God loves. Being NICE and leaving people in their deception and sin is not.

Here’s a good sermon on the subject of the judgment and rewards of the saints:

Much more could be said about this but none are more important than taking these things as opportunities to share the hope that is found only in Jesus Christ. In my own life I am finding that I am being called more and more to speak up, stand up, to call evil evil, and boldly proclaim Jesus’ life, death, resurrection and ascension into heaven (the gospel.) I pray you join me as the Father opens the eyes of His people and calls the lost to faith in Jesus.

Also, as always, keep in mind that these things are being brought out in the open in a social engineered plan to divide and cause chaos. So be prayerful and led by the Holy Spirit to answer these things with godliness and self control. (Gal 5:22-23)

Walk in LOVE. Pray for the family involved in the above tragedy. God bless you.