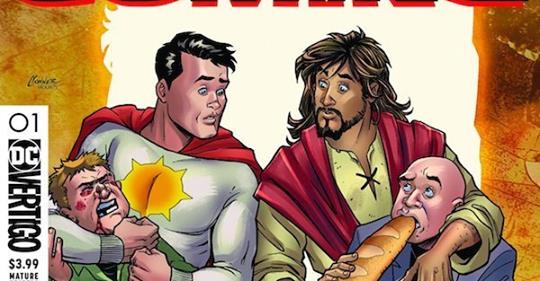 “This is coming out on 3/6/19 (369) The blasphemy is no longer discreet. The witchcraft is no longer being done in secret. The One who is being provoked WILL RETURN. I hope and pray that you all give your hearts to the Truth Jesus Christ and are ready for that day.” – Sarah Grant

DC Comics to introduce Jesus Christ as new superhero with a Distorted Telling of the Savior  By Jeannie Law, Christian Post Reporter

DC Comics is introducing its newest superhero, Jesus Christ, adapted from the most popular book in history and with its own twist.

The new series, titled “Second Coming,” is set to debut in March. The series,written by Mark Russell and illustrated by Richard Pace, has already been labeled by some Christians as “blasphemous.”

According to Comic Book Resources, Russell mixed in his own idea of Christianity in the animated work by claiming that Jesus needed to return to earth to learn how to become the “true messiah” from a Superman-like character called Sun-man.

“Witness the return of Jesus Christ, as He is sent on a most holy mission by God to learn what it takes to be the true messiah of mankind by becoming roommates with the world’s favorite savior: the all-powerful superhero Sun-Man, the Last Son of Krispex! But when Christ returns to earth, he’s shocked to discover what has become of his gospel — and now, he aims to set the record straight,” the comic description reads.

In a past interview with Bleeding Cool, Russell explained that the series centers on the fact that God “was so upset with Jesus’ performance the first time he came to earth since he was arrested so soon and crucified shortly after, that he has kept him locked up since then.”

When the fictional version of God sees Sun-Man, he tells the comic Jesus, “That’s what I wanted for you.”

“He sends Jesus down to learn from this superhero and they end up learning from each other,” Russell added. “They learn the limitations of each other’s approach to the world and its problems.”

The theme of the comic is noticeably birthed from Russel’s own idea of Christianity, shared in the books he authored, God Is Disappointed in You and Apocrypha Now. Both revealed that he believes people have “really misunderstood” the Bible and the Christian faith “doesn’t really base itself on what [Jesus] taught, particularly in the modern Evangelical megachurches.”

The “Second Coming” series is hoping to “set the record straight” regarding Russel’s interpretation of the Gospel of Jesus.