According to the Fallen Angel/Human hybrid narrative, the Nephilim are said to be part angel, part human and as such they have no hope of redemption. Appearing on the scene as the Christian “answer” to the Ancient Alien deception and the media’s as well as the Catholic Church’s “Alien Agenda,” The Nephilim are allegedly “damned” because, they are a corruption of man, who God man made in His own image. It occurred to me; shouldn’t the designation of any one group of humanity as “damned” and “beyond redemption” give us pause? In today’s world of “terrorist watch lists,” “war on Islam,” it’s pretty easy to imagine the general public, as well as Christians being rallied to support the “elimination of the Nephilim!” This has much greater potential than the racism we’ve known to date and fits well with the need to raise support for the elimination of ‘undesirables’, who are ‘unfit’ for the politically correct, Ecumenical, New World Order. In light of all this, the Dispensationalist’s “Millennial Age” teaching begins to look like genocidal global tyranny!

The Dispensational, “End Times” interpretation of prophecy sets the stage for these mythical beings’ return to earth at a time of great chaos. According to Dispensationalism, this will be during a 7-year time of tribulation just before Christ comes to establish an earthly kingdom for a thousand years. Let’s look at the Dispensational timeline and where it came from.

We trace the roots of Dispensationalism to the early 1800s with Margaret McDonald and John Nelson Darby who taught that evil would soon take control of the world under the rule of a single man; the Antichrist, who is the beast in the Book of Revelation and who will fight Christ in the final Battle of Armageddon. This teaching found most of its’ followers in rural, less educated Christians, until the mid-1960s when it became popular among more educated main-stream independent and Southern Baptist churches.

This theological system was created in the 1830’s by Plymouth Brethren founder, John Nelson Darby (Nov. 18, 1800 — April 29, 1882). His doctrines are found in C. I. Scofield’s Old Scofield Study Bible—copyright 1909 and 1917 and are the foundation for other dispensational works. Like Pentecostalism, the popular teachings on biblical prophecy known as Dispensationalism were not popularized until the nineteenth and early twentieth centuries, during a great rise in occult spiritualism.

Dispensationalism’s “Pre-Trib Rapture Theory” is a dangerous teaching advancing an exclusive Jewish political agenda that undermines genuine Christianity. The Dispensational rapture doctrine with its’ false teaching of an unconditional support of Israel was created by occultists; Freemasons, the “Illuminati”, globalists, to keep lower and middle class Christians in line.

Why would Christians be concerned about Communism or the New World Order taking over the world if they believe the rapture could happen at any time? Instead of being concerned about Totalitarianism, Socialism, World Banking, National Debt, etc., they are focused on the dates of Christ’s impending “any day now” return. The evidences of occultists being behind these fallacies can be found on all their own material.

If you doubt this, just look at the background of the people who presented it and the occult symbols throughout. 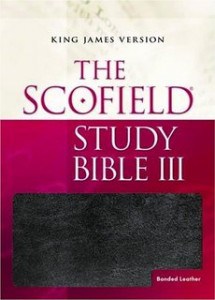 Notice the “dot within a circle” occult symbol on the cover of the Scofield Bible. There’s plenty of information online about occult symbolism, so I’ll leave you with just that one example.

There are theosophical links between John Nelson Darby, CI Scofield, Edward Irving. J.N.Darby’s “Darby Bible” is full of theosophical terminology. George Müeller, a godly man who was once a member of the Plymouth Brethren and close friend of Darby, said of his doctrine:

“My brother, I am a constant reader of my Bible, and I soon found that what I was taught to believe did not always agree with what my Bible said. I came to see that I must either part company with John Darby, or my precious Bible, and I chose to cling to my Bible and part from Mr. Darby.” -George Müeller, a contemporary and one-time supporter of Darby quoted by Robert Cameron in his book, Scriptural Truth About the Lord’s Return, pages 146-147

Darby was a Freemason.  Freemasons have a direct link to Theosophy, the mystery religions, and the study of the Qabalah. Like Ribera, Darby taught seven distinct eras, or “dispensations” of God’s dealings with man as well as “futurism”, the teaching that Antichrist would come after a 7-year period of tribulation in the future.

Most of the church rejected Darby’s new teaching as bad doctrine, but several years later these teachings were popularized by CI Scofield, who was commissioned to create what’s known as the Scofield Bible by a secret group wealthy men known as the “The Secret Six”. Scofield’s Illuminati and occult connections are many. He created a King James Bible with notes in the margins that cast a decidedly pro-Israel light on scripture. Many people started to read Scofield’s linear notes as if they held as much authority as the Bible itself.

Dispensationalism was further promoted through Dallas Theological Seminary and remains the standard teaching throughout the major seminaries and continues to be the most popular interpretation of the prophecies in the books of Daniel and Revelation.

You will find these teachings in virtually every pseudo-Christian cult today (ie. Mormonism, JW…)

John Nelson Darby, Cyrus Scofield and others started to weave Jewish fables into God’s Truth. The reworking of God’s Word and Biblical doctrine unfolded in the eighteenth century and had the fingerprints of Freemasonry and Zionistism all over them. Dispensationalism was the first teaching to present ‘one-single-man’ as an interpretation of the antichrist of scripture, which is a way of preparing the masses for the acceptance of the god-man Messiah of the Kabbalah.

Why am I going into this?

Because this dispensational background makes the modern day teaching of the “return of the Nephilim” possible! For one thing, interpreting Matthew 24; “as in the days of Noah” to mean the Nephilim are going to return to earth again, only works in a Dispensational, Futuristic (Catholic) End Times eschatological view, the same view that is being presented by those behind the New World Order communist government. The story that the Nephilim are the offspring of a Fallen Angel/ Human women sexual union is only being taught by Dispensationalists; Christians who support physical Israel and a separate plan of salvation for the Jews (Christian Zionists), including people who are involved in the Hebrew Roots Movement, (which puts Christians back under the yoke of the Hebraic law, a teaching that the apostle Paul utterly destroys in the book of Galatians).

The Fallen Angel/Human hybrid teaching is sensational. But it comes at a time when we are being presented with technologies that are so far beyond our comprehension that we’re not as skeptical of it as we normally would be. “Angels mating with humans? Heck, I’ve heard of stranger things, I guess it’s possible!” Many things seem surreal these days. But Jesus warned us that deceptive times would come.

6)    The Life Of Charles Parham – by Mrs Charles Fox Parham