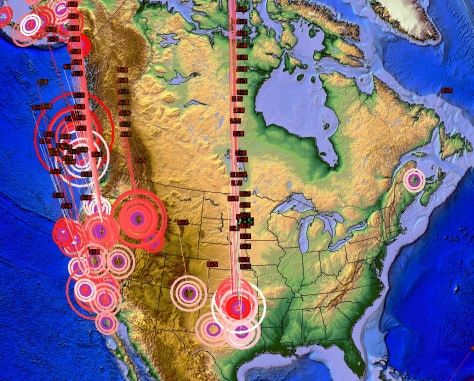 “And great earthquakes shall be in divers places, and famines, and pestilences; and fearful sights and great signs shall there be from heaven.”  Luke 21:11

On January 4th, 2014 I issued a full earthquake update, along with a forecast.  All the areas named have now shown movement – including the East coast in Canada (along the edge of the craton) 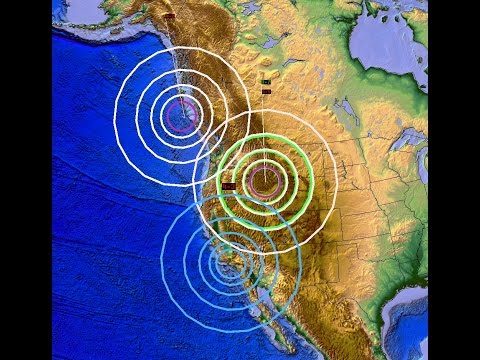 As expected, we have now seen movement occur in Texas, Colorado, Idaho, Wyoming, and Southeast Canada (near new brunswick).

Additionally, reports in Tennessee of “rumbles and booms” shaking the ground.

As always, the media IGNORES the obvious earthquake activity in the adjacent areas due to literal IGNORANCE on the subject of earthquakes indeed being related to one another over large distances.

This reports says the USGS measured an event, but then denies it’s an earthquake – WITHOUT giving a real cause they rule out an earthquake?!

“Just before 8 p.m. Wednesday, multiple law enforcement agencies in Greene County said they received several reports of a booming sound that coincided with the ground shaking and even windows rattling.

Even Greene County EMA Director Bill Brown said he felt the ground shake in Mosheim at the scene of the Appalachian Forest Products fire.

“We’ve had reports of ground shaking from the southern to the northern end of the county,” Brown told News Channel 11.

Brown said he was certain the reports were not related to the the fire.

He at first thought it could be an earthquake, an assumption made by several people who  contacted News Channel 11 Wednesday night.  The USGS earthquake map showed a 2.4 magnitute earthquake Tuesday night at 8:09 p.m..”

Moving on from Tennessee, we must make note of the full earthquake swarm (over 11 events in less than 24 hours) which occurred in Dallas Texas, as well as noteworthy movement in Snyder Texas, Trinidad Colorado, and central Oklahoma.  ALL HAPPENING AT FRACKING (oil + gas) OPERATIONS!


The Texas movement began with BACK TO BACK 3.5M events approximately 230 miles apart.  Proving earthquakes are related over a distance (disproving modern geology teaching).

See the video I made as the earthquakes in Texas took place: 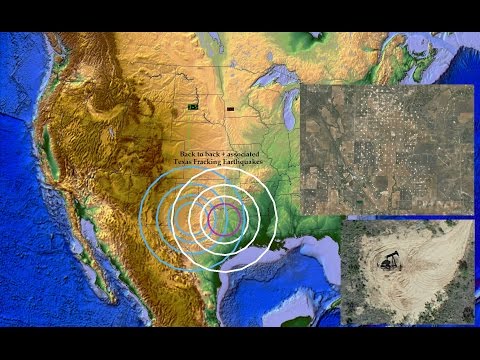 Within an hour of the back to back tembolars in Dallas Texas / Snyder Texas , there were TWO MORE back to back earthquakes.  This time around, both earthquakes were 3.7 magnitude.

One 3.7 earthquake struck again in Dallas Texas near the abandoned well, and another 3.7M occurred in Southern Colorado (near the trinidad fracking operation).  Over 500 miles apart within minutes of each other.  (again proving modern geology teaching wrong – they say one earthquake is not related to another earthquake elsewhere!)

Watch my video updated on the Colorado / Texas back to back events: 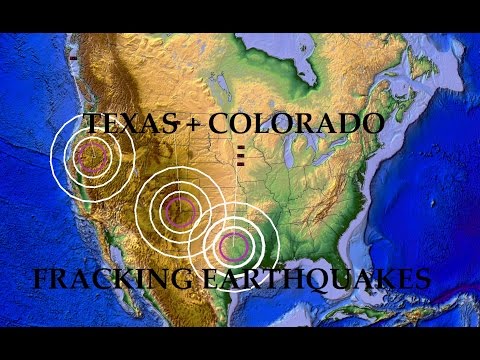 After the seismic unrest in Texas, and Colorado, we saw a large 6.7M earthquake strike near Panama in central America.

This large event took place following several other smaller events to the North, and Southeast of the Panama epicenter.

See my video update on the movement in Panama:  (all three of these videos made within hours of each other – it was a busy night!) 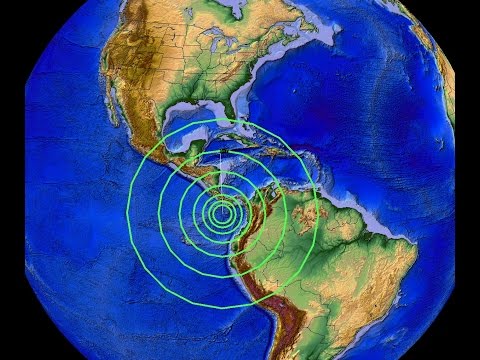 Move forward one day, and a new round of events occurred worthy of noting.

The Vancouver earthquake was followed later in the day by a 4.0 magnitude to the Southeast (again along the edge of the craton), at the Oklahoma fracking operation.

This Oklahoma 4.0M is a sign of greater pressure building upon the Western + Southern edge of the craton.

Overall, in light of the movement along the East coast in Canada, and taking the “booms + shakes” in Eastern Tennessee into account — we need to be on watch for movement between Tennessee and New Brunswick Canada.

Also, we need to be watching for LARGER movement along the edge of the craton – also need to be watching all dormant volcanoes on the West coast – specifically California – if these start showing movement we WILL need to watch for a larger earthquake event in the near term.

I’ve now got my eye keenly trained on Southern California for the signs of possible larger movement.  Salton Sea to Los Angeles  be on watch next few days!

For certain I will be doing a new earthquake forecast in the next day due to this new East coast movement, and new watch for California coming in out of the blue.