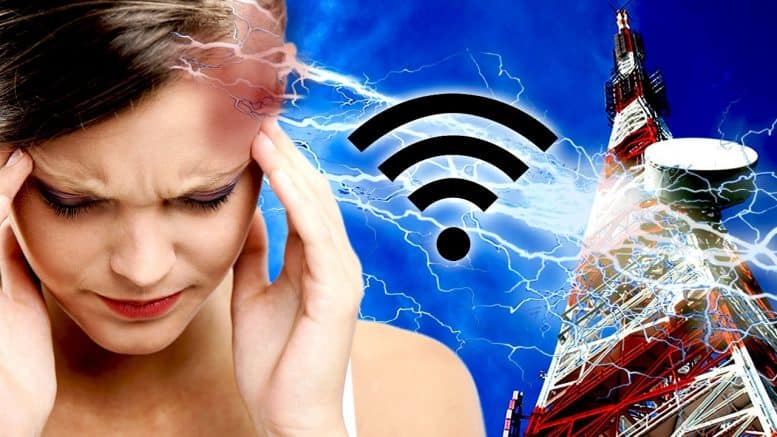 Of all the things assaulting and affecting our health, I’ve found it hardest to convince people of the effects of electromagnetic fields. Maybe it’s because they feel helpless to do anything to protect themselves. There are things you can do.

Can you see and feel its effects in the air?  Of course you can, but you don’t know how to identify it correctly!  It’s all around us like an ocean of electromagnetic frequencies that we are swimming in, which are pulsed out from many more sources than we can begin to imagine and, more confoundedly, not accept that they are causing damage to all living elements, especially young children who are most vulnerable.

I’m talking about electromagnetic fields (EMFs) or radiofrequencies (RFs), which have become so ubiquitous that we haven’t stopped to realize what’s been happening to us—especially children exposed to Wi-Fi in schools—and how trees [4] and other plant life are being damaged.

Where do these EMFs come from?

Many people today are beginning to realize that they function in what they call a ‘fog’ and can’t figure out why.  They are run down with no energy and constantly enervated.  Does that sound like you or someone you know, especially your children?  Then think electromagnetic hypersensitivity (EHS).

Probably nothing is more unfriendly to your personal health and environment than some iPhones [3] and other ‘smart’ appliances you either wear on your person, e.g., a ‘live’ cell phone, or have in very constant close proximity, e.g., laptop computer that sits on your lap or legs!

Most, if not all, ‘smart’ appliances operate using microwave technologies, which are not as safe as we are led to believe, since that industry likes to promote fifty-to-sixty-year-old ‘science’ that indicates no thermal effects when, in fact, for numerous years non-thermal adverse health effects have been documented and published which, if allowed to be mainstreamed, would cost the microwave industry loads of money to correct the industry’s lies (think tobacco science) about what they obviously know but do everything to keep regulatory authorities from knowing and implementing protocols to deal with for human health safety.

Here’s a chart put out by the EPA of EMF radiation dangers for popular appliances:

Did you know that the frequency inside a microwave oven is 2.45 billion hertz?

Is your microwave oven door seal safe and not leaking?  When was the last time you had it checked or calibrated professionally?  Here’s more important information about operating microwave ovens.  Furthermore, there’s something that I’d like to point out regarding microwave cooked food taken from that website:

Increased stress (evidence by the increase of leukocyte)

NOTE: Leukocyte response can indicate pathogenic effects such as poisoning and cell damage.

Cuts down on lysozyme activity

Milk heated to 72 degrees lost a full 96% of all immunoglobulin-A antibodies, which fight invading microbes.


Researcher’s conclusion: microwaving likely reduces and reverses the potential benefits of food, above and beyond the harm heating itself causes.

In my July 2016 book Eat to Beat Disease, Foods Medicinal Qualities,  I discuss in great detail the scientific research, etc. about microwave cooking and what happens to microwaved food.

In the above chart, note the DANGER ZONES for most sources.  One of the most unbelievable recent marketing and ‘politically correct’ strategies for energy conservation has been the introduction of compact fluorescent light (CFL) bulbs [1], which are so difficult to dispose of because of their hazmat status (5 mgs +- of mercury [Hg] in each) to replace incandescent light bulbs, which consumers used for ‘ages’!  Besides containing mercury powder, they emit EMFs too [2]!

However, that chart does not include such appliances as baby monitors, routers, Wi-Fi, etc.  But the recently utility-mandated retrofitted AMI Smart Meters for home and business utilities really do a number on emitting EMFs/RFs. So, what does the above have to do with the potential dangers of electromagnetic fields and their effects on the environment?

One answer I offer is the strategies and deceptive techniques the microwave industry, including states public utility commissions plus utilities, utilize to keep adverse non-thermal health effects information under wraps by denying that such health effects have been documented scientifically.

In the European Union, there’s a different approach that needs to be implemented.  It’s the European Union Parliament’s Resolution 1815 adopted in 2011, which goes into detail about the potential dangers of EMFs and their effects.  Here, in part, are some of that Resolution’s statements, which ought to raise red flags for everyone, including state public utility commissions:

No. 2   All populations are now exposed in varying degrees to electromagnetic fields, the levels of which will continue to increase as technology advances.

No. 4  While electrical and electromagnetic fields in certain frequency bands have wholly beneficial effects which are applied in medicine, other non-ionising frequencies, whether from extremely low frequencies, power lines or certain high frequency waves used in the fields of radar, telecommunications and mobile telephony, appear to have more or less potentially harmful, non-thermal, biological effects on plants, insects and animals as well as the human body, even when exposed to levels that are below the official threshold values.  [CJF emphasis added]

[That’s something public utility commissions everywhere should be concerned about regarding AMI Smart Meters retrofitted by utility companies, but totally disregard.  Will consumers start lawsuits against both utility companies and PUCs for fraud and harmful business practices?]

No. 5   Moreover, the precautionary principle should be applied when scientific evaluation does not allow the risk to be determined with sufficient certainty. Given the context of growing exposure of the population, in particular that of vulnerable groups such as young people and children, there could be extremely high human and economic costs if early warnings are neglected.

No. 6  … there is still a lack of reaction to known or emerging environmental and health risks and virtually systematic delays in adopting and implementing effective preventive measures. Waiting for high levels of scientific and clinical proof before taking action to prevent well-known risks can lead to very high health and economic costs, as was the case with asbestos, leaded petrol and tobacco.

[What I’ve underscored above is critical in the deliberate EMF debacle no one in federal, state or local governments wants to address!]

No. 7   Moreover, the Assembly notes that the problem of electromagnetic fields or waves and their potential consequences for the environment and health has clear parallels with other current issues, such as the licensing of medication, chemicals, pesticides, heavy metals or genetically modified organisms. It therefore highlights that the issue of independence and credibility of scientific expertise is crucial to accomplish a transparent and balanced assessment of potential negative impacts on the environment and human health.

[No. 7 is where the rubber meets the road!  However, no one is doing anything about it, in my opinion, especially those who are responsible for creating the problems, the microwave industry itself, and government regulatory agencies, who should know better than to allow such harms to occur, thereby acting as accessories to the fact, I think.]

All the recommendations set forth in Item 8 of the EU’s Resolution should be implemented immediately, if not sooner, by federal and state utility and telecommunications regulatory agencies, but don’t hold your breath.  Money talks too much, and lobbyists certainly do a very effective job for utilities and microwave industries to keep their ‘tobacco science’ about microwaves in the ‘dark ages’ of science and technology.