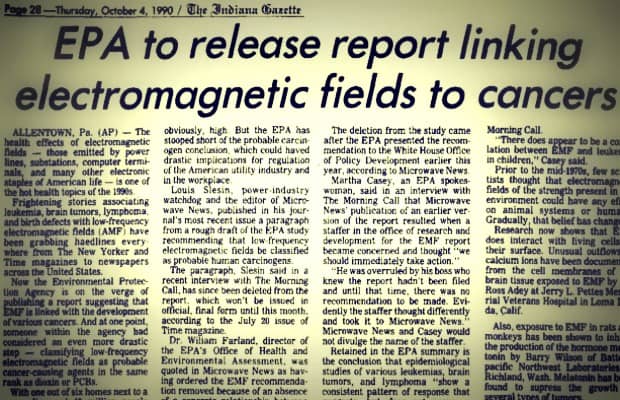 Isn’t it ironic the newspaper thought to tack a Radio Shack add onto the end of this article?

The clipping, published in the October 4, 1990 edition of The Indiana Gazette, reported:

“Now the Environmental Protection Agency is on the verge of publishing a report suggesting that EMF is linked with the development of various cancers. And at one point, someone within the agency had considered an even more drastic step — classifying low-frequency electromagnetic fields as probable cancer-causing agents in the same rank as dioxin or PCBs.”

Wow. They were all set to classify low frequency EMFs in the same rank as dioxin, a highly dangerous chemical thought by some even today to be among the most toxic substances out there.

“But the EPA has stopped short of the probable carcinogen conclusion, which could have drastic implications for regulation of the American utility industry and in the workplace. Louis Slesin, power-industry watchdog and the editor of Microwave News, published in his journal’s most recent issue a paragraph from a rough draft of the EPA study recommending that low-frequency electromagnetic fields be classified as probable human carcinogens.

The paragraph, Slesin said in a recent interview with The Morning Call, has since been deleted from the report, which won’t be issued in official, final form until this month, according to the July 20 issue of TIME magazine.”

According to Microwave News, the paragraph was deleted after the EPA presented its initial draft of report to the White House Office of Policy and Development.

Isn’t that nice? Guess the megacorporations who run the government were none too pleased that the truth might come out about the harmful effects of EMFs and what that information might do to bottom lines and what was about grow into a booming business that would essentially take over our entire world in the next thirty years.

Keep in mind this is from 1990, well before every single one of us was bathing in EMFs all day long from wi-fi hotspots, cell phones, computers, iPads, and a thousand other “smart” devices… Well before there were millions of antennas popping up all over the country on school buildings and playgrounds, in church steeples, on our water towers, all along our roadways…

The Internet of Things isn’t even fully implemented yet, but now we already live in a world that has “smart pajamas” for small children which are encoded so they can be scanned with smart devices that will then read bedtime stories to them over wi-fi.

The reason Slesin ended up with the original draft of the report, by the way, is that the EPA staffer in the office of research and development for the report who was “overruled” on the probable carcinogen finding turned whistleblower after they took the paragraph out and leaked the original draft to Microwave News.

At the time the Gazette article was printed, the report did, however, retain information regarding the fact that epidemiological studies of brain tumors, lymphomas, and leukemias showed a causal link with EMFs, though no concrete link was admitted obviously.

In addition, the article goes on to note that extremely low EMFs inhibit the production of the tumor-suppressing hormone melatonin and that these fields have also been known to inhibit the immune system.

The point is, even back then, they knew. They knew how dangerous this was to our health, and they failed to fully inform the public.

Now look where we are.

(For more on how you can protect yourself and your family from dangerous EMF, this guide is a quick read that breaks it all down easily and gives some great tips for reducing your exposure.

P.S. — A follow-up on Earthing