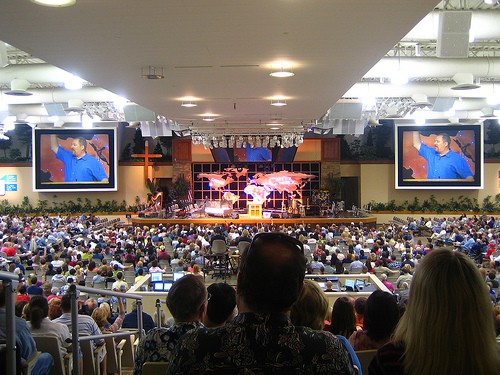 The small community church in your neighborhood has now been supplanted by the tri-county Mega Church. Essentially, your local church has been, “put out of business”. How ? By not offending seekers and discussing topics like homosexuality, abortion, feminism or national sovereignty.

Ever wondered why you hear so many corporate buzz words and phrases at your church?  Words like “global”, “result or purpose driven” and “facilitation”.

The seeker-driven movement is the brain child of Rick Warren and more importantly his mentor, Peter Drucker. Educated at the infamous Frankfurt School, Drucker received his Phd in International Law. Frankfurt School for all intents and purposes was a Marxist think tank which merged Marxism and state-subsidized Corporations together in a hybridized version of what we see in our economy today.

Except its ideals were now being applied in the church to form an ecumenical or interfaith One World Religion as well as economy. The small community church in your neighborhood has now been supplanted by the tri-county Mega Church. Essentially, your local church has been, “put out of business”. How ? By not offending seekers and discussing topics like homosexuality, abortion, feminism or national sovereignty.

The ” Small Group” now has a facilitator not a teacher. Employing the Hegelian Dialectic, any dissenters are isolated and synthesized into the body at large, absorbed. This is something the Frankfurt School excelled at teaching. 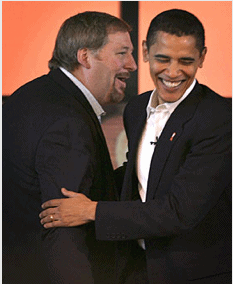 Warren and many other Evangelicals are chummy with or members of The Council on Foreign Relations, a body dedicated to eroding national sovereignty and cultural traditions and replacing them with a Supra National compact eerily like the One World Economy and Religion spoken of in the book of Revelation. ( Which is rarely or ever discussed). The post modern mega church seems more intent on rendering aid and relief to third world countries than helping widows, orphans, the under or unemployed right in their own county. This is another troubling question to many.

So why do many Evangelical Christians rightly warn of a coming New World Order/Cabalist/Luciferian government, yet participate in its implementation? Many mistakenly believe only the “Left” is the guilty party in such an endeavor, not “their guy or party” . The dire warning from Jesus himself states that “many” will be deceived in the Olivet Discourse of Matthew 24: 4 thru 5. So many have to be deceived !

The Cabalist Bankers fund the Evangelical  Movements and Mega Churches thru backdoor methods and often installing unscrupulous leaders and pastors. Many may be blackmailed or even mind controlled in MK ultra-esque fashion. The average parishioners will never know the goings on behind the scenes.

Discernment is often as easy as following the money. When a crime is committed, a good detective usually gets right on this trail. These crimes are more far-reaching and affect all of mankind however.
Sexualization of our children, global food and water control, endless wars and Neo Eugenics are a few examples. Will you use your God-given discernment, even if it’s uncomfortable or if it conflicts with your self interests ? Will you ask yourselves difficult questions or ask your church leaders ?

Or will you carry on with the post-modern mentality ? Orwellian Newspeak isn’t just for media or news, it works equally well on the religious beliefs of the masses. The financial backers of many ministries often make their money from less than Christian methods and industries. No one seems concerned or inquisitive as long as the check clears.

501C tax exemption status of churches makes it difficult to track where tithes and offerings are going furthering the trail of corruption within churches. Although most still do many good works and aid human suffering world wide, the leaders live a social status way beyond the average person in the pew.

A mega church pastor is more of a secular celebrity than ever before; book deals, conferences and talk show appearances often distance them from the flock and alienate the churches from their leadership. The unwillingness to speak on sinful things within or outside the churches doesn’t seem to raise a flag as it once did. Apathy about the media, academia, entertainment, the government and now places of worship is rampant. Christians have their own “common core” teachings to challenge.

The leaders of the Evangelical Church, whether fully aware and diabolical in their schemes or simply deceived or mistaken are steering the movement directly into a One World Religion and Economy. It’s been percolating for decades and now is culminating right in our midst. The Protestant Church is now simply a place of entertainment and group therapy that avoids little or any context of original sin or God’s divine and holy nature.

No better example can be found than in the commercialized Christian music itself. It echoes the construct of the emergent church. Mediocre and musically bland, repetitive or even void of any reference to the Holiness of God. There are even some disturbing indicators of unambiguous and purposeful Luciferian subversion in modern Christian music. I use Michael W. Smith as an example simply because he is one of the biggest names in contemporary Christian music in the past three decades. He seems to epitomize the mundane vanilla songs that do little to grab the spiritual attention of the listener. He has often offered the praises of his favorite band, The Alan Parson’s Project, a band with the album, ‘ Eye in the sky’ featuring the all seeing eye of Horus on the cover. Or how about their album, “Lucifer” ?

Simply an oversight of optics or not wanting to judge by Smith ? You be the judge. Perhaps the music venue “Rocket Town” in Nashville that Smith was or may still be involved in too is a hickup ? A venue that has hosted such openly Satanic bands as Killwhitney Dead, Bloodwake, Promisedthreat and Goatblaster. According to some that have dared to inquire about this, there is no good answer from Rocket Town about these conflicts of spiritual interests.

Just a few examples and there are many more troublesome questions about the modern Evangelical Protestant Church, its political ties, culture and music. The Luciferian/Cabalist leaders are hiding in plain sight just as the icons of Esoteric Gnosticism they embed in everyday life. Little need for heavy camouflage now; they control the language most of the seminaries teach the flock. The flock just doesn’t realize that they are on the menu.

Simply by redefining tenets and vocabulary to steer it into progressive thought, the great faiths have been neutered. Many look for grotesque demonic things or some even for hidden esoteric signs but few listen or ponder the vernacular of the new Emergent Church.

They are the precursor to a One World Religion and the “Global Citizen”  who will practice it. There must be a “collective” salvation and a disavowal of individual thought to be a part of the church universal.

New Age mysticism or  One World Consciousness ?  Neither is benign. We live in an inverted world where evil has become good and good evil. So don’t be surprised when people raise questions about the Evangelical Church and they’re met with, ” You’re the accuser of the brethren”.

You become disdained or ostracized for a legitimate concern. Matthew 7:15 “Beware of false prophets which come to you in sheep’s clothing but inwardly are ravening wolves”.

Brian Priest Bio- I was raised in the Birmingham metro area where I have lived all of my life. I love my community and state of Alabama. I work in the Maintenance Department at a Research University where I have worked for the past fourteen years. I have two wonderful step children and three step grandchildren. I have a deep passion for World History ( Especially the rise and fall of Empires), Conspiracy Discovery, The New World Order origins and current mechanisms and Comparative Religion study. I am a rank and file concerned citizen just like you. My grandparents ( America’s greatest Generation) instilled into me an Evangelical Christian world view and work ethic. My grandfather taught Sunday School for 40 years at his local church and worked as a machinist at one of our once burgeoning iron and steel plants. As a layman I have been concerned about the Evangelical community ever since the Ecumenical movements of the 1980s and 90s. Honestly I haven’t attended church very much in the past 7 or 8 years. Overtime work, aging parents and grandparents plus my own family are some of the reasons I didn’t, but more importantly, I feel alienated and distant from the experience and learning I once knew. So I embarked on a trail of curiosity to find out just why and how the places of worship we once knew morphed into the post modern church. I would like to share my observations and those of others with you and hope to pique your curiosity as well. Queries about The Prosperity Movement, Dominionism, Zionism, the Charismatic Movement and the Global Business model applied to the church need to asked, I hope and pray that you too will ask and find answers.