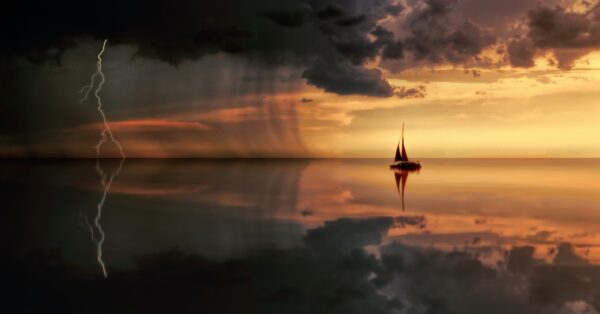 What is this I’m feeling? A gnawing in my gut that works its way up to dizzy my head. I’m sure you feel it too as the daily dose of doom invades your awareness and you encounter those whose oblivion is nothing short of stupifying. (Oh, how they make my heart sink!) I watched a video yesterday that someone caught from a hotel room of a swimmer in the ocean who didn’t know there was a shark swimming right alongside them. Yea, it’s kind of like that.

A recent source of horror? Both Nobel prize winning Dr Luc Monagnier and ex-chief scientist of Pfizer Dr. Mike Yeadon have issued foreboding predictions that all the vaccinated will die within two years. Maybe you’ve seen it.

“All vaccinated people will die within 2 years. Nobel laureate Luc Montagnier has confirmed that there is no chance of survival for people who have received any form of the vaccine. In the shocking interview, the world’s leading virologist stated bluntly: “There is no hope and no possible treatment for those who have already been vaccinated. We must be prepared to cremate the bodies.” The scientific genius backed up the claims of other eminent virologists after studying the ingredients of the vaccine. “They will all die from antibody-dependent enhancement. That is all that can be said.

“Dr. Mike Yeadon, ex-chief scientist of Pfizer has raised alarm “that it is now too late to save any person who has been injected with any C-19 vaccine. He urges those who have not yet been injected with the deadly compound to fight for the continuation of humans and the lives of their children.”

The world-acclaimed immunologist goes on to outline the process which he says “will kill the vast majority of people now alive. Immediately on receipt of the first injection around 0.8% of people died within 2 weeks.

The survivors have a life expectancy of two years on average. But this is decreased with every top-up or “booster” injection.

“Supplemental vaccine are in development to cause degradation of specific organs – including heart, lungs and brain.”

Having been intimately acquainted with goals of research and development of the Pharmaceutical giant, Pfizer for two decades, Yeadon claims that the final objective of the currently administered regime of vaccination can only be a mass depopulation event, which will make all the World Wars combined seem like a Mickey Mouse production.”

He concluded, “Billions are already condemned to certain, unchangeable and agonizing death. Each person who has received the injections will certainly die prematurely and three years is a generous estimate for how long they can expect to remain alive.”” removed from original lifesitenews article but is viewable here

Looking into the two scientists a bit, they seem to be involved in the alleged mRNA manipulation technology, which does not appear to be possible (see my DNA series). So, while the shot definitely appears to have enough poisons in it to do a great deal of harm, I’m inclined to lump Yeadon and Monagnier together with the ilk of Madej, Tennpenney and Buttar ( <-Please watch the linked video by 7GrainsofSalt if you haven’t already.)

Anyway, division continues to abound as the masks come off, some places having just let it go while others are trying to enforce “vaccinations” amidst protest and doomsday predictions. Yet in spite of all that, in spite of rockets killing Palestinians and in spite of mass flooding in various parts of the world (and please be in prayer for those who are going through all those things), there is a decided peacefulness about going to the store and seeing people’s smiling faces again.

But we’ve learned better than to let our guard down, haven’t we? We know this was all an occult initiation. So, we search social media and online news sources for what we should expect next. Will they continue this “pandemic” charade until every single freedom (privilege) is gone? Will they be allowed to take it to a level of compliance where no one can move without consenting to being injected with their poisons? Will their horrible stated goal of reducing the world population become a reality? Will countless people die? Or will the divisions just continue to escalate until their planned “solution” appears on the scene?

STAY TUNED TO THAT SHINY HANDHELD DEVICE THAT ABSORBS ALL THE TIME YOU DO HAVE! (I’m as guilty as everyone else of that)

The simple answer is that I don’t know what’s going to happen next. So I’ll turn to what I do know:

I do know that upon His cross Jesus Christ conquered death forever. (Col 2:15)

I do know that He freed us from the bondage we were under through the FEAR of death. (Hebrews 2:15)

Sadly, I’m seeing a whole lot of fear of death being circulated online among Christians, who are being divided along with the rest of the world over things like the “pandemic,” the shot, support of Israel and countless teachers and doctrines. Taking it all in, Grand Master Mason Albert Pike’s prediction seems to fit.

“…We shall unleash the Nihilists and the atheists, and we shall provoke a formidable social cataclysm which in all its horror will show clearly to the nations the effect of absolute atheism, origin of savagery and of the most bloody turmoil. Then everywhere, the citizens, obliged to defend themselves against the world minority of revolutionaries, will exterminate those destroyers of civilization, and the multitude, disillusioned with Christianity, whose deistic spirits will from that moment be without compass or direction, anxious for an ideal, but without knowing where to render its adoration, will receive the true light through the universal manifestation of the pure doctrine of Lucifer, brought finally out in the public view. This manifestation will result from the general reactionary movement which will follow the destruction of Christianity and atheism, both conquered and exterminated at the same time.”

It boggles the mind. Will they actually be allowed to bring that all about?

Keep in mind that Pike’s words just spell out what the enemy wants us to know of his plans, but it is God’s plans that will come about and He gave us HIS Word as our guide. So, what does God’s Word tell us? And here, we run into some of the divisions among Christians about the proper interpretation of eschatology (prophecy concerned with the final events in history). If you’re familiar with my site you know that I hold to Historic-Amillennialism and that I’ve posted many articles supporting that view. Rather than viewing the book of Revelation as a prophetic timeline, Historic Amillennialism views the scenes in it as symbolic of an increasingly intense spiritual battle throughout the church age until the time of Christ’s return. I believe we err tragically if we miss viewing all these things through the lens of one vital truth, and that is that,

His (spiritual) Kingdom Has Come!

I’m working on another article on that subject. But for now, I’ll share just one more thing I do know, and it’s that this gnawing feeling dissolves when I climb into the very real refuge of His Word!